Researchers: Midwest could be center of a 'green ammonia' revolution

Michael Reese sees a time when the wind turbines that tower over Midwestern crop fields will produce not just electricity, but fertilizer as well.

Reese, the renewable energy director of the West Central Research and Outreach Center at the University of Minnesota, Morris, believes wind power will one day support a robust regional market for ammonia, a liquid fertilizer and fuel source. The only other elements needed for the process are water and air.

Producing ammonia using wind or solar energy is carbon-free, providing a greener alternative to current fossil fuel-based methods responsible for around 1.8% of global carbon emissions, according to the Royal Society of London.

“Rather than buying all your inputs, maybe you could actually own the process to make your inputs,” Reese suggested to a group touring the University of Minnesota, Morris, during the 2022 Midwest Farm Energy Conference held this month.

Reese and other University of Minnesota researchers have been studying the promise of “green” ammonia, which is produced using a low-emission, renewable-based process. The resulting product is cleaner than “gray” ammonia, its fossil-fuel-intensive counterpart.

One of the centerpieces of the University of Minnesota’s Morris campus, while not the most architecturally pleasing, is its hydrogen and nitrogen production plant. Two small tin sheds hide under the shadow of a 230-foot wind turbine, each containing a jumble of pipes and gauges. A white tank that can hold up to 3,000 gallons of ammonia hugs the chain-link fence surrounding the complex.

It’s in these buildings where nitrogen and hydrogen are converted into ammonia using a method known as the Haber-Bosch process. Using the energy from the wind turbine, the facility can produce six pounds of the substance per hour.

Reese concedes that the $3 million facility, which was the world’s first wind-to-ammonia plant when it was commissioned in 2013, is small and can’t produce ammonia at the levels a modern commercial plant would. But, using $10 million in Energy Department funding, the university plans to build a larger one capable of producing one metric ton of ammonia per day.

The current market for green ammonia is small and undeveloped. Ammonia production within the U.S. has increased 46% between 2015 and 2020, but much of that is still produced using natural gas even though more companies have been using carbon capture and storage technology to reduce emissions. 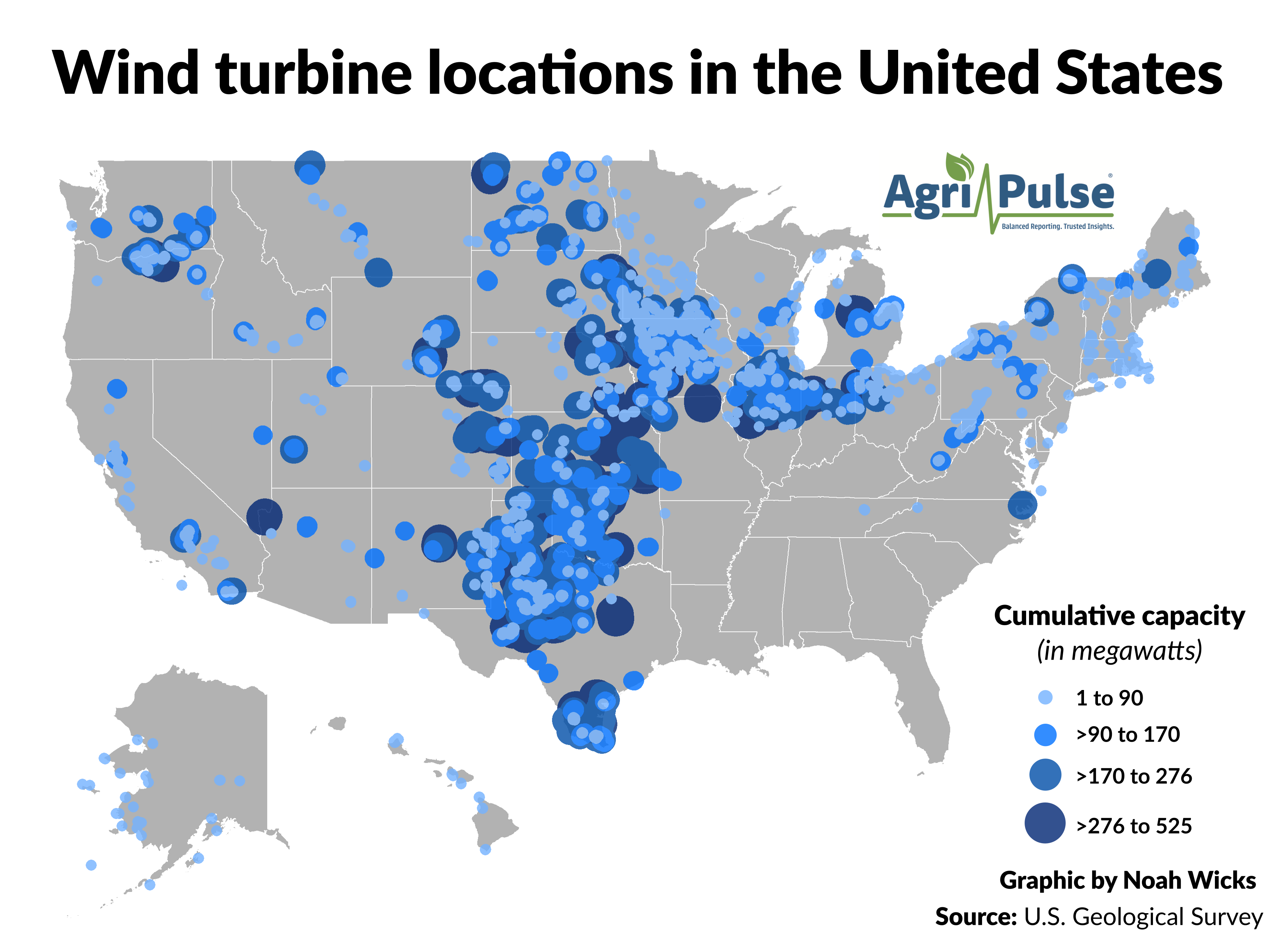 While some small research-based plants like the University of Minnesota’s do exist in the U.S., only one large facility is reportedly in the works. Ammonia giant CF Industries is building a plant in Donaldsonville, Louisiana, that will be able to produce 20,000 tons of green ammonia per year.

As companies and lawmakers make promises to cut down on greenhouse gas emissions, Reese and other researchers believe the market for green ammonia will grow in the future. The creation of new renewable energy sources, particularly in the Midwest, could also create the right conditions for the green ammonia market to take off.

Wind-based electricity production in the U.S. has surged over the last 20 years, leaping from 6 billion kilowatt-hours in 2000 to about 380 billion kilowatt-hours in 2021, according to the U.S. Energy Information Administration. The Midwest and the Central region, which consists of Nebraska, Kansas, Oklahoma and parts of South Dakota, are two of the main growth areas.

This electricity has other uses, however, and green ammonia producers would have to compete with local energy cooperatives and other users for wind energy. Reese predicts that it would take around 170,000 megawatts of wind power to produce all of the ammonia to fill the current needs of U.S. agriculture.

High renewable energy production costs are also a challenge, especially compared to the price of natural gas. David Ripplinger, a bioenergy economist at North Dakota State University, expects to see the costs associated with wind energy drop, which should help the green ammonia industry take off.

“We're almost certainly going to have a future where the price of green ammonia in the United States is going to be the lowest cost,” Ripplinger said. “But we're not there right now.”

A proposed “clean hydrogen” tax credit to spur growth in the industry was an original part of the Build Back Better bill but was scrapped during negotiations. The final 2021 infrastructure bill did include $8 billion to be doled out to four new DOE-specified “hydrogen hubs,” which could help fund projects in the industry.

Advancements in ammonia production and use will help build markets as well. Green ammonia, for instance, can not only be used as a fertilizer, but can also be used to dry grain or to fuel tractors and other pieces of farm machinery.

Seamus Kane, a professor in the Department of Mechanical Engineering at the University of Minnesota, has helped convert a John Deere 6400 tractor to run on a blend of up to 50% ammonia and 50% diesel. The idea is that farmers will be able to reduce their fossil fuel emissions from engines with a resource already being used on their farms. 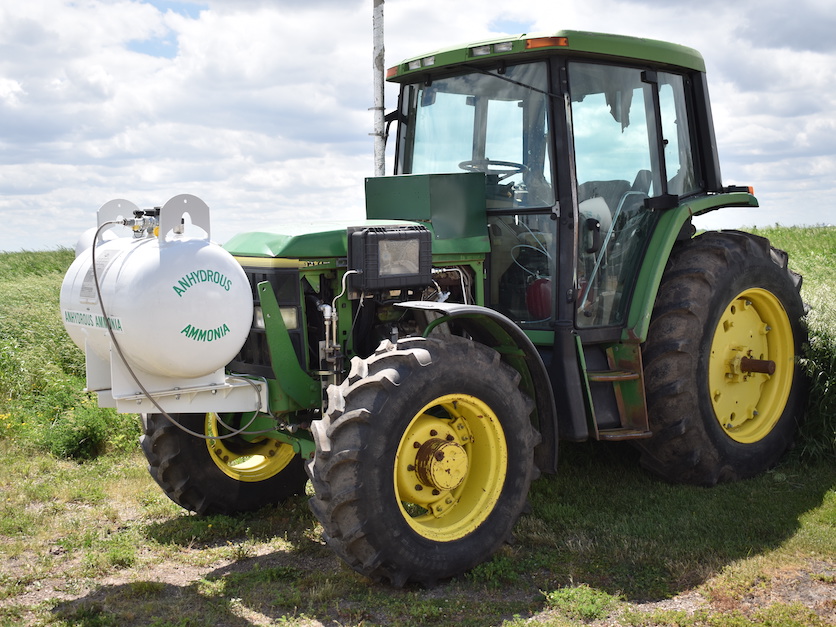 “You already have ammonia on the farm, you're already using it as a fertilizer,” Kane said. “So if you're strapping an ammonia tank onto a tractor in order to fertilize the field, why not also use that same ammonia to power the tractor in the first place?”

The retrofitted tractor has successfully graded a field and performed similarly to a normal tractor. It can also switch from partially using ammonia to using just diesel.

While Kane doesn’t expect to see major equipment companies introducing ammonia-powered tractors anytime soon, especially with such a limited market for green ammonia, he does think some farmers might modify their existing diesel tractors to run on a blend of hydrogen and ammonia.

“My opinion is that the demand for green ammonia utilization is nonexistent right now,” Kane said. “But green ammonia's coming, whether or not we build these tractors. So we're going to build a utilization and hopefully, it's a build-it-they-will-come type situation.”