The poultry industry is keeping a close eye on the future of litigation in Maryland that resulted last week in a court decision finding ammonia should be regulated as a water pollutant.

The ammonia emitted by livestock manure can travel miles from its source and end up in the Chesapeake Bay, which states in the region have committed to clean up through limits placed on nutrient pollution.

In her ruling, Montgomery County Circuit Judge Sharon Burrell said it’s clear that poultry houses “emit gaseous ammonia by discharging noxious fumes onto the waters of the state via industrial fans.” Based on the court record, she said “ammonia discharge is a specific, calculable event that the [Maryland Department of the Environment] is obligated to regulate in accordance with their responsibility to properly administer the [Clean Water Act].”

If implemented, the ruling likely would mean more monitoring and mitigation by poultry farms to address emissions from their operations. The ruling also could prompt the filing of other lawsuits seeking to force states to regulate airborne sources of pollution as water pollutants.

“The court found that MDE must regulate the millions of pounds of ammonia streaming from the poultry industry’s production areas and require those ammonia emissions be accounted for and controlled,” said Kathy Phillips, executive director of Assateague Coastal Trust, which brought the lawsuit.

Characterizing the decision, she said, “The department could no longer ignore the existence of a substantial quantity of ammonia pollution, the court said, because of the ‘definite and real impact on the Bay.’”

The Delmarva Chicken Association, however, is urging the state to appeal the decision and looking at how the industry might become involved in the lawsuit if it proceeds.

“Reopening this permit, which has been approved by the EPA and has gone through extensive public comment, adds uncertainty and potentially serious costs for each of Maryland’s family farmers raising chickens,” association spokesman James Fisher said.

He said the plaintiffs relied on a study that overestimated ammonia emissions from poultry operations by wrongly assuming their houses are filled all year and not taking into account the ammonia absorbed by forests on Maryland’s Eastern Shore.

Farmers also use litter amendments to control ammonia emissions, which can be harmful to the birds, Fisher said.

Beth McGee, director of science and agricultural policy at the Chesapeake Bay Foundation, which commissioned the study, said CBF was up-front about its limitations, but “even if we backed off and said chickens are only in the house 75% of the time, and half the farms are using amendments, it still would be a substantial amount of ammonia.”

McGee said about one-quarter to one-third of nitrogen loadings to the Bay are in the form of airborne deposition, and about half of that is ammonia.

The question now is whether MDE will modify its general discharge permit to cover ammonia emissions. In a prepared statement, spokesman Jay Apperson said MDE is reviewing the decision.

“Maryland’s CAFO permits are among the strongest in the country, and the Maryland program’s effectiveness has been noted by the U.S. Environmental Protection Agency in its reviews," he said. "Maryland is also committed to protecting and improving local water quality and restoring the Chesapeake Bay.”

Assateague Coastal Trust attorney David Reed, co-executive director of the Chesapeake Legal Alliance, said “the ruling was clear that they're going to need to go back to the drawing board on the permit and regulate ammonia emissions from the industry.” 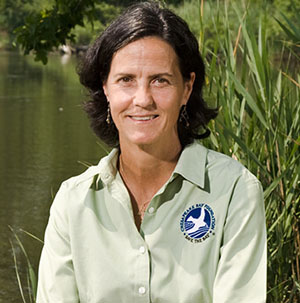 “We anticipate they'll simply mandate use of a few of the well-recognized, low-cost, and common-sense controls like multi-row plantings of grasses, hedges, and trees. These are practices that operators are already familiar with and some already utilize to be good neighbors,” he said.

As for the regional or national implications of the ruling, he said, “We think this could and should have national implications, but it depends in large part on the state water pollution laws. Maryland has a great opportunity now to set a good example of how to reduce massive quantities of nutrient pollution from this enormous source with simple and low-cost solutions.”

Six states and the District of Columbia are part of a bay-wide Total Maximum Daily Load requiring the jurisdictions to reduce their nutrient contributions to the nation’s largest estuary. Established in 2010, significant progress has been made, but addressing nonpoint source pollution from agriculture has been especially difficult.

CBF, Anne Arundel County, the Maryland Watermen’s Association and a pair of livestock farmers sued EPA last year over a lack of progress by New York and Pennsylvania in meeting 2025 nutrient reduction goals. The states of Maryland, Virginia and Delaware, as well as the District of Columbia, filed a similar lawsuit.

In finding ammonia should be considered a water pollutant, Burrell pointed to Maryland’s expansion of its water law to include “gaseous” forms of pollution. She rejected MDE’s argument that regulating gaseous ammonia as a water pollutant “will lead to the regulation of tenuous forms of water pollution originating from the air. The concrete and measurable nature of the pollution in this case does not justify the broad view of the CWA that the MDE warns of,” she said.