The state Senate has voted down a measure promising to protect California farmers by holding out-of-state products to the same environmental, food safety and labor standards.

Several lawmakers, doubting the state’s farmers could produce enough commodities to offset the decline in imports, sided with food retailers in opposing Assembly Bill 710. The unusual measure drew skepticism and support from both sides of the aisle and strong backing from environmental, labor and agricultural groups.

The bill overcame Republican opposition and passed the Assembly in 2021, before Garcia shelved it to negotiate amendments. The revamped bill returned two weeks ago with revisions clarifying that California would not impose fees on out-of-state producers, who would instead submit a form to CDFA self-attesting compliance for California’s codes.

The authors had already limited the scope of the bill to 10 fruits and vegetables commonly grown in California that face rising competition: apples, asparagus, bell peppers, blueberries, dates, honeydews, lemons, melons, nectarines, olives and table grapes. The bill would still allow retailers and distributors to import those products outside of the typical California growing seasons.

The amendments, however, did not win over the opposition and a hearing last week revived many of the same concerns aired in 2021. 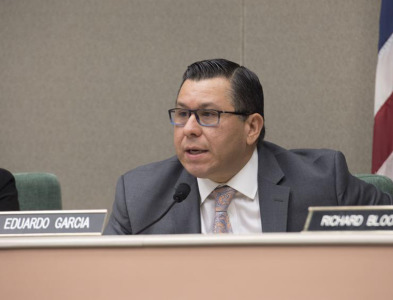 Sen. Josh Newman of Fullerton argued AB 710 “effectively will shut the border to imports of these products,” reasoning that countries like Mexico would not adopt California’s labor codes. Newman and Republican Sen. Melissa Melendez of Lake Elsinore prodded Garcia and the bill’s advocates on how California farmers would meet the added demand. Anthony Bianco, who runs a table grape operation in Garcia’s district, went to bat with the two lawmakers.

California farmers already produce year-round the commodities named in the bill and supply California as well as the U.S. and many international markets, argued Bianco.

“They can more than meet the demand,” he said, adding that the Coachella Valley produced 12 million boxes of grapes just a decade ago—though that number has since dropped to just 1.5 million and Mexico now produces 25 million. “We are abandoning them by getting rid of these products in California, because they're high labor, and other countries are taking over.”

Two million boxes would be enough for California, while Mexico could supply the rest of the U.S., he reasoned, while pleading with lawmakers that the difference in pricing would amount to just pennies per pound “to know that your fruits and vegetables were produced by a California farmworker who got a California living wage and that it had the highest standards.”

Bianco sparked a conversation about asparagus production, noting that the commodity has all but left California. According to the latest CDFA Agricultural Statistics Review, asparagus production declined by nearly a quarter in 2021 alone, to just 4,000 acres, following a 17% drop over the previous two years.

“Asparagus is already one crop on [the AB 710 list] that's pretty much gone,” he said. “It's been lost because of wages.”

The bill’s provisions would have allowed retailers to continue purchasing imported products like asparagus until California farmers were able to ramp up production to respond to the new market demand, ensuring Californians a steady supply.

“I represent the home of the asparagus. There's no more,” said Sen. Susan Eggman, a former Assembly Agriculture chair. “We are out of business.”

Eggman was skeptical the bill would revive asparagus production and criticized it for lacking an enforcement path, and she ultimately abstained from voting either for or against the measure.

“Asparagus growers said that they can produce these,” responded Garcia. “These commodities were selected by the industries coming forward, not by us pulling them out of a hat.”

Responding to concerns over enforcement, Glenn Farrel, a lobbyist for the advocacy group Growing Coachella Valley, said the regulatory process for implementing the legislation would flesh out those details.

“The bill intentionally punts a lot of the program development to CDFA,” said Farrel.

According to the Assembly Appropriations Committee, the bill would cost the state as much as $50 million to implement and another $15 million in ongoing funding, along with the need to procure new staff and office space. Farrel, however, argued the program would depend on third-party agents, as with CDFA’s programs for food safety inspections and foreign supplier verification. CDFA, for example, does not certify organic products, relying instead on California Certified Organic Farmers to maintain the quality checks.

Committee Chair Richard Roth of Riverside raised more concerns, worrying California growers could lose an entire crop to invasive pests or another disaster and consumers would not have that product on the store shelves as a result.

“You can never make that assurance, even today,” responded Bianco.

Melendez, who voted in favor of the bill while fellow Republican Sen. Patricia Bates of Laguna Niguel abstained, found it ironic that the bill aims to prevent practices that disadvantage growers.

“We have already done that, with the policies that California has put in place,” she said. “This is a problem of our own making.”