A New Mexico dairy farmer who lost nearly 4,000 of his cows due to PFAS contamination could get a payment soon from the Agriculture Department, while appropriators on Capitol Hill are seeking to fund additional research into PFAS contamination on farms and in communities.

A congressional staffer whose office has been in frequent communication with USDA said Art Schaap, who farms near Clovis, New Mexico, is “very close” to having his application for assistance from the Dairy Indemnity Payment Program approved.

Meanwhile, New Mexico lawmakers are considering legislation that would require the Defense Department to examine various options to compensate landowners whose property has been contaminated by the so-called “forever chemicals,” which have been used for decades in firefighting foam on military installations around the country. One of Schaap’s three dairy farms is located near Cannon Air Force Base. And Congress is emphasizing PFAS research in ag and environment spending bills.

The Defense Department released a report in September that said more than 2,100 agricultural operations in 37 states had been notified they were within a mile “down gradient” from high levels of PFAS contamination at military bases.

DoD, however, also said in the report, “Providing these agricultural notifications does not necessarily mean that PFAS is in the groundwater at the agricultural location or that cleanup is required.”

John Kern, a registered lobbyist representing Schaap, told Agri-Pulse it’s not clear how many ag operations nationwide have been affected by DoD contamination.

“A lot of these bases are not surrounded by a lot of agriculture,” he said, noting, however, that some dairy operations in Maine have experienced PFAS contamination of their cows after consuming feed containing the chemicals. The source in those cases is biosolids spread on cropland.

Kern said he and his partner in Washington have been working with the New Mexico delegation in Congress on the DoD-related legislation. “The idea has been proposed to us and we are looking into it,” said a spokesperson for one member of the delegation.

Starting in 2018, Schaap received monthly payments amounting to about $9.5 million for milk he could not sell, but the money dried up at the start of the Biden administration, which in December issued regulations authorizing compensation to dairy farmers for dead cows.

Schaap’s applications to USDA suggest the department will pay about $1,300 per cow, using a method that calculates value based on the dates of death over the past four years – not the fair market valuation of the animals in 2018. The result, Kern said, is that Schaap’s dairy was used by the USDA as a laboratory to test the feasibility of rehabilitating the animals at a cost of more than $8 million.

After all that, it appears he might get about $4.8 million for the approximately 3,600 cows he kept alive and that either eventually died or had to be euthanized.

“Had the current rule been in place when this started in 2018, he could have recouped enough to replace the entire herd and would have had the opportunity to start fresh,” Kern said. “He would have been much better off, as would the taxpayer footing the bill for this debacle.”

“I think this administration is going to fix it. I believe that Mr. Vilsack is going to take care of it,” Schaap, referring to Ag Secretary Tom Vilsack, said in an interview with Agri-Pulse.

But Schaap, as the first to seek compensation under the new regulations, said he feels like “a political football.” To replace the animals today, he said, would cost him $1,800 per cow.

USDA did not respond to requests for comment on Schaap’s situation, or whether other farmers have applied for relief.

PFAS has become a thorny political and scientific issue for the federal government. Vilsack took some heat from Sen. Susan Collins, R-Maine, at a congressional hearing last month, when the senator chided him for not responding promptly to inquiries she had made about assistance for Maine dairy farmers with contaminated cows.

“We are working with EPA to try to establish a national standard on what is an acceptable level or not of PFAS … so we can basically help to define the level of assistance and help that’s required,” he told Collins. “You are absolutely right — this is pervasive. It’s not just in Maine, but everywhere, because basically sludge was used to fertilizer farm fields for many, many, many years without an understanding and appreciation of the challenge.” 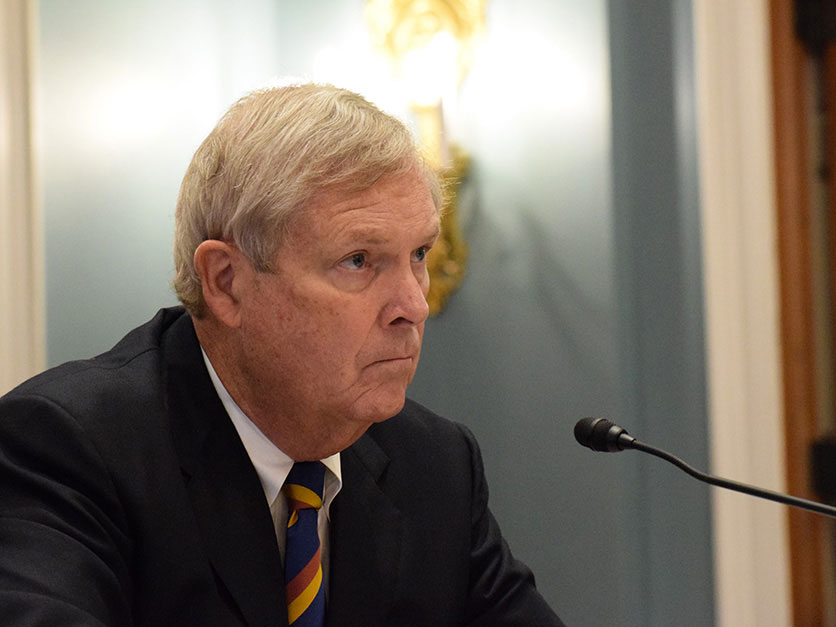 Congress is focusing on PFAS in spending bills for fiscal 2023, with $5 million included in the House Interior-Environment spending bill that funds the Environmental Protection Agency.

The report also would direct EPA to work with USDA “to better understand PFAS uptake into plants and animals to help reduce PFAS exposure in our food supply and promote farm viability. This research should include the investigation of PFAS uptake from residual treated soils and soil-to-groundwater modeling, as well as the investigation of PFAS-tolerant crops that can grow safely on contaminated land.”

The Agriculture Appropriations committee report also “encourages” the Farm Service Agency and Natural Resources Conservation Service “to explore using the Conservation Reserve Program to enroll PFAS-contaminated farmland that may not be suitable for further agricultural production.”

In addition, the committee said it “is aware that PFAS contamination can cause significant financial distress for farmers and encourages FSA to explore flexibilities for impacted borrowers to defer, restructure, or forgive their debt as appropriate,” and asks that FSA “work to avoid PFAS indemnity payments being diverted to repay FSA liens instead of helping to replace a farmer’s lost income.”

The committee also “encourages [USDA] to make better use of the authority provided by the 2018 Farm Bill to utilize its Water and Wastewater Loan and Grant Program to help address the needs of rural communities impacted by PFAS pollution.”