The election was held the same day Fortenberry was sentenced for lying to the FBI about illegal campaign contributions. U.S. District Judge Stanley Blumenfeld in California gave him two years of probation, a $25,000 fine and 320 hours of community service.

Flood, a former speaker of the Nebraska Legislature, will complete the remainder of Fortenberry’s term and is favored to win the general election in November, also against Pansing Brooks.

Flood is an attorney, broadcaster and founder of Flood Communications. His statewide network has 15 radio stations and five TV stations.

The top Republican on the House Agriculture Committee, Pennsylvania’s Glenn Thompson, believes the committee needs to take a closer look at margin coverage as an alternative to reference prices when updating Title I Farm Bill programs.

Speaking Tuesday at a farm bill roundtable in South Dakota with Rep. Dusty Johnson, R-S.D., Thompson said margin coverage has worked well for dairy programs and he believes it has potential for crops.

"I think one of the smartest things we've done since 2015 was in the dairy area where the risk management tool wasn't based on a reference price, it was based on the margin," Thompson said. "So in our discussions on Title I funding, we need to look at this.”

Keep in mind: Thompson is in line to become chairman of the committee if Republicans win control of the House in November.

For more on the farm bill, plus a look at the likely costs of rebuilding Ukraine’s agriculture, check out the weekly Agri-Pulse newsletter.

California Democrats John Garamendi and Jim Costa plan to introduce legislation today to give a boost to U.S. agricultural exports, which continue to struggle to get containers on ocean-going vessels. 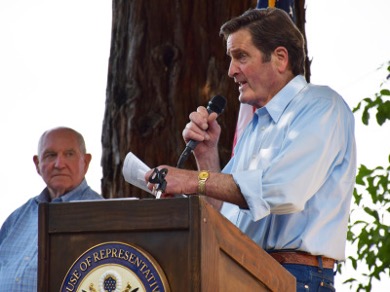 Rep. John Garamendi, D-Calif.
Ships arriving at U.S. ports would be given preferential treatment for delivering their cargoes if they agree to take on containers full of foreign-bound U.S. goods or pledge to make stops at more than one U.S. port, Garamendi tells Agri-Pulse. The bill is considered a companion measure to the Ocean Shipping Reform Act that was signed into law this month and seeks to ban carriers from unreasonably refusing to load containers full of dairy, meat, produce, rice or other commodities.

“This new preferential berthing will reward ocean carriers that serve both importers and American exporters by moving those vessels to the front of the queue for unloading and loading,” according to a description of the American Port Access Privileges Act.

“It will similarly incentivize ocean carriers to make second-leg voyages to ports like the Port of Oakland, which is critical for California’s agricultural exporters.”

U.S. International Trade Commission officials on Tuesday faced a barrage of exacting questions from U.S. Court of International Trade Judge Stephen Vaden on how they determined that unfair imports of phosphate fertilizer from Morocco’s OCP had injured U.S. producers. OCP is appealing the ITC ruling that resulted in countervailing duties and stopped hundreds of thousands of tons of yearly imports.

OCP officials found a less combative reception from Vaden, USDA’s general counsel for part of the Trump administration, who spent much of the hearing asking them to explain why they believed ITC erred in its decisions.

“The duties on phosphate fertilizer products imported from Morocco should be reconsidered,” U.S. lawmakers told the ITC in a March letter. “Imports currently supply about one-third of all domestic phosphate fertilizer, and Morocco has been a long-time supplier to U.S. farmers.”

OCP is leading a separate appeal at the U.S. Court of International Trade to challenge the Commerce Department’s calculation of the duty level.

The Bureau of Reclamation is asking for ideas on how it should operate the Colorado River’s two largest reservoirs after several agreements governing water operations on the river expire in 2026.

The two reservoirs, Lake Powell and Lake Mead, are currently at record lows due to a 23-year-long drought. These reservoirs, the agency warns, could reach “dead pool” in coming years, which means they could no longer release water downstream.

Keep in mind: The seven Colorado River Basin states and Mexico will likely begin negotiations over their future water allocations at that time.

A group representing tribal interests in farm bill discussions is pushing to allow tribal governments to exercise self-sovereignty in food and nutrition programs.

The Native Farm Bill coalition released a number of its goals for the 2023 farm bill ahead of a meeting between tribal leaders and officials from the White House, the Agriculture Department and the Department of Health and Human Services.

The coalition is advocating for Congress to expand a program that allows the USDA to enter into contracts with tribal governments when procuring food for assistance programs. They also would like to see the Buy Indian Act, which allows the Department of the Interior to set aside procurement contracts for Native American-owned and controlled businesses, apply to USDA.

Take note: The coalition has several other policy priorities, including changing dietary guidelines to include traditional Native American foods.

The “dead zone” in the Chesapeake Bay this summer is expected to be 13% smaller than the long-term average, partially due to below-average amounts of water flowing into it this past spring, according to a new forecast.

The forecast also cited decreased nutrient and sediment pollution from jurisdictions within the watershed. This year marks the eighth in the last 10 that the measured dead zone has been below the average, University of Michigan aquatic ecologist Don Scavia said.

Nutrients from farmland are considered the biggest remaining challenge in achieving the bay’s restoration.