Monday is Memorial Day, so Daybreak will return on Tuesday.

The competition for money from USDA’s effort to test climate-smart commodity projects is turning out to be quite stiff. Agriculture Secretary Tom Vilsack told the Senate Ag Committee on Thursday that USDA has received about 450 proposals from all 50 states for a total of $18 billion. That’s four times the estimate Vilsack gave at an earlier hearing. USDA says the previous estimate was very rough.

Keep in mind: USDA has $1 billion available for the program, and the application period for smaller-scale projects is still open. The deadline for that round, which will fund projects up to $5 million, is June 10.

A key focus of the Ag Committee’s hearing was the Biden administration’s decision to side with a plaintiff in a case involving Roundup herbicide. During the hearing, Vilsack said he was never consulted by the Justice Department before the brief was filed. And after the hearing, he told reporters that he didn’t know if EPA was consulted either.

He also emphasized that he wasn’t privy to the reasoning behind filing the brief. “That’s why I’m anxious to learn more about this,” he said.

Heavy rainfall has helped ease drought conditions a bit on the southern Plains, where a large portion of the nation’s wheat crop is at risk.

Why it matters:The four states accounted for half of the nation’s winter wheat production last year.

There also has been some improvement in the Pacific Northwest but little in California.

The nation’s food banks are having to purchase more of their food than ever before to meet demand at a time of extraordinary food inflation. That’s according to Vince Hall, chief government relations office for Feeding America, the network of food banks.

Food banks ordinarily rely heavily on donated products and commodities provided through USDA. But this year, some food banks are having to buy up to 40% of the food they distribute, Hall says in an Agri-Pulse Newsmakers interview.

“In the last month 65% of our food banks reported seeing increased demand,” Hall said. “So, this means consumers who are barely making it each month, they are having a really hard time.” 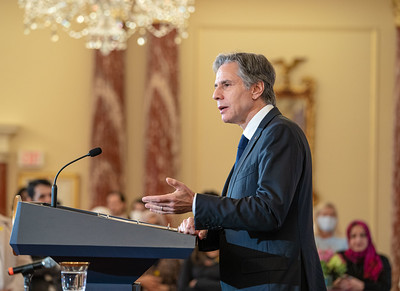 Secretary of State Antony Blinken had plenty of criticism for China during a Thursday speech at Georgetown University, but he also stressed the U.S. desire to work with the Chinese on the global food crisis.

The U.S. is looking to “China – a country that’s achieved great things in agriculture – to help with a global response,” Blinken said. “Last week at the United Nations, the United States convened a meeting of foreign ministers to strengthen global food security.  We extended an invitation to China to join. We’ll continue to do so.”

One of the leading congressional critics of Chinese investment in U.S. agriculture will be introducing a new proposal to prohibit individuals or businesses with ties to the Chinese government from buying American farmland.

The bill is a new version of a provision Rep. Dan Newhouse got added to a House appropriations bill to bar state-owned Chinese companies from purchasing land. The new bill would specifically prohibit land purchases by “nonresident aliens, foreign businesses, an agent, trustee, or fiduciary associated with the Government of the People’s Republic of China.”

Take note: USDA data indicates Chinese investors (who may or may not have ties to the Chinese government) only held around 194,000 acres in 2020, less than 1% of all foreign-owned agricultural land in the U.S. The accuracy of the data, however, is questioned in a new federal report.

“Happy Horse Bites” and “Snoop’s Chews CBD Dog Treats” are among the products being targeted by FDA in letters sent to three retailers of CBD products.

“CBD products for food-producing animals raise concerns regarding the safety of the human food derived from those animals,” FDA said in the warning letters.

Data is lacking on how “the formation of residues in edible products of food-producing animals in association with the consumption of CBD products by those animals and on safe levels of any potential residues for the human consumer.”

He said it. “It’s difficult for food banks to go from month to month trying to budget what they're going to need to serve the community when the prices continue to go up.” - Vince Hall of Feeding America, interviewed for Agri-Pulse Newsmakers.

Brought to you by Watkinson Miller & Dairy Management Inc.