The Legislature has approved a measure aimed at boosting United Farm Worker membership by overhauling the elections process. Yet Gov. Gavin Newsom preempted any victory celebrations by breaking the administration’s silence on Assembly Bill 2183 and announcing he will not sign the measure, even after it took sweeping amendments days ahead of an end-of-session deadline.

Labor advocates touted AB 2183 as a means for mail-in voting for union elections, offering the same option that is presented to all Californians during general elections. Critics, on the other hand, argued the bill would grant unions unfettered access to ballots.

“We cannot support an untested mail-in election process that lacks critical provisions to protect the integrity of the election,” said Erin Mellon, a spokesperson for the governor who issued a statement last week, adding that the bill assumed government cannot effectively enforce laws.

Debates over the UFW bill still erupted ahead of the final votes on the measure on Monday, though they were likely dampened following the announcement. Despite a coalition of agricultural organizations circulating an alert to lawmakers over the bill, Moderate Democrats mostly abstained from voting on it rather than against it. Senate Republicans were the only lawmakers to vocally question the measure, while several progressive Democrats in the Assembly pleaded for the state to better protect farmworkers from the abuse of employers. 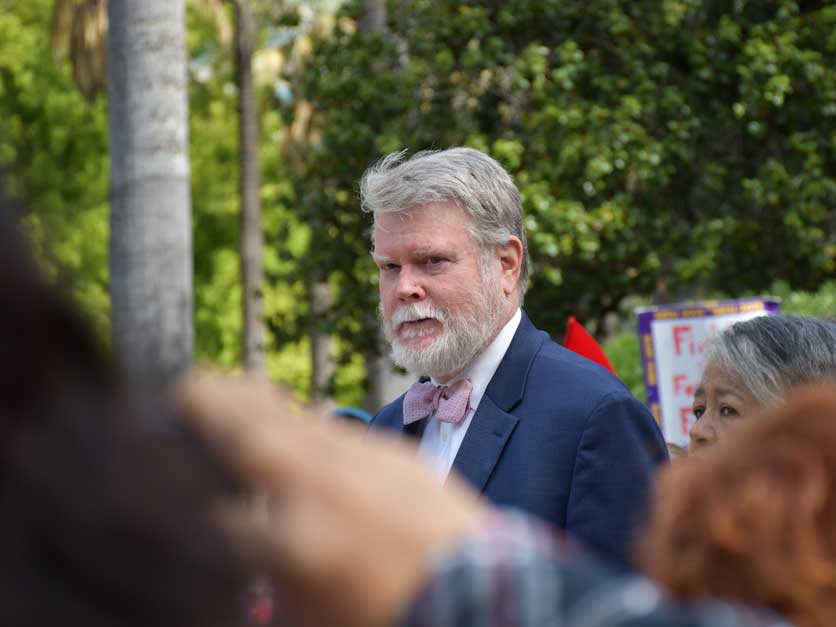 “This bill in this form gives farmworkers a chance to fix a system that has not worked for a very long time,” said Senator Maria Elena Durazo of Los Angeles, a former labor leader who grew up in a farmworker family and championed the measure in the Senate. “It's too convenient to ignore their reality when we sit down to eat the food they bring us. Their fears are rooted in the thousands of times farmworkers who spoke up got shipped out.”

Durazo and several other lawmakers saluted UFW’s 335-mile march from Delano to Sacramento that concluded at the Capitol on Friday after a month on the road. UFW rejoined the California Labor Federation this year, after pulling out of the alliance of unions in 2006 amid declining membership numbers for the farmworker organization. Former Assemblymember Lorena Gonzalez Fletcher took over the helm of the federation this summer and marched with UFW last week, showing how the state’s much larger unions have coalesced behind UFW. Unions representing teamsters, nurses, longshoremen and several other trades held UFW banners and donned red shirts in solidarity.

“If the governor refuses to sign our bill, we’ll be back and we’ll march harder,” pledged Gonzalez Fletcher, echoing sentiment from UFW President Teresa Romero.

During her years in office, Gonzalez Fletcher rankled agricultural interests through initiatives like AB 1066 in 2016, creating the nation’s first agricultural overtime law, and AB 5 in 2019, which reclassified independent contractors in a swath of industries as regular employees requiring standard benefits.

Last year Newsom vetoed AB 616 days before UFW was able to complete its march to the Capitol. Frustrated with the decision, the group instead rallied against the governor in his recall election by marching to the French Laundry, the location of Newsom’s social distancing controversy early in the pandemic that became a central criticism leveled by his Republican critics. The marchers pressed further, with demonstrations at Plumpjack Winery in Napa Valley, the flagship establishment for a suite of hospitality and wine businesses owned by Newsom but separated through a blind trust.

The marches and related media attention presented a means for UFW to raise revenues as well, as the group solicited donations to cover the expenses.

This year UFW planned to arrive in Sacramento before Newsom would have the opportunity to veto the bill. But the governor jumped to action first, releasing the announcement the evening before the rally.

Asm. Mark Stone of Monterey Bay, the bill’s author, had been negotiating with the governor’s office over his AB 2183 since January. Until the final days before a deadline for amendments, however, the bill remained nearly identical to AB 616. Durazo argued that it did satisfy the issues Newsom identified in his veto message but reflected agreement on just 90% of the details, which is why UFW asked Stone to sunset the remaining 10% that clashed with the governor’s priorities.

“We know that the governor doesn't completely agree with how we've implemented it,” acknowledged Stone during debate in the Assembly on Monday, as he reasoned that it still aligns with a framework the administration provided him a month earlier. “But if we don't implement it the way it’s been written, then the farmworkers are really not going to be able to take the vote the way that they feel they need to take that vote.”

Placating the governor’s concerns further, Stone added a clause to sunset the provisions after five years, a buffer allowing time to resolve any outstanding issues.

But the amendments raised even more red flags for the agriculture coalition. Matthew Allen, vice president of state government affairs at the Western Growers Association, told Agri-Pulse the revised bill was like “card check on steroids.”

New changes would allow for two alternatives to the standard in-person secret ballot elections. An employer could voluntarily choose mail-in voting or the union could petition the Agricultural Labor Relations Board with proof of majority support—the card check concept long lambasted by employers. The coalition argued the bill would coerce employers into waiving their rights to free speech by agreeing not share any opinions about unionization and that it sidesteps a recent U.S. Supreme Court decision limiting union access to properties—a pivotal ruling last year that handicapped California’s central law governing agricultural labor unions. They also described the mail-in option as also corrupt, since union agents could intimidate workers at their homes into signing pre-populated ballots.

Republican Sen. Shannon Grove of Bakersfield leveled the harshest criticism of AB 2183 on the Senate floor, arguing it would erode the tenants of democracy by taking away the secret ballot process that keeps votes private. 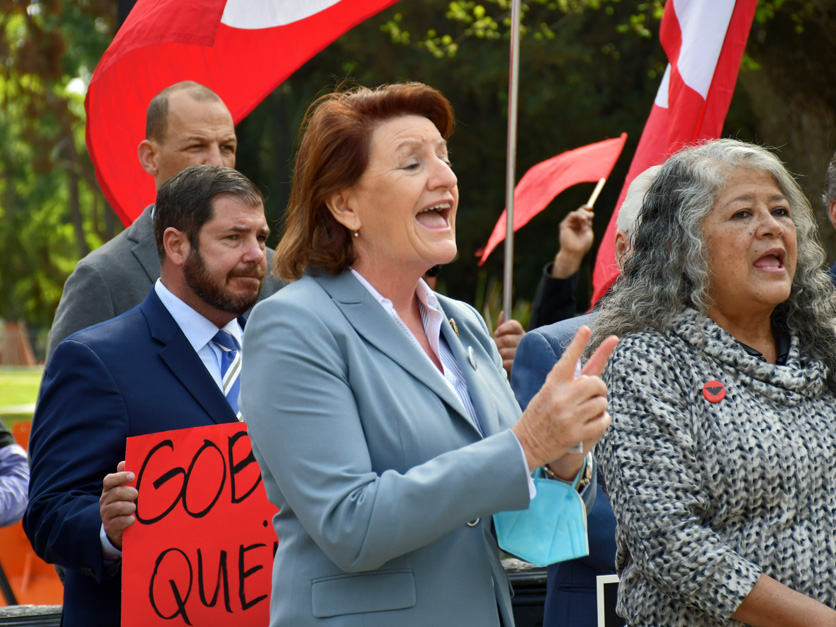 “The truth is that the UFW has not been successful in organizing farmworkers in the Central Valley for a variety of reasons, including that farmers and farmworkers work together in the interest of mutually having the benefit of that farm being successful,” she said, before praising agricultural giants The Wonderful Company and Grimmway Farms for “excellent wages and benefits” and investing in local schools. “This bill desperately tries to revive a union that has failed to unionize farmworkers in the Central Valley.”

Sen. Andreas Borgeas of Fresno added that it would be hypocritical for lawmakers to lead the national charge in putting forward various other measures to discourage voter suppression but allow for card check, “the antithesis of the democratic process.”

The Assembly carried a different tone on Monday, however, as no lawmakers stood to contest the measure. Several Democrats saluted UFW members in the audience, addressing them in Spanish at times, and described how farmworkers were still helping to put food on the tables of Californians while nonessential businesses shuttered during the pandemic and continued to do so as wildfire smoke swept across the state in 2020. Asm. Ash Kalra of San Jose feared that farmworker rights have been eroding in recent years.

“If you look at court cases, it's made it even more difficult [for unions] to communicate [with those farmworkers] that wish to empower them,” said Kalra. “We have an opportunity right now to help a group of workers that oftentimes are isolated under the control of the employers—who control the place where they work, how they're transported and where they're living.”

Asm. Sabrina Cervantes of Corona, who spoke at the rally last week, added that 97% of farmworkers are Latino while many are undocumented and that joining a union is “often the only chance they have to band together to make their voices heard and protect their rights.”

Asm. Steve Bennett of Ventura, who already stands at odds with agriculture over his proposal to limit groundwater pumping, argued that farmworkers cannot take care of themselves in the marketplace without union representation.

“I don't think there's any question—and the history of the United States shows us over and over again—that union membership is essential,” said Bennett. “This unique challenge that farmworkers have to get organized needs this extra legislation.”

After the Assembly cast the final votes on AB 2183, Senate Republicans wrote Newsom requesting a veto, describing the proposed process as “fraught with opportunities for trickery.” UFW, meanwhile, is holding a 24-hour vigil in Sacramento and three other cities urging Newsom’s signature.

While the governor’s press office indicated he would not sign the legislation, it referred to his proposed policy framework for the bill and offered that he would welcome an agreement with UFW on legislation to expand the opportunity for workers to be represented and potential changes to state laws that would make it easier for workers to organize.