Daybreak Sept. 9: Stabenow: Time may have run out on cattle bills

Lawmakers on both sides of Capitol Hill have spent the past couple of years working to rein in the market power of the four largest beef packers. But time may well have run out on two major reform bills.

Senate Agriculture Committee Chairwoman Debbie Stabenow, D-Mich., says in an Agri-Pulse Newsmakers interview that the Senate may not have enough floor time left to consider the measures, one of which would mandate minimum levels of cash trading in cattle markets.

“Those are bills that I would love to see move forward in some way. It’s not clear at this point how much … time it would take on the floor because there is a real division, particularly among Republican colleagues,” she said.

Senate Majority Leader Chuck Schumer, D-N.Y., has given no indication he will put the legislation on the Senate floor this month.

Keep in mind: The lead sponsor of the Cattle Markets Transparency Act, Deb Fischer, R-Neb., tells Agri-Pulse there would be enough GOP support for her bill to ensure its Senate passage, even if opponents can peel off several Democrats.

Stabenow also talks in her Newsmakers interview about the next farm bill. Newsmakers will be available today at Agri-Pulse.com.

Disaster aid may have to wait

There’s talk on the Hill of including a disaster aid package in the continuing resolution that must pass to avert a government shutdown when the new fiscal year starts Oct. 1.

Arkansas Sen. John Boozman, a member of the Appropriations Committee and the top Republican on the Ag Committee, doesn’t rule out including ag disaster assistance in the CR, but he thinks his GOP colleagues will insist on keeping the bill relatively clean. That means disaster aid will have to wait until lawmakers can agree on an omnibus funding bill, he tells Agri-Pulse.

“I think we've got a good chance of getting it done in the omnibus, for sure.” Boozman said. 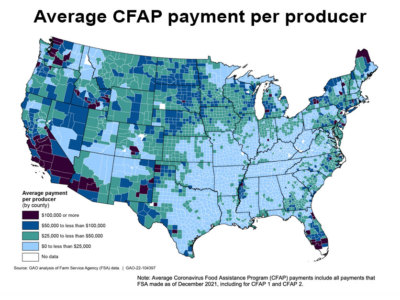 Seven farming entities collected at least $3 million in total Coronavirus Food Assistance payments, including two that got more than $6.5 million, according to data included in a report released by the Government Accountability Office. The top 25 CFAP recipients, nearly all of them general partnerships, collected a total of $74 million.

Daybreak Sept. 16: Hoeven: Disaster aid will have to wait
Daybreak Sept. 28: Conner, lawmakers have key roles at conference
Daybreak May 29: McConnell on stimulus: More CCC in, broadband likely out

The Food and Drug Administration will be collecting about 240 lettuce samples from operations in California’s Salinas Valley through October in a continuing effort to reduce outbreaks of foodborne illnesses.

The farms “were identified by traceback investigations in recent years as being potentially associated with a foodborne illness outbreak in which lettuce or leafy greens were the likely or suspect food vehicle,” FDA says.

FDA also says it may collect water, soil and scat samples “based on observations made at the time of sampling and a farm/ranch’s past inspection history.”

The Department of Homeland Security is making it clear that getting food assistance won’t prevent immigrants from being able to stay in the U.S.

A new rule reverses Trump-era regulations that allowed immigration officials to consider supplemental public health benefits such as Medicaid and nutritional assistance in deciding whether a noncitizen was likely to become a “public charge” –  meaning that they’re likely to depend primarily on the government for subsistence. The Biden administration hadn’t been enforcing the rule, which also allowed consideration of Medicaid and housing assistance, after a court vacated it in March 2021.

The recent monsoon flooding that has killed more than 1,000 people and forced others to flee their homes in much of the country is also taking a major toll on the country’s farmers. An analysis by USDA’s Foreign Agricultural Service estimates the country’s cotton production will fall to just 5 million bales, a 19% cut from earlier forecasts.

The FAS office in Islamabad raised its forecast for Pakistan’s cotton imports to 5.8 million bales. That’s about 21% more than a forecast made before the flooding and about 29% more than Pakistan imported last year.

He said it. “He's somebody that has been very, very popular, so it could be any time.” - Sen. John Boozman, R-Ark., on the prospects for a Senate vote on the nomination of USDA adviser Doug McKalip to be the Biden administration’s agricultural trade negotiator.