It looks like USDA is going to keep USDA’s county committee structure that insures farmers have a say in the administration of farm programs.

In an interview with Agri-Pulse Newsmakers, Vilsack said there does need to be an “appropriation representation” of the minority farmers in each county. “I think that's the critical concern. I don't think it's a situation of essentially doing away with the county structure. It's just making sure that it works fairly and justly,” he says.

This week’s Newsmakers will be available today at Agri-Pulse.com.

Bonnie: Climate-smart projects will learn from each other

USDA is looking to increase the impact of the climate-smart projects the department is funding by having project leaders share lessons with each other. USDA is setting up a “partner network” for that shared learning, some of which will be provided to the public, says Robert Bonnie, USDA’s undersecretary for farm production and conservation programs.

Speaking at a forum sponsored by Resources for the Future, Bonnie said the projects will be sharing lessons on a range of issues, including the measurement of carbon impacts and ways to reduce transaction costs. “There’s going to be structured learning that comes out of this,” Bonnie said.

By the way: Bonnie pushed back against a suggestion that farm subsidies should be reformed to push more farmers into lower carbon practices. Bonnie said farmers will need to benefit from addressing climate concerns and that means protecting their risk-management tools, including crop insurance.

“If climate policy is going to work … for the climate, it's going to have to work for agriculture and forestry,” Bonnie said.

Bonnie said crop insurance can be a “climate resilience tool,” noting the premium discounts USDA has offered the past two years to farmers who planted cover crops.

“Regulation does a does a good job of stopping bad things. It doesn't do a particularly good job of encouraging good things,” he said, referring to climate-smart farming practices.

The government’s Climate Prediction Center is out with its winter forecast, and it’s not good news for much of the West and South.

The forecast calls for “widespread extreme drought” to persist across the West and the central-to-southern Great Plains. Meanwhile, a drought is expected to develop across the South.

The cause: La Niña is expected to return for a third consecutive winter, producing warmer than average temperatures in the Southwest and across the Gulf Coast and eastern seaboard, according to the forecast.

By the way: Barge rates have fallen sharply along the Mississippi River even as low water levels have hindered traffic. USDA says in its weekly grain transportation report that the St. Louis barge spot rate fell from a peak of nearly $106 a ton last week to under $73 a ton this week. 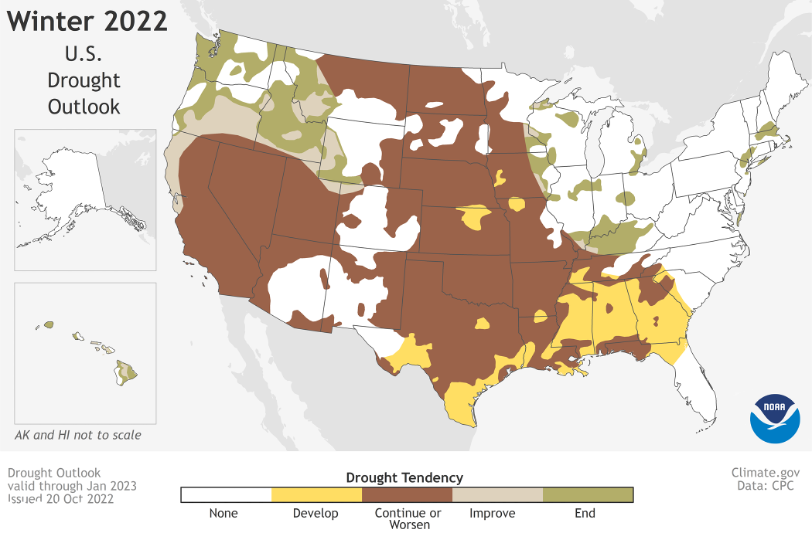 “Amid uncertainty about when barge traffic will normalize, some grain shippers have delayed deliveries until later in the year, which has softened demand for barges,” the report says. Restrictions on barges and periodic closures for dredging are expected to continue through the end of the month.

US soy sales to China ramp up in October

The second week of October was a big one for U.S. soybean sales and exports to Chinese buyers, according to the USDA’s Foreign Agricultural Service.

U.S. exporters reported sales of nearly 2 million metric tons to China for delivery in the 2022-23 marketing year. Chinese purchases accounted for nearly all of the 2.3 million tons sold in the week of Oct. 7-13.

It was also a big week for U.S. exports. The U.S. shipped 1.9 million tons of soybeans overseas, and 1.4 million of that went to China.

India last month took the controversial step of limiting its rice exports to protect domestic supplies, and FAS says the country’s concerns may be well-founded.

A Wisconsin commodity broker and his company, Prime Agricultural Investors, have agreed to pay $400,000 in penalties and about $463,000 in restitution for “fraud and willful deception” in handling customers’ accounts.

From January 2018 to September 2019, Chad Henderson “at times transferred profitable futures transactions from his customers’ commodity interest accounts to his own account,” according to an order issued Thursday by the Commodity Futures Trading Commission..

“At times, Henderson also transferred losing transactions from his account to customers’ accounts in order to avoid losses that he otherwise would have incurred.”

He said it. “We sort of threw a party here and didn't know how many people would show up.” Robert Bonnie, USDA’s undersecretary for farm production and conservation programs, on the surprising amount of requests the department received for grants to fund climate-smart partnership projects.