With TPP a distant memory, NCBA hopes to protect NAFTA

WASHINGTON, Feb. 8, 2017 - Actions taken by the White House have spelled the almost certain demise of the Trans-Pacific Partnership. Rather than licking their wounds from their loss, a major agricultural trade supporter is now being forced to jump into action to protect a long-standing deal.

Trade was the unmistakable hot topic at last week’s Cattle Industry Convention in Nashville. The industry, which has been jumping for joy at President Donald Trump’s plans for regulatory reform, must now cope with the fact that his trade policies and those of the industry are often in direct contradiction.

“We’re concerned that if we’re threatening to leave NAFTA altogether, then we’re going to leave some of the greatest market access the U.S. beef industry has ever seen,” Kent Bacus, director of international trade for the National Cattlemen’s Beef Association, told Agri-Pulse last week in Nashville. He pointed out that there’s a big difference – procedurally or otherwise – in withdrawing from NAFTA compared to declaring an intent to renegotiate the deal.

For the beef industry, pulling out from the agreement could be devastating. Having already lost the potential gains that TPP could have given the industry in Japan, it can ill-afford a loss at the negotiating table with Canada and Mexico. According to figures compiled by the U.S. Meat Export Federation, Japan has consistently been the top export market for U.S. beef, but Mexico has been a steady runner-up, with Canada comfortably in the top five. Both NAFTA countries have consistently imported about $1 billion of U.S. beef in each of the last five years, with Mexico being close to that figure for the last decade.

“We’re concerned that any disruption …, whether it be through putting NAFTA on hold, pausing it, renegotiating it, whatever the case, we could stand to jeopardize our duty-free, unfettered access to our neighbors,” Bacus said. Those duties, at least in Mexico, were as high as 25 percent before NAFTA took effect; tariffs for imported product in the U.S. are generally considered to be quite low. 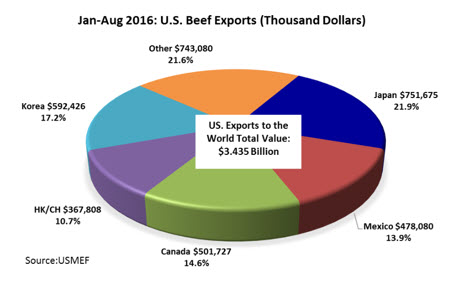 On the sidelines of convention discussions about the current state of the U.S. cattle market and industry production practices, beef producers from the three NAFTA countries had their own meeting in Nashville, a tri-lateral of sorts. The groups appear to have emerged from that conversation in lockstep, saying they hope to hold the beef industries of the three countries above the chaos that might entangle other industries in a NAFTA-uncertain world.

“As I was going into that meeting, the theme that was in my mind was that there’s opportunity to be found in the face of uncertainty,” John Masswohl, director of government and international relations for the Canadian Cattlemen’s Association, told Agri-Pulse. “As I listened to our NCBA counterparts and our Mexican counterparts, they were basically all saying the same thing.”

Interestingly enough, Bacus told Agri-Pulse something almost identical, saying “there’s a lot of uncertainty, but with uncertainty comes opportunity, and that’s what we’re going to look for.”

Trump last week said he wants to quicken the pace of renegotiation talks, and the other two countries have said they would be willing partners in reworking the 23-year-old NAFTA. Trump also noted Wilbur Ross – the nominee to run the Commerce Department – would head up negotiations. That role is typically reserved for the U.S. Trade Representative, a position Trump has given to Reagan administration trade veteran Robert Lighthizer.

Rumblings emanated from Nashville that NCBA is prepared to oppose a push to add mandatory country-of-origin labeling to the agenda in potential NAFTA talks. Bacus told Agri-Pulse NCBA was telling congressional and administration staffers that they want COOL to stay “in the grave where it belongs.”

COOL for beef was repealed in 2015 after a lengthy battle with Canada and Mexico that ended with the conclusion that “born, raised, and slaughtered” disclosure on meat labels and the segregation of live animals at processing facilities violated international trade obligations.

“We have to remind ourselves that COOL is no longer a concept,” Colin Woodall, NCBA’s vice president of government affairs, told NCBA members in Nashville. “COOL was law of the land for six-and-a-half years and it did not work.”

The World Trade Organization authorized retaliation against the U.S. for the policy, but COOL was repealed before sanctions could be levied. Mandatory COOL is still in place for lamb, goat, some fish and shellfish, and a variety of fruits, vegetables and nuts.

Masswohl said he hopes to see Canada still explore TPP ratification, although he acknowledged it would take some changes to the pact, with Trump pulling the U.S. from the deal.

On the agricultural front, Canadian negotiators – who he said have been “very positive” on the benefits of trade – might pursue talks about lumber access and harmonization of beef grading standards. And if the U.S. wants to talk dairy, he said Canada might want to talk sugar

I don’t fear renegotiating things,” he added. “I think it would be best if we were to continue on the path of TPP because quite frankly, TPP was the NAFTA renegotiation.”