At the close of 2016, the American wind fleet totaled 82,183 MW, enough to power 24 million average American homes. And with the addition of North Carolina’s first utility-scale wind farm announced earlier today, there are now more than 52,000 individual wind turbines in 41 states plus Guam and Puerto Rico, according to AWEA’s Fourth Quarter 2016 U.S. Wind Industry Market Report

The report was released at General Motor’s Arlington, Texas Assembly Plant, which will soon be 100 percent wind-powered.

“American wind power is now the #1 source of renewable capacity, thanks to more than 100,000 wind workers across all 50 states,” said Tom Kiernan, AWEA CEO. “Growing this made-in-the-USA clean energy resource helps rural communities pay for new roads, bridges, and schools, while bringing back manufacturing jobs to the Rust Belt.

“With our two-thirds cost reduction over the last seven years, household brands like General Motors, Walmart, and more are buying low-cost wind energy to cut costs and power their businesses. American wind power is on track to double our output over the next five years, and supply 10 percent of U.S. electricity by 2020.”

“With more wind energy production and more wind workers than any other state, if you want to know how wind works for America, just ask a Texan,” added Kiernan.

Wind is a new drought-resistant cash crop for farmers and ranchers who host wind turbines on their land, according to AWEA. “Nationwide, wind projects provide private landowners with more than $245 million in land lease payments annually. Texas landowners receive more than $60 million of that, in many cases helping to keep farms and ranches in their families.”

Wind energy is now the country’s fourth-largest source of electric capacity, behind natural gas, coal and nuclear energy but ahead of hydroelectric and solar. It generates about 5.5 percent of America’s electricity, enough to power 24 million homes, and about five times more than solar.

Locally that amount can be much higher. For example, both Iowa and Kansas produce over 30 percent of their electricity using wind, while Oklahoma and North and South Dakota all generate over 20 percent, according to AWEA. Overall, 13 states create at least 10 percent of their electricity using wind. That includes Texas, an especially impressive feat considering the Lone Star State produces more electricity than the United Kingdom. (See map below.) 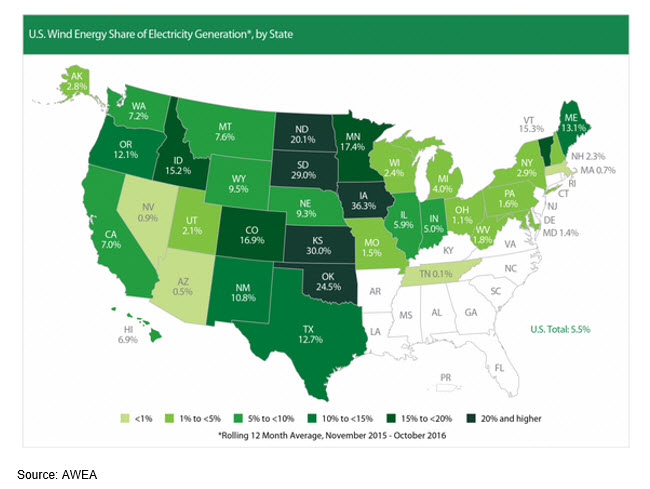