“As U.S. producers have become more efficient and world sugar prices have risen, Brazil is now the top recipient of our domestic product,” said Renewable Fuels Association President and CEO Bob Dinneen. “U.S.-produced ethanol continues to be the lowest-cost, cleanest octane source on the planet. Our industry produced 15.2 billion gallons of ethanol last year, and while we continue to meet our domestic needs, ethanol exports are essential for future growth.” 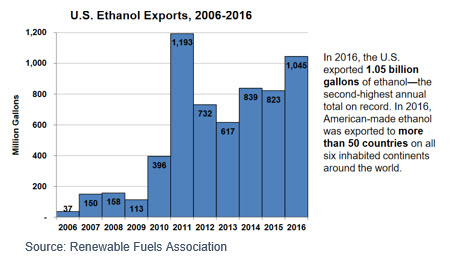 Net exports of ethanol from the United States set a record of 1.01 billion gallons in 2016, according to a new eight-page summary of 2016 ethanol trade data published recently by RFA.

Brazil to suspend tariff on ethanol imports
US wine imports, exports on the upswing
Russian grain boom pushes exports into US sales territory

Meanwhile, ethanol imports registered at just 34 million gallons, the lowest total since 2010. Brazil was the leading destination for U.S. ethanol exports, followed by Canada and China. Together, the three countries accounted for 68 percent of total ethanol exports.

“Consumers in dozens of countries around the world are now reaping the benefits of U.S. ethanol: better engine performance, reduced emissions and lower cost. RFA will continue to work with its partners to build on the successes of 2016 and further develop the global market for ethanol,” Dinneen added.