The Rockefeller Foundation’s mission—unchanged since 1913—is to promote the well-being of humanity throughout the world. Global food security, one of the Foundation’s major focuses, will be front and center when Dr. Raj Shah joins the Rockefeller Foundation (RF) as its new President effective March 1, 2017. Dr. Shah is the former Administrator of the US Agency for International Development (AID). He will no doubt continue to build upon the Foundation’s leadership in agriculture and food security. 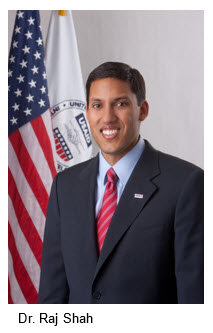 While at AID, Dr. Shah earned a reputation for elevating international development assistance, with an emphasis on agriculture, while working with counterpart governments from all over the world and with bipartisan leaders in the US Congress. Dr. Shah, a medical doctor, created the National Institute for Food and Agriculture and served as Chief Scientist at the US Department of Agriculture under the Obama administration before moving to AID.

As head of AID, Dr. Shah led the response to some of the greatest humanitarian crises or our time, including the devastating earthquake in Haiti and the Ebola outbreak in West Africa. He was also the point person for the Administration in codifying Feed the Future (the Global Food Security Act) by generating bipartisan support. Previously, Shah served in a number of leadership roles at the Bill & Melinda Gates Foundation.

The Rockefeller Foundation has a long and storied history on agriculture and food security, funding the research by Dr. Norman Borlaug and driving the Green Revolution. In 1970, Dr. Borlaug won the Nobel Peace Prize for his effort to feed the world…the only person to ever win the Nobel Peace Prize for contributions to agriculture. It therefore comes as no surprise that the Rockefeller Foundation selected someone with as much expertise on food security and agriculture as Dr. Shah.

Agriculture was one of the first concerns of the Rockefeller Foundation. The RF’s original General Education Board quickly realized that better farming practices were the key to better schools and human development. The RF’s strategy was to increase crop yields, thereby raising farm incomes and building a stronger tax base to help fund public education. Fast forward to the 1950s, the technologies and hybrid plants developed in the RF’s Mexican Agriculture Program spread internationally. Within a decade, the increases in crop yields made possible by RF-sponsored research led to the Green Revolution.

By the 1980s, RF-initiated programs in food production and distribution had become largely self-sufficient. Meanwhile, researchers in molecular biology were on the verge of breakthroughs in genomic mapping, and the RF sought to capitalize on technologies that might help solve more intricate problems of nutritional content.

For example, launched in 1984, The International Program in Rice Biotechnology (IPRB) reinvigorated RF’s support of biological research. According to RF “The IPRB can claim many accomplishments. Over 700 scientists from approximately 30 countries participated in the program by the time it concluded in 2000. The identification of genes that provided immunity from blight enabled the engineering of blight-resistant rice. “Golden rice,” a genetically modified hybrid that introduces Vitamin A into the calorie-filled but otherwise nutrient-lacking grain offers better nutrition to millions.”

The Foundation is now focused on building greater resilience and more exclusive economies. Sixty-five percent of the world’s uncultivated land is in Africa, which also means we can’t get to global food security without African food security. An estimated 60%-70% of Africans rely on agriculture for their life and livelihoods. The yields in Africa, however, are only 10% of the yields in the United States.

The potential for economic growth—as well as home-grown food security—is enormous. It is not a coincidence that in 2006, while at Gates, Shah played a key role in establishing the Alliance for a Green Revolution in Africa (AGRA) in coordination with Dr. Judith Rodin at the Rockefeller Foundation. 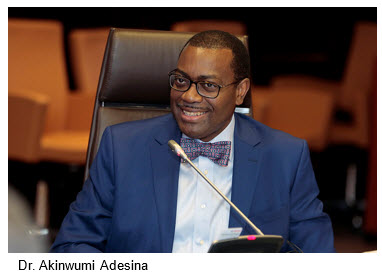 In short, agriculture is the key to Africa’s development, as it is in most developing countries. No one understands this better than Nigeria’s former Minister of Agriculture, the former Vice President for Policy at AGRA and the current President of the African Development Bank, Dr. Akinwumi Adesina. Dr. Adesina is an aggie through and through. Having received his PhD in Agricultural Economics at Purdue University, Dr. Adesina has dedicated his life to global agricultural development. Under his leadership, the African Development Bank has launched its “Feed Africa Strategy”. The African Development Bank plans to invest $24 billion over the next ten years, in support of African countries and the private sector, to unlock the potential of African agriculture.

Both Shah and Adesina are strong supporters of sound science, including the use of biotechnology to boost production, fight hunger, and stimulate economic growth. In fact, while at AID, Shah published the “Agricultural Biotechnology for Development” in multiple languages.

At 43, Shah will be the youngest and first Indian-American, to serve as president of the Foundation. In announcing the unanimous decision by the Board of Trustees to select Shah for this most prestigious position, Dick Parsons, the Board Chair, noted the dynamism and experience Shah will bring to this great philanthropic institution. Given Shah’s history at the Bill & Melinda Gates Foundation and his reputation around the world, Shah can be expected to have a profound impact on the drive toward global food security.

And the timing is critical. Not only is the world’s population exploding toward 9 billion people, but as a result of conflict and drought, the demand of emergency food aid is at an all-time high. The World Food Program simply cannot meet the demand. There are more refugees in the world today than at any point since WW II. Four countries in particular are in grave danger of famine: South Sudan, Yemen, Nigeria and Somalia.

Former Secretary Vilsack executed a Memorandum of Understanding (MOU) with AGRA to assist Africa with research and extension services. The next farm bill will provide an opportunity to build on the MOU and on the Global Food Security Act. Food security remains a challenge that the Trump Administration will have to grapple with, but it also presents an opportunity for the Administration to provide leadership on an issue with a broad bipartisan constituency that would help the United States and the world community too.

A few years ago, President Obama introduced Shah by marveling at all he had accomplished in his 30’s and wondered what he would do in his 40’s. Now we know.

Marshall Matz specializes in agriculture at OFW Law in Washington, D.C. Matz has long been identified with nutrition and global food security; he was the founding Chairman of the Board of the World Food Program, USA. mmatz@ofwlaw.com