WASHINGTON, Feb. 22, 2017 - The new administrator of the Environmental Protection Agency quoted the legendary naturalist John Muir in an introductory speech to a few dozen EPA employees and the media Tuesday, saying he wants his agency to help establish places to both pray in and play in. 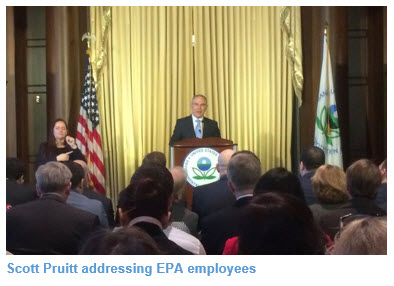 Scott Pruitt, former attorney general of Oklahoma, was confirmed last week by the Senate over the objections of Democrats who said his views are too closely aligned with those of the fossil fuel industry. They argued that Pruitt’s confirmation vote should have been postponed until after emails sought under Oklahoma’s Open Records Act were released.

But Majority Leader Mitch McConnell didn’t budge, and the Senate voted 52-46 to approve Pruitt for the top job at EPA. Two Democrats, Joe Manchin of West Virginia and Heidi Heitkamp of North Dakota, voted for him, and one Republican, Susan Collins of Maine, voted against him.

In his 11-minute talk, which was livestreamed on EPA’s website, Pruitt outlined general principles but offered few specifics on issues he will face in the coming weeks, months and years. Two significant  items on his plate are the Clean Power Plan (CPP), a massive rulemaking under which states devise plans to reduce carbon emissions from power plants, and the Waters of the U.S.(WOTUS) rule, which seeks to clarify which of the country’s waters can be regulated under the Clean Water Act.

Both rules have been stayed by the courts. The full D.C. Circuit Court of Appeals is expected to issue a ruling soon on the legality of the CPP, while the Supreme Court has taken on a case that concerns where the legal challenge to the WOTUS rule should be filed – in federal district courts or the federal circuit courts of appeals. Meanwhile, President Trump is reportedly close to issuing executive orders addressing CPP and WOTUS.

Pruitt essentially reiterated what he said at his confirmation hearing before the Senate Environment and Public Works Committee. He said that EPA needs to adhere to the rule of law in the rulemaking process in order to avoid the prospect of litigation, something he is familiar with, having sued the agency more than a dozen times as Oklahoma AG.

“Process matters,” he said. “Regulations ought to make things regular. Regulators exist to give certainty to those that they regulate.”

Following the proper process for writing regulations “sends a message that we take seriously our role of taking comment and offering response and then making informed decisions on how it’s going to impact those in the marketplace,” he said.

E15 waiver in hand, industry now shifts to permanent fix
Ag groups ponder on Pruitt: Should he stay or should he go?

He also said the agency should avoid “abuses that occur sometimes,” such as using guidance to substitute for actual rules or “engaging in regulation through litigation.” Pruitt has been a critic of what is known as “sue and settle,” shorthand for crafting court-approved settlements with environmental groups that do not address industry concerns and, he said, “actually bypass” federal law governing administrative procedures.

“We need to be open and transparent and objective in how we do rulemaking and make sure we follow the letter of the law as we do so,” he said. That way, the regulated community “will know what’s expected of them and they can act accordingly.”

The rules the agency writes need to be “tethered to the statute,” he said. “The only authority that any agency has in the executive branch is the authority given to it by Congress,” he said, noting that “sometimes those authorities are broadly stated, giving much discretion to an agency,” while other times “Congress has been very restrictive . . . very specific about what we can and cannot do as an agency.”

“We need to respect that,” he said. “When we do that, guess what happens? We avoid the uncertainty of litigation and we reach better ends and outcomes at the end of the day.”

Pruitt also spoke about the important role the states play in environmental protection. “Federalism matters,” he said. “I seek to ensure that we engender the trust of those at the state level” so that the states are partners with EPA.

“I believe that we as an agency and we as a nation can be both pro-energy and jobs and pro-environment, that we don’t have to choose between the two,” he said.

After the speech, EPA senior White House adviser Don Benton praised Pruitt to a small group of reporters and said Pruitt has been involved in helping craft the executive orders expected to be issued by the White House. Benton, a former state senator from Washington, did not say when those orders might be issued or offer any clues as to when Pruitt might name a deputy administrator or assistant administrators to oversee the various offices within EPA.