Home » Ag groups ponder on Pruitt: Should he stay or should he go?
Environment News Politics Energy

Ag groups ponder on Pruitt: Should he stay or should he go?

There’s been no shortage of controversy surrounding Scott Pruitt in the last month, but a number of the nation’s ag groups aren’t interested in replacing the embattled EPA administrator

Last week, EPA Administrator Pruitt defended his record amid negative media coverage of his travel, security, and living expenses before two House subcommittees and faces an ongoing investigation by his agency's inspector general. Yet, for many agricultural interests, Pruitt’s successes on regulatory rollback and efforts toward agency streamlining overshadow ethical controversies on the administrator’s lodging and spending decisions during his time at the head of the agency. What’s more, many don’t anticipate Pruitt’s job is in jeopardy - at least for now.

“I don’t expect to see any change in the EPA administrator,” Michael Formica with the National Pork Producers Council tells Agri-Pulse. “It’s not anything I’ve been planning for.”

Pruitt has taken his lumps from a number of directions, but perhaps no Republican lawmaker has voiced more disapproval than Iowa Sen. Chuck Grassley, R-Iowa. The biofuel stalwart has frequently asked Pruitt to change his approach on ethanol policy, especially in light of news that the EPA was granting small refiner exemptions to facilities claiming they’d face economic hardship if forced to comply with the Renewable Fuel Standard.

But Grassley says on almost every other subject, Pruitt still has his support.

“Even though I think he’s screwing the family farmer and helping very rich refineries, I still think almost everything else he’s done as EPA director is the right thing to do,” Grassley said. He also pointed out the Senate likely doesn’t have time to handle confirmation of a new EPA administrator “with the Democrats filibustering everything.” 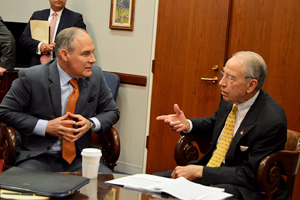 “I wish Pruitt would know that I support most everything he’s doing,” Grassley added. “Why doesn’t he get right with ethanol?”

But some agricultural leaders are also increasingly nervous that Pruitt will also miss the mark when his team rewrites the controversial Waters of the U.S. (WOTUS) rule.

"There are a lot of people in EPA giving Pruitt good counsel on this subject," said a source who asked not to be identified in order to speak frankly about decision-making at the embattled agency. "In order for a new WOTUS rule to be a legacy for the Trump Administration and have staying power, it has to be done right. Pruitt tends to err on the side of fast rather than right."

Setting aside the politics and personalities that often inflame the debate about whether Pruitt should be dismissed, some question whether removing him would change the agency’s approach on WOTUS. Regulatory reform, one of Pruitt’s chief accomplishments as administrator, has also been a hallmark of the Trump administration as a whole.

“If an EPA administrator were to change midstream here, I think it’s going to slow the whole thing down,” Scott Yager, environmental counsel for the National Cattlemen’s Beef Association, said about WOTUS reform. “We wouldn’t want that to happen. There is a process to make the machine still roll ahead … You’re going to have someone acting in that position who is getting up to speed on all of these issues and that’s never a good thing.”

In the event Pruitt were to be shown the door, the likely acting administrator would be Andrew Wheeler, the former coal lobbyist, Hill staffer, and EPA employee. Confirmed April 12 as deputy administrator by a 53-45 Senate vote, Wheeler is, by all accounts, a well-known presence in Washington with a respectful approach and solid understanding of the issues.

Chris Bliley, vice president of regulatory affairs for Growth Energy, said he’s crossed paths with Wheeler at various points in their respective careers. Growth Energy has been vocally critical of a number of EPA’s decisions under Pruitt’s leadership, but Bliley said Wheeler “understands the politics and the policies of these issues” and is “a welcome addition at EPA.” 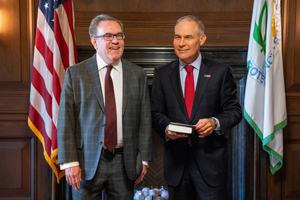 It’s just that understanding and experience that might worry environmental groups critical of the Trump administration’s EPA. After Wheeler was confirmed last month, Jeff Turrentine wrote for the Natural Resources Defense Council that Wheeler’s lack of ethical concerns doesn’t improve the group’s opinion of him.

"He has more friends than enemies in Washington and seems unlikely to shoot himself in the foot or otherwise self-destruct,” Turrentine wrote. “In the end, that might actually make Wheeler even more dangerous than Pruitt – not less.”

While what once seemed like a downpour of reports of Pruitt’s ethical concerns may have slowed to a more measured drip, some ag groups remain hopeful that Pruitt’s job is safe and confident that their policy priorities are protected no matter what happens.

“Obviously, we want Administrator Pruitt to keep doing the job; he’s our guy,” Yager said. “But if the unfortunate circumstance were to come about where Pruitt were to have to leave or fall away, then you have someone in Andy Wheeler that could step up and keep the train running.”