Is Trump willing to ‘deal’ on proposed energy cuts?

WASHINGTON, Mar. 22, 2017 - President Donald Trump explained in his 1987 book The Art of the Deal that “my style of deal-making is quite simple and straightforward. I aim very high, and then I just keep pushing and pushing and pushing to get what I’m after. Sometimes I settle for less than I sought, but in most cases I still end up with what I want.”

So Trump’s 62-page budget blueprint released last week likely aims “very high” by asking for far more budget cutting and program eliminations than the president expects to achieve. If that’s true, in writing the 2018 federal budget Congress just needs to figure out over the next six months what Trump really wants. Perhaps he really does want to eliminate energy and climate research programs at the Department of Energy, the State Department, NOAA and EPA that some would argue reap high returns for American taxpayers and the economy. If so, it will be a heavy lift since these programs typically enjoy broad bipartisan support in Congress and across the country.

As one example, DOE’s 1970’s research on using fracking to access otherwise unrecoverable natural gas continues to pay huge dividends to the U.S. economy and the petroleum industry. Another example is the EPA/DOE Energy Star program that Trump proposes to eliminate. Energy Star ratings of energy consumption give consumers otherwise unavailable energy-use information at a cost of about $50 million per year to generate an estimated annual savings of over $34 billion in consumers’ reduced energy costs. 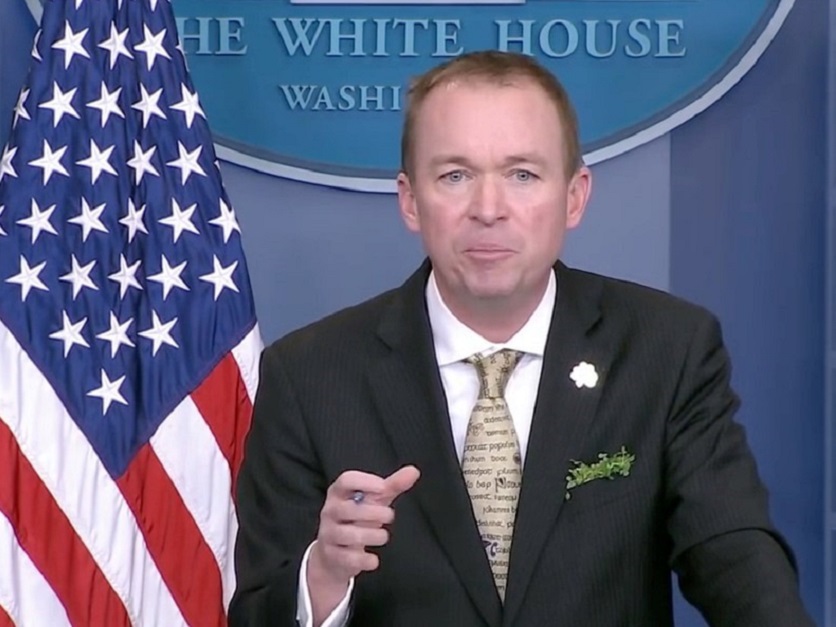 Apparently, such windfall returns were not part of the calculations when Trump’s Office of Management and Budget Director Mick Mulvaney filled in the figures in the president’s spending plan. When he introduced the budget at the White House last Thursday morning, Mulvaney explained that instead of applying rigorous cost/benefit analysis, it was simply Trump’s campaign promises that “generated this budget.”

Questioned about widespread cuts to federal scientific research – including the elimination of DOE’s ARPA-E research program to save $297 million next year – Mulvaney said the program cuts and terminations are based on “the President's business-person view of government.” He said these budget choices are a response to government agencies’ “mission creep” and acting “outside their core functions.”

As a prime example of targeting “mission creep” and focusing on “core function,” Mulvaney said the budget’s $10.9 billion, 29 percent cut in State Department spending is because “much of the money that goes to climate research, green energy, those types of things, are actually in the State Department budget.”

Mulvaney didn’t mention that zeroing out DOE’s ARPA-E program will end lots of biofuels and renewable energy research aimed at reducing climate change impacts. But in the case of climate research at DOE, EPA, State, and NOAA, Mulvaney did say, “I think the president was fairly straightforward. We’re not spending money on that anymore. We consider that to be a waste of your money to go out and do that. So that is a specific tie to his campaign.”

Energy Secretary Rick Perry’s series of tweets about the Trump budget shows how the administration hopes to shift energy policy and programs away from what it considers “a waste of your money.” Perry praised ARPA-E achievements, saying that “innovators like the ones supported by our ARPA-E program are key to advancing America’s energy economy.” But in praising the Trump budget that zeroes out ARPA-E, Perry tweeted that “#AmericasBudget blueprint reflects more reliance on private sector to fund R&D and commercialization of energy tech.”

Perry says he looks forward to working with Congress to ensure DOE can accomplish the “mission driven” goals expressed in Trump’s blueprint budget. The plan focuses on “positioning our nation to become more energy independent by utilizing America’s greatest natural resource, our people,” Perry said in a statement. “The department’s mission over the last 40 years will look very different for the next 40 years as we continue to innovate. At the same time, we will keep our commitments to further the clean-up legacy projects, utilize our national laboratories for cutting edge science and improve our national security.”

Spotlighting the administration’s determination to cut federal spending for “climate research, green energy, those types of things,” Mulvaney explained what comes next. He said that after accomplishing “Obamacare repeal-and-replace first, then tax reform second,” the White House’s next objective will be infrastructure, “which may come after the August recess in Congress.”

The Climate Reality Project founded by former Vice President Al Gore warns specifically about what implementing Trump’s budget would mean. “Carbon pollution levels rise and we’re way behind every other global power in cutting emissions and making good on our Paris Agreement commitments.”

On a global scale, Gore’s climate-action group warns against the budget proposals to cut support for the United Nations’ Green Climate Fund, end U.S. climate-related foreign aid programs, and slash climate research and development programs: “Abroad, with less support from the U.S., developing nations turn to fossil fuels even as summer temperatures skyrocket, infectious diseases spread, and farmers face increasingly uncertain futures. Worldwide, the threat of food and water shortages grow and the conditions that contributed to the deadly war in Syria and refugee crisis in Europe make the headlines more and more often.”

Heather Coleman, climate change policy manager at Oxfam America, says the Trump budget, overall, represents “climate denialism in action.” She adds that many of the energy and climate initiatives that the budget would eliminate “were created with bipartisan support under the George W. Bush administration” and “are known and seen to deliver real impacts on the ground.”

But it’s not just environmental groups concerned about the Trump budget.

Rep. Hal Rogers, R-Ky., commented that “while we have a responsibility to reduce our federal deficit, I am disappointed that many of the reductions and eliminations proposed in the President’s skinny budget are draconian, careless and counterproductive.”

Promising continued support for programs that the budget would cut, including the Appalachian Regional Commission and the Economic Development Administration, Rogers said such programs have proven themselves because “today, nearly everyone in the region has access to clean water and sewer, the workforce is diversifying, educational opportunities are improving, and rural technology is finally advancing to 21st century standards.”

Rogers concluded that because it’s Congress that will decide the final budget allocations, “As the full budget picture emerges in the coming weeks, I am optimistic that we can work with the administration to responsibly fund the federal government, including those agencies which serve as vital economic lifelines in rural parts of the country that are still working to overcome substantial challenges.”

Sen. Chris Van Hollen of Maryland, the Democratic Senatorial Campaign Committee chairman, called the Trump budget “a wake-up call to a lot of people who supported Donald Trump that his budget is betraying them.” Warning that “rural areas get badly hurt in this budget,” Van Hollen said it’s unclear whether the Trump administration was “totally out of touch” in writing the budget or else not making “a real effort.”

Charging that the Trump budget demonstrates “a general lack of understanding of what really takes place in rural America,” House Agriculture Committee Ranking Member Collin Peterson, D-Minn., said, “The good news is this budget will be ignored, as it should be.”