WASHINGTON, Mar. 24, 2017 - Sonny Perdue did everything he had to do at his Senate confirmation hearing. President Trump’s nominee for agriculture secretary pledged repeatedly to be a “tenacious” advocate for agriculture. He assured members of the Agriculture Committee that he would be in the middle of the administration’s trade negotiations.

The former Georgia governor also took on some thorny regional issues by pledging to address appeals from dairy and cotton producers to provide them some additional assistance ahead of the next farm bill.

Perdue stopped short of saying that he would support the cotton industry’s appeal to make cottonseed eligible for the Price Loss Coverage program. And he cautioned that any aid for dairy and cotton would have to fit within the budget. But Perdue made clear that he thought it was important to do something for both commodities ahead of the next farm bill.

Perdue reassures Democrats. Perdue sought to display some independence from the White House by saying that he had nothing to do with Trump’s proposed cuts to USDA and had reservations about them. He also said he supported easing financial restrictions on trade with Cuba.

Perdue used several exchanges with senators to express his support for USDA rural development programs, which Trump has targeted for cuts. Perdue said that rural America is “better because of the presence of USDA.”

Perdue also indicated he would pick up where former Agriculture Secretary Tom Vilsack left off in using the department to battle the opioid crisis in rural America. Perdue disclosed that he and Vilsack have had an extended discussion on the issue. 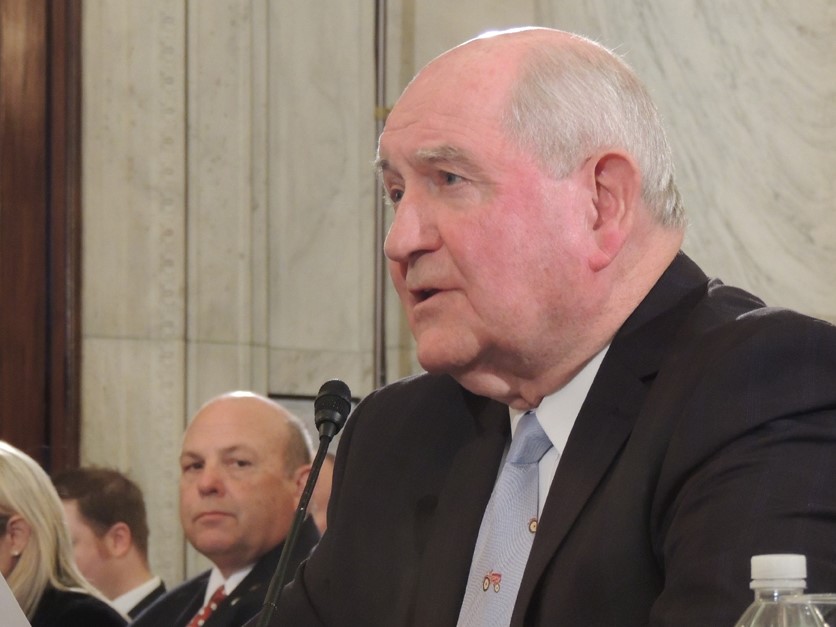 Sonny Perdue testifies as Zippy Duvall, the president of the American Farm Bureau Federation, looks on. (Photo by Spencer Chase)

Stabenow declares support for Perdue. No committee vote has been scheduled yet. Perdue will still need to respond to a number of written questions from committee members.

But the Agriculture committee’s top Democrat, Debbie Stabenow, said she planned to vote for him.“We have a nominee who understands agriculture,” she told reporters after the hearing. Committee Chairman Pat Roberts, R-Kan., chimed in that Perdue “not only knows agriculture but cares about it.”

The only dissent in the hearing room yesterday seemed to come from an animal rights protester - who briefly interrupted the hearing - and a handful of reporters. They were frustrated after the hearing that Democrats didn’t question Perdue about climate change or past ethics allegations. Stabenow said she was satisfied with the answers she got from Perdue in private meetings with him.

NFU urges Perdue confirmation. After the hearing, the National Farmers Union offered a strong endorsement of Perdue that could give him an extra boost with Democrats.

The group said it was encouraged by Perdue’s focus on trade during the hearing, including his support for easing restrictions on Cuba. The group also liked his pledge to consider providing support for dairy farmers ahead of the next farm bill.

Mystery solved: Perdue picks his tie. One of the biggest unanswered questions going into yesterday’s hearing was what necktie Perdue would wear. For agriculture’s inauguration ball back in January, he wore a bow tie with peanuts on it.

But for his hearing, he stayed away from honoring such a distinctly regional commodity. Instead he wore a light blue tie decorated with red tractors.

Brazil Ag Ministry admits no wrongdoing. The Brazilian Agriculture Ministry says it supports a police crackdown on widespread bribery in that country’s meat industry. But the ministry has declined to admit any wrongdoing in connection with the scandal.

The ministry released new details yesterday on the investigation dubbed “Weak Meat” that has led to arrests and the revocation of export licenses for 21 meat-packing plants.

The Brazilian agency says that a U.S. ban on Brazilian meat is not justified because the 21 plants that are under investigation represent just a small portion of the 4,837 facilities certified to export meat. ”We have a very strong, very robust surveillance system, recognized by the international market,” Brazilian Agriculture Minister Blairo Maggi said.

Brazil exported $300 million worth of beef to the U.S. last year.

Perdue warns import ban could backfire. USDA announced Wednesday that it is tightening scrutiny on Brazilian meat but was not banning it. Sonny Perdue was asked about the scandal at his confirmation hearing yesterday, and he said he supported USDA’s response, including its decision not to impose an import ban.

Perdue said that an import ban would invite other countries to block shipments of U.S. products. He noted that USDA has struggled to protect exports of chicken in the wake of the avian flu outbreaks. “I don’t want to punish another country,” Perdue said.

Biodiesel tests Trump on trade enforcement. U.S. biodiesel producers are asking the Trump administration to impose antidumping duties on imports of the fuel from Argentina and Indonesia. The request will be one of the first tests of how aggressive the administration is going to be in addressing complaints from U.S. industries about unfair foreign competition.

The National Biodiesel Board claims the two countries are selling into the market at below their production costs. The European Union imposed antidumping duties on Argentina and Indonesia in 2013, and Peru slapped tariffs on Argentine biodiesel last year.

The eradication effort involved releasing 154 million sterile flies and inspecting nearly 17,000 animals at checkpoints in Florida. The last inspection stations were closed over the weekend.

She said it. “You used to be very handsome.” - Sen. Heidi Heitkamp, D-N.D., to Sonny Perdue. She pointed out his son, Dan, who looks a lot like the nominee and was seated in the audience.

Spencer Chase and Bill Tomson contributed to this report.