WASHINGTON, March 29, 2017 - Regulations, access to new markets, worker availability and the estate tax: There is no shortage of challenges to the future viability of small family farms, according to witnesses who appeared before a House of Representatives subcommittee last week. 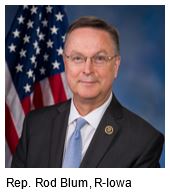 And then there’s the fact that falling or stagnant commodity prices have depressed farm income by 50 percent since 2013, said Rod Blum, R-Iowa, chairman of the Small Business Committee’s subcommittee on agriculture, energy and trade. “Small family farms have a multitude of other issues to worry about,” Blum said at the hearing. “From high taxes, increasing regulatory burdens, and trouble selling their products internationally, it seems like government bureaucracy is only making it harder to run a small farm.”

“Our biggest concern is over-regulation,” Kentucky cattle producer Tim White told the subcommittee. White, who is vice president of the Kentucky Cattlemen’s Association, spoke on behalf of the National Cattlemen’s Beef Association.

White said NCBA is pleased that President Trump signed an executive order directing EPA to “rescind or revise” the Waters of the U.S. rule, commonly referred to as WOTUS. EPA and the Army Corps of Engineers have announced their intent to do that and will consider interpreting “navigable waters” in the Clean Water Act along the lines of late Justice Antonin Scalia’s narrow reading of the term in the Supreme Court’s 2006 Rapanos decision.

Chuck Conner, president and CEO of the National Council of Farmer Cooperatives, echoed the concern about regulations, but also emphasized the importance of trade, noting that there is “pretty limited” potential for increased food demand domestically.

“If we don’t find new markets, there is absolutely no hope for the family farm, for the small family farm in particular,” Conner said. One of President Trump’s first acts was to pull the U.S. out of the 12-nation Trans-Pacific Partnership, which virtually all farm organizations strongly supported. Instead, Trump said he’d negotiate deals with individual countries.

“We preferred the multilateral (agreements) but if it’s bilateral now, get to it and get these markets open so we can get prices back to profitable levels,” Conner said.

Small family farms cover nearly half of the cropland in the U.S. but account for only about 24 percent of the production, according to a USDA report released in December, America’s Diverse Family Farms.

Using the USDA definition of small family farm – less than $350,000 in gross cash farm income (GCFI) – about 90 percent of the nation’s family farms are small. Bumping the threshold up to $500,000 GCFI, that figure increases to 93 percent of the 2.1 million farms in the country.

Farm consolidation is a “long-term trend,” according to hearing materials prepared by committee staff. From 1991 to 2015, “production by farms with more than $5 million in gross cash income increased from 13 to 23 percent.”

John Lawrence, associate dean and director for extension and outreach at Iowa State’s College of Agriculture and Life Sciences, listed the top issues facing family farms as “access to capital, technology and markets,” but added that “a strong rural economy” is a key factor.  “That may be broader than just crop insurance and farm bill-type issues,” Lawrence said. “There’s a strong synergy between small farms and small communities.”

Sarah Rickelman, manager of Degener-Juhl Farms in Hudson, Iowa, who spoke on behalf of the Iowa Farm Bureau, stressed the importance of a “strong, adequately funded farm bill,” and crop insurance in particular. Rickelman and the other witnesses also said access to high-speed internet – or rural broadband – is critically important.

“This market moves so fast now. You have to sit and watch your phone or it can move four or five dollars in seconds,” White said. “We can’t go sit on a tractor anymore and just drive and enjoy the sunshine. You’ve got to be doing this, looking at your phone,” he said, as he put his right hand on an imaginary steering wheel while his left held an imaginary cell phone.

“You have to have the technology with you. What would we do without our phones?” he said.

There was little disagreement between the representatives and the witnesses, but Rep. Steve King, R-Iowa, and Conner differed in their views on farm labor, with King saying that “there are 103 million people of working age who are not in the work force” and that among those, “we ought to be able to find some people to go to the farm and do some work.”

But Conner, who said he and King have had the same conversation in past hearings, said, “Our evidence, time and time again . . . shows that these are jobs that Americans simply will not do. I don’t think it’s fair to place it on the back of the farmer to go out there and try and solicit jobs among people.”

Conner also told Rep. Brad Schneider, D-Ill., that comprehensive immigration reform “would have a tremendous positive impact” on agriculture by creating jobs and economic growth. “We currently cannot get the labor force that we need, to do what we do for America,” he said. “It’s getting to a dire circumstance,” considering that close to 70 percent of farm labor does not have legal documentation.

White emphasized the importance of a permanent repeal of the estate tax. “Unfortunately, all too often at the time of death, farming and ranching families are forced to sell off land, farm equipment, parts of the operation or the entire ranch to pay the estate tax,” he said.

He also spoke out against the Grain Inspection, Packers and Stockyards Administration (GIPSA) interim final rule on competitive injury. “Our analysis . . . leads us to believe that if this rule is implemented, the packers will offer one price for all cattle, regardless of quality,” he said. “Packers have indicated that they are not willing to open themselves up to frivolous lawsuits and the legal risks this change in the competitive injury standard would create.”

Barbara Patterson, government relations director at the National Farmers Union, which was not invited to testify, said that low commodity prices present the biggest challenge right now to the health of family farms.

“Four straight years of farm income declines is problematic, especially for beginning farmers,” Patterson said in an interview. She added that consolidation in both the input sector and in the supply chain, where farmers don’t have as many buyers as they used to, is squeezing them financially.