AFTON, IA, April 5, 2017 - What happens when you compare the performance of two 18-wheelers using a B5 blend of biodiesel and another with B20 during a four-month trial?

During the trial period last year, the total fuel cost savings for the B20 truck amounted to $1,960, he said. This included cost savings from B20, which last year sold for a lower price than diesel or B5, thanks to strong federal and state incentives.

“We want to get the good word of biodiesel out there and encourage more farmers to use it,” Schlapia said. “Although we’ve seen biodiesel sales increase fairly dramatically in the last year, it’s surprising how many farmers say they don’t want to try it because of what they heard about it 10 years ago. We’re no longer seeing problems… only success.” 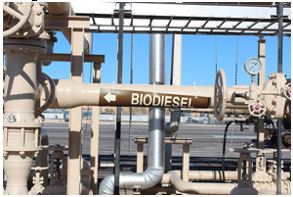 More than 95 percent of production in Iowa today is from BQ-9000 accredited producers, the biodiesel industry’s quality assurance program.

“While not everyone sees the mileage improvement that was seen in this demonstration, the enhanced lubricity, high cetane, and cleaner-burning nature of biodiesel are all factors that can lead to longer engine life and better overall performance,” said Steve Howell, senior technical adviser for the National Biodiesel Board. “Improvements in the specifications and attention to fuel quality over the last 10 years have virtually eliminated the issues some may have seen in the past with B20, even in winter.”

Iowa is the leading producer of biodiesel. The fuel is made from a variety of resources including soybean oil, recycled cooking oil and animal fats, and was the first EPA-designated Advanced Biofuel to reach commercial-scale production nationwide.