WASHINGTON, September 6, 2017 - An academic paper published in Biotechnology for Biofuels argues that  biodiesel’s benefits are even better than previous models suggest. Updated modeling from Purdue University suggests the advantage of using biodiesel has been underestimated by 10 percent.

Research has long supported the benefits of biodiesel in reducing waste, supporting domestic jobs, and reducing harmful emissions. With all these proven advantages, the remaining question has become: How much biodiesel can we make and maintain each of these benefits? For nearly a decade, EPA, the California Air Resources Board (CARB) and a handful of scientific institutions have been trying to determine how major biofuel policies might impact land use around the world.

One theory had suggested that policies promoting biofuels will produce economic incentives that encourage farmers to plant more crops. Since federal policy does not allow biofuels from new cropland to participate in incentive programs, it is assumed that these additional crops add food and livestock feed to global markets. EPA and CARB have used computer models to predict this additional production in response to the economic signal from biofuels. If there are carbon emissions associated with creating new farmland, EPA and CARB follow this theory to add those estimated carbon emissions to the lifecycle of biofuels.

This conservative approach ensures no unintended ill-effects from biofuel production, but holding biodiesel accountable for the carbon emissions from putting more food and feed in the world has affected biodiesel’s carbon score when compared to petroleum fuel. Without these indirect effects, biodiesel reduces greenhouse gases (GHGs) by 85 percent compared to fossil fuels. Including predicted indirect emissions estimates has lowered biodiesel’s advantage to just more than 50 percent cleaner than diesel fuel. That is, according to modeling done by EPA in 2010 and CARB in 2014.  Purdue University’s latest research shows these measures underestimate 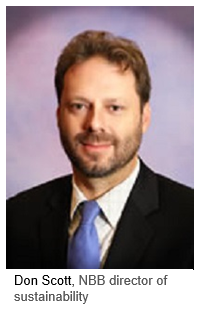 the carbon benefit of biodiesel by 10 percent.

“Biodiesel is already recognized as the commercial biofuel with the lowest net GHG emissions,” NBB’s Scott says. “The power in these new findings is that science is improving. The prediction of economic impacts and land-use change is becoming more reliable. More data has been analyzed today than has ever been available in the past. The data shows that farmers all around the world are becoming more efficient. We are feeding better food to more people, and we are doing it using less land. This is great news, because agriculture is our most powerful tool to turn solar energy and carbon dioxide into things like food and biodiesel. This is a powerful formula, because sunshine is free, and farming turns the liability of excess carbon dioxide into an asset when we use it to support American jobs. Biodiesel is a powerful driver to create jobs and help our environment. As these models look more and more like the real world, biodiesel’s extensive real-world benefits come into focus.