“We’re doing the best we can,” Mike Goodis, director of the Registration Division in EPA’s Office of Pesticide Programs, told attendees at the CropLife America/RISE annual regulatory conference in Arlington, Va. Although some executive orders, such as the one requiring two regulations be withdrawn for every new one published, have “slowed things down – at least for actions that we’re able to publish – it hasn’t slowed work we’re doing within OPP at all,” he said. (RISE stands for Responsible Industry for a Sound Environment.)

“The expectation is we’ll back to a normal process at some point,” he said.

One of the reasons for delays is that the new administration may not yet fully understand the unique role of the pesticide program, said Yu-Ting Guilaran, director of OPP’s Re-Evaluation Division. The pesticide program is partially funded through industry fees and works more in partnership with industry than other EPA programs regulating air and water pollution, whose actions are often targets of industry lawsuits.

The political team working with new EPA Administrator Scott Pruitt is “just trying to understand – what is a tolerance, what does that mean? Especially for the re-evaluation program, they don’t know that people want to see the risk assessment that we have produced, or interim decisions so they can submit comments.” 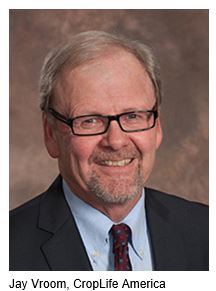 In an interview at the conference, CropLife President and CEO Jay Vroom said he appreciated the “can-do attitude” of the EPA officials, despite “distractions” such as President Trump’s proposal to cut the agency’s budget by 31 percent.

“I’m impressed with how committed and high their spirits are,” Vroom said. “They’re still doing their work. Yes, they have an administrator, but I think he has eight or 10 political staff with him, a very skeletal crew running things at the top. That’s causing some uncertainty just waiting for other key jobs to be filled.”

One regulatory manager with a company that works closely with EPA said after the conference that although he’s disappointed by the slowdown in new rules such as food tolerances, he recognizes that OPP personnel are often pulled in different directions. OPP, he said, is still “the premier regulatory agency in the world for pesticide evaluations.”

One of those directions is litigation, Goodis said. “Just about every chemical now, there’s a lawsuit,” Goodis said. “Whether it’s (the Endangered Species Act) or pollinators or some other thing.”

“Just the mundane thing of establishing the legal record for a particular case” takes time away from other tasks, he said. Those tasks include meeting deadlines required under the Pesticide Registration Improvement Act (PRIA), which requires fees and includes deadlines for many registration decisions.

Goodis said having fewer people also makes the task of meeting deadlines more difficult. “We’re always having to tackle new and complex issues, but to do that with basically less people than we had five or 10 years ago is an ongoing challenge.”

Goodis, Guilaran and other OPP officials who spoke at the conference all emphasized the importance of early collaboration with industry, especially given the challenges facing the program.

Guilaran, for example, said that her office has to finish reviewing three-quarters of the 500 conventional pesticides under review by the re-evaluation program by 2022. “Are we going to make it? That’s my concern,” she told the attendees.

“I think the number-one way we’re going to get there is collaboration internally with each other and with the stakeholders who are right here,” she said.

“Please engage our team,” Goodis said. “The more communication, the more interaction we have, the better.”