WASHINGTON, April 19, 2017- A father-and-son team whose salmonella-tainted eggs sickened nearly 2,000 people in 2010 are hoping the Supreme Court will decide that their company crimes do not warrant prison time. The case has implications for every FDA regulated facility. 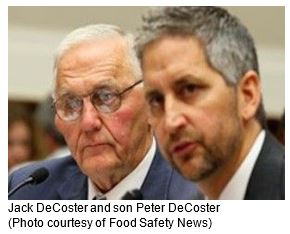 In January, they filed a petition with the Supreme Court, arguing that because they didn’t know about food safety violations at their facilities, they do not deserve to spend any time behind bars. Last week, the federal government, which was given an extra two months to respond, filed its opposition to the petition, saying the two men had agreed to be sentenced based on the facts before the judge. The high court has yet to decide if it will accept the case, which is being closely watched by food manufacturers.

Austin “Jack” DeCoster, now in his 80s, and his son Peter, were sentenced to three months in prison in 2015 after pleading guilty to three misdemeanor violations. They included bribery of a USDA inspector – for which an employee received probation – and two violations of the Federal Food, Drug and Cosmetic Act (FDCA) – introducing misbranded food into interstate commerce with intent to defraud, and introducing adulterated food into interstate commerce. The prison terms were imposed for the “adulterated food” count.

At issue is the legality of the Park doctrine, also called the “responsible corporate officer” doctrine. It’s named for a 1975 Supreme Court decision finding that the president of Acme Markets, a large retail food chain, could be held responsible for unsanitary conditions in Acme’s warehouses even if it had not been proved he knew of the conditions. John Park was fined $250.

When they were sentenced two years ago, U.S. Attorney Kevin W. Techau of the Northern District of Iowa said, “Corporate officials are on notice. If you sell contaminated food you will be held responsible for your conduct. Claims of ignorance or ‘I delegated the responsibility to someone else’ will not shield them from criminal responsibility.”

Both DeCosters are free pending the outcome of their appeal, which was rejected last year by the 8th Circuit Court of Appeals based in St. Louis when it ruled 2-1 to uphold the prison sentences.

The issue presented in the case “is critically important to FDA-regulated companies and their officers and employees,” the DeCosters said in their petition. “Essentially every FDA-regulated company that operates within the 8th Circuit” would be vulnerable “to imprisonment for regulatory violations in which they may have played no direct role,” the petition said, illustrating the reach of the FDCA by noting that it “authorizes the prosecution of a huge range of potential violations,” including “improper use of the term ‘ginseng.’”

At Quality Egg’s Iowa facilities, FDA inspectors in August 2010 “discovered live and dead rodents and frogs in the laying areas, feed areas, conveyer belts, and outside the buildings,” according to the 8th Circuit decision. But should the DeCosters have to spend time behind bars?

Even renowned food safety attorney Bill Marler of Marler Clark in Seattle says, “Depriving them of their liberty is a pretty big step.” Marler and his firm have represented victims of food contamination in several high-profile cases, including victims of the 2010 salmonella outbreak in claims against Iowa-based Wright County Egg.

On the one hand, says Marler, “I worry that if they end up not going to jail that it sends the wrong message.” But then he adds, “I’d probably vote to overturn the conviction.” He predicts that the Supreme Court will take the case.

Meanwhile, the Washington Legal Foundation said FDA has signaled its desire to go after more chief executives using the Park doctrine, citing as an example a March 4, 2010, letter from then-FDA Commissioner Margaret Hamburg to Sen. Charles Grassley, R-Iowa, announcing FDA’s intention to “increase the appropriate use of misdemeanor prosecutions … to hold responsible corporate officers accountable.” But the government said the DeCosters’ sentences “were based not on vicarious liability for others’ conduct, but rather on petitioners’ own blameworthy acts and omissions, as found by the district court at sentencing.”

The Supreme Court has not said when it will decide whether to take up the matter. “I think it would be a fascinating case to be argued in the Supreme Court,” Marler said.