China turns to USDA for help with meat-safety problems

WASHINGTON, April 19, 2017 - China, the world’s largest meat-producing and consuming country, is in the midst of overhauling its food safety system to assure 1.3 billion people that they won’t be harmed by the chicken, beef and pork they’re eating. It’s proving to be a bigger undertaking than officials there expected, so they are turning to the agency that’s often held up as the gold standard for food safety: USDA’s Food Safety and Inspection Service.

About six months ago, on Sept. 20, FSIS Deputy Under Secretary Alfred Almanza greeted Xu Jinghe and Yuan Lin when they arrived at USDA headquarters in Washington. Xu and Yuan are high-level officials with the Chinese Food and Drug Administration (CFDA), an agency that was essentially created about three years ago to replace the disgraced State Food and Drug Administration (SFDA).

SFDA chief Zheng Xiaoyu was executed on July 10, 2007, for accepting bribes for food safety licenses, and the agency’s trouble didn’t end there. Less than a year later, six babies died and hundreds of thousands of people were sickened by Chinese dairy products that were adulterated with melamine, an industrial chemical often used in plastics. And in 2013, domestic poultry producers were blamed when high levels of antibiotic residues were found in the chicken served at Kentucky Fried Chicken restaurants.

Chinese government officials, who are normally silent in public when it comes to dealing with embarrassments, are now admitting the problems as they seek to overhaul the country’s food safety system, said Tony Corbo with Food & Water Watch.

“The Chinese FDA has a lot of concerns about potential adulteration in the food supply,” Corbo said. “They openly say it.” That openness was on display in December, following the 2016 China Special Food International Conference, when CFDA Minister Bi Jingquan released a massive report that, according to media and government accounts, spurred the Chinese legislature to issue 926 new national food safety standards.  Hundreds more are scheduled to be released in the near future.

The government also announced two new five-year food safety plans (one for food and one for drugs) in February.

“The plan outlines that by 2020 sample tests should cover all kinds of food,” especially those produced with pesticides and veterinary drugs, according to a summary published in English by the government. “Over 300 national standards are planned to be set during the next five years. The standards will cover all consumer foods, agricultural products and pesticides. Domestic standards will be pushed to catch up with international levels of quality. Also, all standards will be open to the public online.” 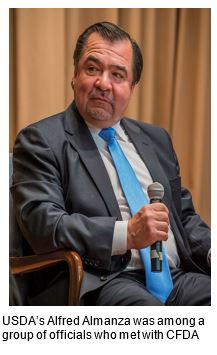 Bi himself openly talked about the challenges of building a comprehensive agency responsible for making sure all of the drugs and food, including meat, are safe. Just last month at an event in Beijing, Bi admitted that improvements were needed.

“Many of our front-line food safety inspection staff lack the professional knowledge or equipment for timely detection,” he said, talking about efforts to detect residues of chemicals such as veterinary drugs in meat. Quoted in a Food Navigator-Asia story, Bi went on to say, “A tracing system for problem-animal food products will be established to help correct the problem from its origin.”

These are the kinds of problems that CFDA’s Xu (director general for legal affairs) and Yuan (director general of international cooperation) brought up in their meeting with Almanza and other FSIS officials in September, USDA officials told Agri-Pulse.

The September meeting was classified as a “meet and greet” affair, but the CDFA officials came with many questions, such as:

How many meat inspectors does FSIS have? How does FSIS coordinate with the FDA? Does FSIS treat smaller producers differently than larger producers? When an inspector finds a problem on the production line, can the agency track the product back to the farm or ranch where the animal was raised? Are companies penalized for safety violations? What are the best ways to sample meat for pathogens and chemical residues?

To answer these questions and others, FSIS agreed to send a team to Beijing to hold a seminar – essentially a meat-safety 101 class – for CFDA officials who were eager to learn.

It was so successful, FSIS has conducted two such seminars so far.

When asked why USDA agreed to mentor CFDA, one USDA official simply said it’s better to have more safe food in the world and that the seminars are a show of goodwill to a country that buys billions of dollars of U.S. agricultural commodities.