“We would not give it a very good grade,” said Ralph Rosenberg, executive director of the Iowa Environmental Council, referring to the legislative session, where state lawmakers dodged a bullet in terms of a water quality lawsuit and also voted to kill off the 30-year-old Leopold Center for Sustainable Agriculture at Iowa State, which has sought to balance farmers’ need to make a profit with conservation of natural resources (see brief, page 14).

Iowa Farm Bureau President Craig Hill said his members “are disappointed that the legislature was unable to reach an agreement on a long-term water quality funding source, and will continue to work with legislators next year to achieve consensus on long-term funding to support successful collaborative efforts.”

And Iowa Soybean Association CEO Kirk Leeds called the session “a missed opportunity to act boldly on improving Iowa’s water.” “While the Iowa House advanced a substantive bill that ultimately fell short of making it to the governor’s desk, we’re disappointed that action providing long-term funding for a watershed-based approach to conservation will have to wait another year.” 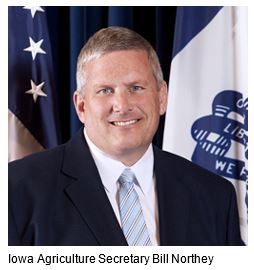 Bill Northey, secretary of the Iowa Department of Agriculture and Land Stewardship, took a more measured approach, thanking legislators for the $10.5 million, “which will allow us to continue to expand the efforts already underway.” At the same time, however, he also said he was “disappointed the legislature was not able to reach an agreement on a long-term water quality funding source.”Instead, the legislature provided $10.5 million for the state’s Water Quality Initiative, the action plan for the four-year-old Nutrient Reduction Strategy (NRS), a long-term effort that outlines ways to voluntarily reduce nitrogen and phosphorus loads reaching the Mississippi River by 45 percent. The goal is in line with a 2008 Hypoxia Action Plan for the Gulf of Mexico developed by a federal/state task force.

The money appropriated falls far short of what the NRS calls for. The strategy estimates that achieving the hoped-for nutrient reductions will require an initial investment of anywhere from $1.2 billion to $4.8 billion, with annual costs from $77 million to $1.2 billion. Spending on the NRS – which is made up of a mix of longstanding public and private conservation/cost-share programs, along with some new funding – was $112 million in 2015 and $122 million in 2016. No estimate is available for fiscal 2017, which ends June 30.

Meanwhile, Bill Stowe, the general manager of the Des Moines Water Works which sued three watershed districts over nutrients, has been sharply critical of “unregulated” agriculture and the state’s collaborative approach to conservation. “The old business-as-usual, voluntary-only approach will never result in the 45 percent nitrogen reduction,” Stowe said earlier this month in announcing that DMWW would not continue to pursue a lawsuit seeking to hold drainage districts legally accountable for upstream pollution.

DMWW has spent millions in treatment to reduce nitrate levels to meet drinking water standards, and is looking at a near-term expenditure of about $15 million, according to spokesperson Laura Sarcone. The utility’s 500,000 ratepayers will likely see their bills increase.

DMWW is the largest and most visible of the water systems in Iowa dealing with high nitrate levels, but 42 other public drinking water systems in the state have to treat their water to meet the drinking water standard for nitrates of 10 parts per million, says Susan Heathcote, water program director at the Iowa Environmental Council (IEC), relying on information provided by the state Department of Natural Resources. Another seven use blending to achieve compliance.

The IEC “sees some urgency for action in Iowa to reduce nutrient pollution,” Heathcote says, citing a recent IEC report that reviewed studies that found ‘increased health risk for some cancers (bladder and thyroid) and some birth defects with exposure to nitrate in drinking water at 5 ppm and above.” 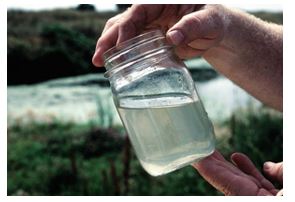 Agriculture has a big role to play in the debate. The Nutrient Reduction Strategy estimates that nonpoint sources, including runoff from farms and ranches, account for 92 percent of all the nitrogen and 80 percent of the phosphorus entering Iowa streams annually. But DMWW asserts, “Without proper funding and water quality data to measure progress,” the strategy cannot meet the nutrient reduction goals.

John Lawrence, director of the Iowa Nutrient Research Center, agrees that the nutrient reduction goals are ambitious. “It’s not just a few tweaks here and there,” he says. Achieving success will require a “massive change in the way we farm.”

There has been progress, Lawrence says, pointing to an increase in cover crops from 10,000 acres in 2009 to about 600,000 last year. But considering the NRS’s goal of between 12 million and 16 million acres planted to cover crops, he adds, “It’s the scale that is daunting.”

An NRS progress report, released last fall, said the increase in cover crop acreage “only scratches the surface” of what might be needed to meet nutrient reduction goals.

Another obstacle is the bottom line. Lawrence and others interviewed by Agri-Pulse say that farmers need help when installing edge-of-field features such as denitrification bioreactors or wetlands, which don’t add to their profit margin.

“If it would’ve been more profitable for them to use the practices, they would have been doing it,” Lawrence said. “Bioreactors create no value to farmers putting them in.”

Asked whether regulations are needed to require some type of conservation, Lawrence says he doesn’t have a good answer, but says regulations require enforcement, which creates its own set of issues.

Jamie Benning, water quality program manager for Iowa State University Extension and Outreach, argues that the voluntary approach works in Iowa because of the variable landscape. Not imposing a “one-size-fits-all” template gives farmers “the flexibility and ability to be more creative and select practices that are best suited” for their farms.

But Benning also notes that while farmers have been snapping up cost-share money to plant cover crops, the costly edge-of-field practices have not been received with as much enthusiasm. She said a bioreactor can cost between $10,000 to $15,000 for 50 acres, with saturated buffers coming in at about half that amount.

The IEC’s Heathcote says the NRS is a good plan, but that “there should be some base level of conservation required” and that “it might make it easier for Iowa’s farmers if everyone in the Corn Belt had a similar soil and water conservation requirement.”

Whatever is needed, however, costs money, Heathcote says. “We just don’t have enough cost-share dollars to do design and go out and promote practices, and work one-on-one with farmers.”

The goals are difficult to achieve “when you don’t know what your long-term funding is going to be.”