WASHINGTON, April 26, 2017 - U.S. producers are crying foul about Canada’s new milk proteins pricing scheme and its impact on U.S. exports, while Canada’s ambassador to the U.S., David MacNaughton, counters that American producers are scapegoating Canadians for their own overproduction. The facts include these two: Canada has changed its tightly managed milk pricing system to its own market advantage, and U.S. farmers have been producing more milk than the market can use. 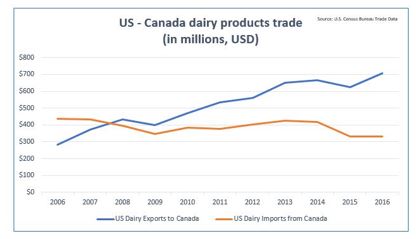 “Canada does not accept the contention that Canada’s dairy policies are the cause of financial loss for dairy farmers in the United States,” MacNaughton said, although some U.S. farmers near the Canadian border are losing milk sales directly because cheese processors in Ontario have stopped buying ultrafiltered (UF) milk from across the border. But he notes that a lot more dairy products move north than south across the U.S.-Canada border (see graph). The truth is, he said, “both Canadian and American farmers have been dealing with international pressures of low world prices and a surplus of skim milk solids.”

U.S. producers, especially in New York, Wisconsin and Minnesota, where exports of UF milk and other milk protein isolates (skim and whole milk powder, evaporated milk, etc.) are being curtailed by recent market directives by Canada and its provinces, are exasperated. Canada managed to exclude dairy, poultry and eggs from the North American Free Trade Agreement when it was inked a quarter century ago and has not relented since on its import barriers to those commodities.

Nonetheless, the industry wasn’t producing UF milk when NAFTA was drafted; Thus, the product has faced no Canadian tariffs and no quota limits. John Newton, the American Farm Bureau Federation’s market intelligence director, notes in his recent posting about the kerfuffle that in 2008 Canada began to restrict imports of milk protein isolates to10,000 metric tons a year, yet NAFTA prevented it from applying that quota to U.S. UF milk.

Chris Galen, communications vice president for the National Milk Producers Federation, says Canada’s supply and pricing management system has long meant markedly higher prices for Canadian farmers’ milk than prices across its border, so processors invested in plants to buy cheaper U.S. milk and process it for UF milk shipments to Canada. The result has been lively growth: Milk protein isolate exports to Canada have more than quadrupled in the past three years, to 51,500 metric tons and to a value of about $102 million in 2016.

In perspective, the $102 million is just 0.3 percent, by value, of last year’s U.S. milk production. But protein isolates are a crucial market channel for some farmers and processors in northern border states who make UF milk for Canadian cheese plants. In fact, last week’s USDA milk production reports showed first-quarter 2017 milk production in New York, Wisconsin and Minnesota, combined, was up by 7.1 percent since March 2015, double the U.S. rise in output during the same two years.

Galen says the northern processors and farmers were just able to take advantage of Canadian demand for UF milk. Farmers have invested in cows, just as processors have spent for facilities to manufacture that product. Now they face Canada’s new “Class 7” pricing scheme, which is “designed to undercut U.S. imports into Canada, as well as U.S. powder exports to the world market,” Galen says. It creates a low milk price for milk protein isolates “to undermine the lowest of the U.S., EU and Oceania prices” for the same products, he says.

“Beyond the hit to bilateral trade,” Galen says, producers have a broader worry that the new pricing is apparently “designed to enable the dumping of Canada’s structural surplus of skim milk powder at below the cost of production” in ways that would violate Canada’s commitment to limit export subsidies. 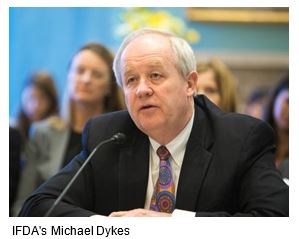 Michael Dykes, president of the International Dairy Foods Association, says the conflict arises from Canada’s very high domestic use of butter. Provinces raised milk production quotas to ensure more butter production, but that spelled mounting surpluses of milk powder that had no market, especially at its mandated high prices. Hence, the Class 7 pricing, created to get UF milk and milk powder into the world marketplace.

Thus, Dykes says, “Canada, the world’s highest-price dairy producer, is now able to sell skim milk powder in the world market and undercut other sellers. Its skim milk powder exports for January/February were up 289 percent from 2016,” he notes. “To do that, you must sell under the cost of production and/or have a subsidy program.”

President Trump sounded off against the Class 7 scheme, too, last week in comments about his plans to kill or redo NAFTA. He said Canada’s actions were “very, very unfair.” This week, Commerce Secretary Wilbur Ross followed up by imposing preliminary anti-subsidy duties of 20 percent on Canadian softwood lumber imports, a response to American lumber companies which have long complained that Canadian loggers’ harvests in public forests is an unfair subsidy.

Sec.  Ross on Tuesday told reporters the investigation into the Canadian lumber situation was underway before the dairy dispute broke open. But he said he couldn’t say it would not have an impact on milk negotiations, or on future talks related to NAFTA.

Meanwhile, U.S. dairy market prices have sunk since early 2017, with futures prices for milk, cheese, butter and powdered milk all down sharply. World export prices for dairy products, as reflected by the U.N. Food & Agriculture Organization’s Food Prices Index, also appear to be weakening recently, after graining some strength through 2016.

Are American farmers overproducing on a national scale? Somewhat, it appears, but the softer market can also be blamed on weak demand for some products.

“We’ve got plenty of cows, lots of milk, and piles of dairy products. The spring flush is upon us and (stocks of) components are up noticeably,” says Sarina Sharp, Milk Producers Council news editor, in her market commentary. Although exporters continue to ship hefty volumes to Asia, she said, domestic demand has slackened for some products, and cheese stocks keep building.

USDA’s Dairy Market News chimes in that cheese processors “have started to turn away spot milk … due to cheese stocks being at or near capacity. Class I (fresh liquid products) demand is not helping the supply situation. School districts are reportedly not ordering as much as expected following spring break.”

Dykes says world production is rising in dairy exporting countries such as New Zealand, Canada and in the European Union. In the U.S., “feed prices are low, the commodity costs are low, so I think dairy farmers are expanding production.” Thus, it’s not a surprise that USDA continues to project a 2 percent jump in output for this year, despite the plentiful dairy stocks.