WASHINGTON, April 26, 2017 - Republican demands for cuts to the Supplemental Nutrition Assistance Program slowed down consideration of the 2014 farm bill, and the issue is likely to surface again when the House writes a new bill in coming months. But if Republicans try to go too far, they’ll drive away Democratic votes in the House and cause problems for the bill in the Senate as well, says the top Democrat on the House Agriculture Committee, Collin Peterson of Minnesota. 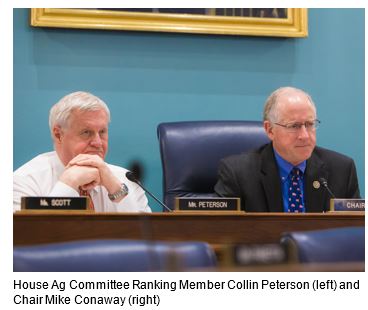 “As long as SNAP is not fooled around with, and not separated from the rest of the farm bill, I think we’ll be fine,” Peterson told members of the North American Agricultural Journalists on Tuesday. What would be a deal breaker for Democrats? Tightening the work requirement for able-bodied adults without dependents could be one. “I don’t think it’s worth blowing the whole deal up” over that issue, Peterson said.

House Agriculture Chairman Mike Conaway, R-Texas, hasn’t revealed what changes he will seek to make in SNAP, but he has questioned the adequacy of the work requirement and also has expressed concern that low-income people lose SNAP benefits too abruptly as their income rises.

He told NAAJ members that he would propose “meaningful, positive reforms” to the program. He recently met with several anti-hunger groups to solicit their ideas. “I’m not intending to do anything to flush my Democratic colleagues off the bill,” he said, adding that he knows “every vote counts.”

Conaway said he hoped to begin moving the farm bill late this year or in early 2018. He said his responsibility for leading the House investigation of Russian interference in the 2016 election would have no effect on the farm bill timetable. The House Agriculture Committee will have listening sessions around the country in coming months likely linked to existing events, Conaway said. There also may be additional subcommittee hearings, he said.

On another farm bill issue, Conaway made clear that he expects to address complaints about differences in county payments under the Agriculture Risk Coverage program. He said it will mean addressing the data used to calculate the payments. The American Soybean Association believes that ARC calculations should be based on the Risk Management Agency’s county yield data, when available, rather than data from National Agricultural Statistics Service surveys.

Senate Agriculture Chairman Pat Roberts expressed confidence that GOP leaders would give him floor time for the farm bill, in part because of the downturn in the farm economy. “We’re in a rough patch right now,” he said.

Roberts also told NAAJ members he is counting on Agriculture Secretary Sonny Perdue to ditch two rules affecting livestock and poultry producers: An interim final rule intended to make it easier for producers to sue processors over contracting disputes and another tightening animal welfare standards for organic producers. The organic requirements “may force a lot of organic livestock and egg producers out of business,” Roberts said. “I will certainly bring this issue up with the new administration to see what can be done.”

Among other things, the organic rule would require laying hens to be allowed to roam on the ground outside their barns. Some producers say they don’t have the space around their barns to do that on their farms and that it would expose the birds to disease.