Perdue takes on immigration, trade, ‘the Cage’ on first day as Ag Sec

He started at 8:30 a.m. Tuesday when he was sworn in by Justice Clarence Thomas at the Supreme Court. By evening he’d introduced himself to his co-workers at USDA headquarters and met with President Trump, who assigned him to lead an interagency effort to find and come up with fixes for the most vexing problems facing U.S. farmers.

“I’m excited about the opportunity and ready to go to work, roll up my sleeves and make sure that we make American agriculture as great as it can be in the future for rural prosperity and for jobs,” Perdue said after the White House roundtable with the president, 14 farmers and prominent ag sector leaders.

Just before the meeting, Trump signed an executive order, implementing the task force that Perdue will lead. The task force, which includes representatives from Treasury, Commerce, Interior and several other departments, was given 180 days to identify “legislative, regulatory, and policy changes to promote in rural America agriculture, economic development, job growth, infrastructure improvements, technological innovation, energy security, and quality of life.”

The scope is broad, encompassing some of the most difficult problems farmers face, including a potential overhaul to the way farmers get the immigrant labor force they need to work in dairies and harvest America’s fruit and vegetables.

Trump, Perdue said, challenged him to find solutions. “We talked about how we can work with the secretary of labor in the guest-worker program, to make it work like it should again,” Perdue said. “We look forward to that challenge.”

Iowa Agriculture Secretary Bill Northey, who was part of the roundtable discussion with Trump and Perdue, told Agri-Pulse that Trump asked in-depth questions about the labor needs of farming operations.

The only legal guest worker program is the much-maligned H-2A program. Farmers complain that the program is slow, expensive, inefficient and often results in labor arriving after harvest season or not at all. 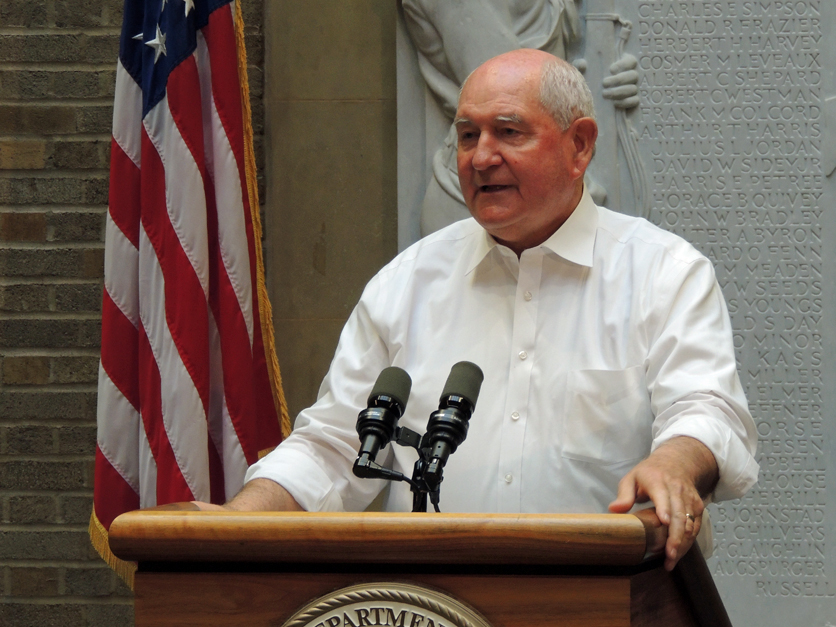 Perdue addresses USDA employees just after being sworn in

Beyond the interagency task force, which will likely hold its first meeting in June, Perdue said his top priority is expanding foreign markets for U.S. farm commodities.

He said he understands farmers’ anxiety about Trump’s trade policies, including his pledge to scrap or renegotiate NAFTA, but stressed that both he and the president know how important trade is to the ag sector.

“Trade is going to be at the top of our agenda,” Perdue told several hundred USDA employees, gathered at USDA headquarters Tuesday morning. “We’re in a nation that’s been blessed with an abundance of the safest, most available and most inexpensive food in the world.”

Perdue said he had discussions with 75 senators during his confirmation process and expanding trade was a common factor in the conversations.

“We need to have good trade policy because our producers out there are so productive, we’ve got a lot of stuff to sell and we’re going to sell it worldwide,” he said.

“Secretary Perdue has a long history of working on trade issues,” Block told Agri-Pulse. “He worked on trade when he was a governor in Georgia and he’s going to step right up.”

Perdue appeared anxious to get to work, making a show of taking off his jacket and tie and rolling up his sleeves during the speech.

“I was a farmer first … This job at USDA is about work. It’s about getting stuff done,” Perdue said. “We’ve got a lot of people depending on us.”

But as he gets to work, the new USDA chief said he doesn’t want to do it in a place that’s called “the Cage.” That’s the informal name USDA employees use for the secretary’s suite of offices on the second floor of USDA headquarters. The suite is surrounded by a glass enclosure that does resemble a cage, but Perdue said he doesn’t want anyone calling it that.

“Well, I don’t know about you, but I don’t cage too well,” he said to laughter and applause.

Perdue also took time to move through the crowd of employees, shaking hands and posing for photos, but was eventually escorted up a winding staircase to his second-floor office behind the glass-enclosed structure that needs a new name.