Did the ‘March for Science’ help or hurt new scientific investments?

WASHINGTON, April 26, 2017 - Facing the White House across the Mall, speakers at Saturday’s Earth Day March for Science blasted what they called the Trump administration’s assault on science, research, and clean energy. Yet others complained that marchers were simply politicizing the essential work that should ideally be non-political. 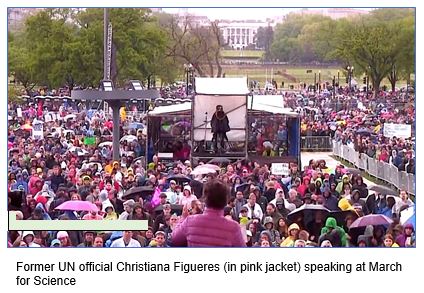 The March for Science is a “terrible idea,” wrote Robert Young, a professor of coastal geology at Western Carolina University, in a New York Times op-ed prior to the march. He wrote that trying to recreated the political Women’s March “will serve only to reinforce the narrative from skeptical conservatives that scientists are an interest group and politicize their data, research and findings for their own ends.”

Yet, the march went on, bringing dozens of high-profile speakers to the National Mall and to about 600 other locations around the country and overseas.

Climate scientist Michael Mann, director of the Earth System Science Center at Penn State, called for basing public policy on “an objective assessment of scientific evidence.” He warned that “Never before have we witnessed science under the kind of assault it is right now. Never before have we needed science more to deal with the changing climate.”

Christiana Figueres, the former head of the United Nations Framework Convention on Climate Change, warned that “Climate change is already upon us and if we do not do something about it, it is only going to get worse.” She called for action to ensure that “energy is forever renewable and accessible to all.”

Some business leaders are also voicing their concern about Trump’s proposals that would reduce federal funding for research and development (R&D) and eliminate high-return federal programs such as the Energy Department’s Advanced Research Projects Agency-Energy (ARPA-E) initiative and its Energy Star program.

A group called the American Energy Innovation Council (AEIC), for example, says cashing in on America’s new age of energy abundance requires acknowledging that today’s achievements “can be attributed to federally-funded technology research and development that has occurred over many years, enjoyed bipartisan support, and which the private sector has relied on to help to commercialize market-creating technologies.”

Responding to those concerns, President Trump said in a White House statement Saturday that “Rigorous science is critical to my administration’s efforts to achieve the twin goals of economic growth and environmental protection . . . Rigorous science depends not on ideology, but on a spirit of honest inquiry and robust debate.”

Trump added that his administration is “committed to advancing scientific research that leads to a better understanding of our environment and of environmental risks.”

Opinion: Move over physics: for the new administration, ag science must now lead the way
Where will energy investments fit in a new infrastructure bill?

Despite Trump’s commitment to pursue “rigorous science,” his budget proposals include sharp cuts for federal energy and climate research programs.

The AEIC/Bipartisan Policy Center’s Power of Innovation report published earlier this month concludes that “Federal support for energy innovation has waned – even as our trading partners have increased their own commitments – despite clear evidence that targeted public investments have paid handsome dividends to taxpayers.” AEIC says the global energy market attracted $1.8 trillion worth of investments in 2015 alone, “in what should be a clear signal to our leaders that advanced energy technologies represent a multi-trillion-dollar opportunity for American businesses and workers.”

The report’s recommendations include fundingARPA-E at $1 billion per year, although it says at a minimum, ARPA-E should receive $300 million per year. The report notes that this federal initiative supporting advanced energy launched in 2007 has already achieved impressive returns, yet appropriated funding peaked at $291 million for 2016. In sharp contrast, Trump’s March budget proposal calls for ending ARPA-E.

AEIC acknowledges that “a tight federal budget continues to lead to underinvestment in the types of innovation we need to revitalize our economy.”

The report points out that unlike many other technology sectors, “the energy sector in particular has suffered from underinvestment in research and development and goes on to explain why.

“As a generally low-cost commodity, it is often difficult for an energy supplier to differentiate itself and charge a premium, the way products in other markets like communications hardware or biomedical technologies might.” In addition, “Energy infrastructure and technologies are also generally high cost and long lived, leading to large amounts of inertia and, in some cases, risk avoidance.” 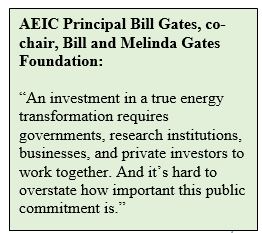 AEIC acknowledges there has been some recent progress: “In 2010, when we initially made this recommendation, the federal commitment to energy research, development, and demonstration was roughly 0.044 percent of the nation’s energy bill. By 2016, that number had climbed to just over 0.06 percent, or $6.4 billion.” But AEIC also stresses that “in historical context, since 1987 energy research has decreased from 14.4 percent of federal R&D outlays to 5.3 percent by 2017.”