WASHINGTON, April 25, 2017 -- With President Donald Trump’s axe thought to be looming over the entire North American Free Trade Agreement, three veteran advocates for the U.S. agricultural and manufacturing sectors called Wednesday for improving the 23-year-old pact while warning against economic damages of killing it.

In a counterpoint to Trump’s condemnations of the agreement – this week he said NAFTA “was a disaster and continues to be a disaster for our country” – all three speakers on a Farm Foundation paBnel at the National Press Club emphasized how extensively the accord has promoted integration of their Canadian, Mexican and U.S. sectors, and how much their continued business success depends upon that integration.

“The statements in the news that NAFTA has been . . . the worst trade agreement: That’s fake news,” said Bob Stallman, a Texas rice farmer and former president of the American Farm Bureau Federation. “I’m sorry, it’s just not accurate,” he said.

Instead, he summarized the long-term impact of NAFTA as adding a half percent annually to U.S. GDP growth, and for consumers, “lower prices and more choices” when they shop.

Meanwhile, Stallman said, American producers of all sorts have extensively integrated their businesses across the northern and southern borders to their benefit. The volume of agricultural trade since 1993 illustrates hi point, he said. (see chart) 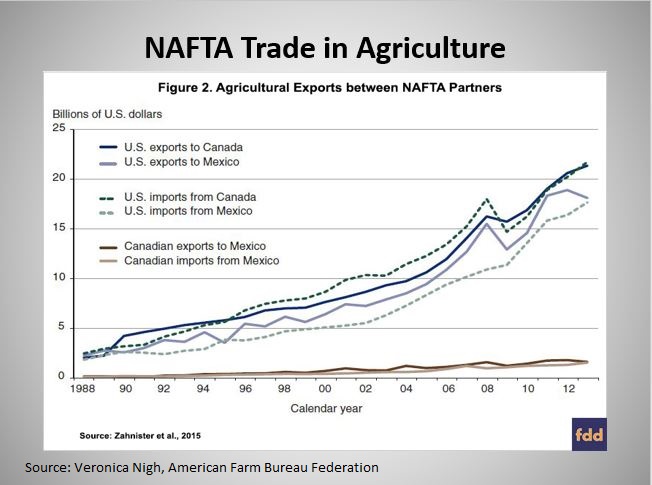 Young Mexican cattle are imported, fattened and slaughtered in the U.S.,” he said, “then shipped back to Mexico in boxes. The [cattle sector] relationship is similar for the U.S. and Canada.” And as a rice farmer, he said that he watched NAFTA step Mexico’s import tariff on his commodity down to zero while American rice growers expanded from 9 percent to 21 percent the share of rice exports headed for Mexico – now by far their top foreign market.

Others on the panel echoed Stallman’s points. Integration of the continent’s three big economies “has enabled a competitive U.S. manufacturing industry,” said Linda Dempsey, the National Association of Manufacturers’ vice president of international economic affairs. U.S. manufacturers have “tripled exports to Mexico and Canada since 1993,” she reported, and more than a third of American manufactured exports go to those two countries. “In fact,” she said, “84 percent of Mexico’s manufactured imports come from the United States, and 73 percent of Canada’s come from the United States.”

Melissa San Miguel, the Grocery Manufacturers Association’s global strategies director, also stressed the economic importance to North American economic integration. She pointed out that food and beverage makers are the largest employer in the U.S. manufacturing sector and that nearly half of all U.S. processed food and beverage products are destined for Mexico and Canada. For example, she said, 90 percent of Canada’s oat exports go to the U.S., where they are processed into countless products, with much of them shipped to Canada, Mexico and other foreign markets. draft executive order

All three speakers at Wednesday’s forum counseled strongly against killing the trade pact. And late Wednesday night, the White House released a statement saying the president had agreed not to terminate the deal. Instead, the statement said, the leaders of Canada and Mexico have agreed to "proceed swiftly" to renegotiate the agreement. Trump said he wants to "bring NAFTA up to date through renegotiation."

“It is worth noting that NAFTA gives the United States much more preferential access to Mexico than it gives Mexico to the U.S.,” said Dempsey. So, “in the absence of NAFTA, U.S. manufacturers would face more than twice the tariffs as those Mexicans would face in the U.S.,” she said.

On the other hand, “A lot has changed since 1993,” she said, and “NAFTA is certainly in need of updating,” including market access for some products withheld by Mexico and Canada in the pact, better adherence to science-based rules for food safety, reciprocal access to government procurement markets, and so forth. NAFTA improvements might even spell some collaboration by the three countries to address unfair trade practices by China, she suggested.

As a first step, Stallman urges the U.S. administration to hold preliminary trilateral meetings with Mexico and Canada to look for ways to improve NAFTA, “and at the same time, don’t go backwards” and retract rules that are helping promote North American trade.

But, he said, “to make that happen, all industries are going to have to start stepping up more than what has happened so far,” pressuring Trump and Congress, and making a stronger case to the America public as to “why trade matters and why trade is good.”