WASHINGTON, May 3, 2017 - Last week was a roller-coaster ride for U.S. agriculture after President Donald Trump first threatened to pull the U.S. out of the North American Free Trade Agreement (NAFTA) and then, almost as suddenly, announced he was willing to negotiate with Mexico and Canada to keep the trade pact alive – maybe.

U.S. farm groups, one after the other, are sending their highest-ranking representatives to Mexico to try to reassure buyers that the U.S. will remain a stable source of corn, soybeans, dairy, pork and beef. It has become increasingly difficult because Trump continues to threaten to pull out of the 23-year-old deal that assures billions of dollars of U.S. agricultural commodities continue to flow south of the border.

“Well, I was going to terminate NAFTA as of two or three days from now,” Trump told reporters last Thursday, but said Mexico’s president and Canada’s prime minister persuaded him to hold off. And Secretary Perdue managed to arrive at the White House just in the nick of time with a graphic explaining the disastrous economic and political implications of withdrawal.

It wasn’t the ironclad commitment that farm groups would have liked, but it meant disaster was at least temporarily averted. What it didn’t do was stop Mexican importers from reaching out to suppliers including Argentina and Brazil in case a trade war erupts with the U.S.

It’s that uncertainty spreading through Mexico that spurred U.S. Grains Council President Tom Sleight to lead a delegation there last month, and it’s why two more similar trips are planned later this month and in June.

“They were upset,” Sleight told Agri-Pulse, referring to Mexican importers. “So, we decided to go down there – myself and (USGC Chairman Chip Councell) – to basically listen to them, to hear what they had to say … We went from Mexico City to the West Coast and then over to the Yucatan Peninsula. And every stop along the way they were all very concerned, asking questions like, ‘Why are you doing this to us, your best customers?’”

But perhaps most concerning was all the talk of a ‘Plan B’ by Mexico’s corn and soybean importers, said Sleight. They hadn’t signed up with other suppliers, but they were preparing to, he said.

That’s why farm groups are scared about the prospect of losing the trade pact or even allowing other nations to chip away at U.S. dominance in the Mexican market.

“So far it’s just talk, but I think what’s happening is companies are actively looking at sourcing elsewhere,” Sleight said. “The week before we were there, Argentina had a mission coming through, visiting the same people we had met with, talking about sources of supply.” 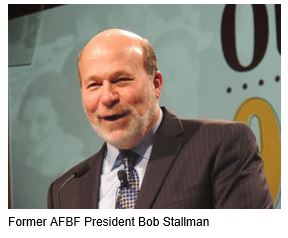 Bob Stallman, a former president of the American Farm Bureau Federation, said last week that the Mexicans are positioning themselves just in case NAFTA falls apart.

“I think everybody is looking at the landscape and seeing how to position themselves in case something does happen,” Stallman said. “The Mexican buyers are smart. They want to hedge their bets. They want to be ready to deal with whatever they get.”

And what they will get is still uncertain. That was part of the motivation behind a trip to Mexico in April by the USA Rice Federation. U.S. farmers provide nearly all of Mexico’s rice imports, but the country recently opened the door to Vietnamese, Thai and other rice.

On March 1, Mexico opened up a 150,000-metric-ton tariff rate quota for rice imports from countries that don’t already have a free trade agreement with Mexico.

“The direct and positive impact that NAFTA has had on U.S. rice exports and on jobs and prosperity in Mexico and the United States must be continually emphasized,” said USA Rice President Betsy Ward, who was in the delegation that visited Mexico. “We will be working together to preserve the benefits of NAFTA for the U.S. rice industry, as well as for our Mexican partners.”

What farm groups say they want most is an expansion in foreign markets, but barring that, they say a stable trading relationship is paramount. And importers want to know that their supplier today can be counted on to keep delivering corn, soybeans, wheat, rice, pork and beef in the future.

“Being a reliable supplier is an important characteristic of agricultural exporters,” said Gary Schnitkey, Kathy Baylis and Jonathan Coppess of the University of Illinois in a new report. “If an exporter is not viewed as reliable, other countries may look elsewhere for grain supplies.”

That’s why USGC’s Sleight is going back to Mexico later this month and then taking the entire board in June.

“We can’t take our competitive edge for granted and we don’t want to inject politics into the buying decision,” Sleight said.

Part of that edge is the fact that there are no Mexican tariffs on U.S. corn. There is a tariff on Argentine corn, but that could change quickly.

“There have been talks about relaxing that tariff,” Sleight said. “Mexico can drop that tariff to zero and there’s talk of doing that.”