WASHINGTON – May 10, 2017 - Agriculture Secretary Sonny Perdue hit the ground running in his first two weeks on the job, meeting with President Trump in the White House, traveling to Kansas, Iowa and Arkansas and working on his subcabinet nominees. A number of top-tier names have been sent to the White House, waiting for the president’s approval. In the meantime, Perdue has a small but mighty team of advisors already on the job. Here’s a look at some of the folks you are likely to meet in Perdue’s inner circle and their roles at USDA:

Green is a longtime ally of the former Georgia governor, working with the new Secretary as far back as his gubernatorial transition team in 2002. She shares his “sunny” disposition and “can do” attitude, but – because of her longstanding working relationship – she is also the one most often tapped to deliver any negative news.

The California native first worked on Capitol Hill for Rep. Bill Thomas, R-Calif. Later, she established her Georgia credentials by working for Republican Sen. Paul Coverdell from the Peach State. Since her early days of working with Perdue, she’s served as an advisor on economic development, transportation, and other issues before ultimately rising to the rank of commissioner of the Georgia Department of Economic Development. In a 2007 release, Perdue called Green “an integral member of our team” and cited her “wide range of experience in negotiating difficult policy issues.”

A native of Fitzgerald, Georgia, Young graduated from the Georgia Institute of Technology, earning a B.S. degree in history and a law degree from the University of Georgia before being tapped by Gov. Perdue as Chief of Protocol and Director of International Affairs in 2005. In that role, he helped grow Georgia’s international footprint, organizing visits for dignitaries and planning gubernatorial and senior official missions to almost 20 foreign countries.

"I tell people that protocol is the science of creating the right conditions for business and diplomacy to succeed,” Young said in a video interview with GlobalAtlanta.com in 2009. Just one year earlier, Young was named to a two-year term as president of the Protocol and Diplomacy International-Protocol Officers Association – the association’s youngest president and current governance chair.

The Missouri native is familiar to many in agriculture circles, thanks to his work in the industry and time on Capitol Hill. Most recently, Klip – as his friends call him – served as the executive director of Protect the Harvest, the Lucas Oil-backed initiative “created to preserve the freedoms of American consumers, farmers, ranchers, outdoor enthusiasts, and animal owners.” He’s a high energy guy, whom one long-time friend described as “the Energizer Bunny, working at a pace, both mentally and physically, that wears out his co-workers and colleagues.  It won't surprise anybody that watches him that he runs marathons.” The George Washington University graduate is known as an experienced straight-shooter, with a wealth of agricultural knowledge.

He also understands Missouri and farm politics like none other, after years of honing his political skills on the staffs of Missouri Republicans Rep. Tom Coleman and Sens. Kit Bond and Roy Blunt. Klippenstein was among the small transition team first at USDA and was initially planning on that experience being the length of his tenure. Now, he’s full-time with USDA, but plans to work out of agency offices near his home in the Kansas City area whenever possible.

Clovis was a fixture in the ag policy corner of the Trump campaign, serving as a national chief policy advisor who engaged in several different capacities. His responsibilities may not be exactly well-defined at USDA, but sources say his influence can be felt across many different areas of the department, and he remains very well-connected to the White House – an important asset for the agency. 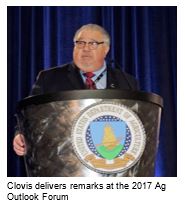 The Kansas native served as a surrogate for the president on ag issues and led the transition team at USDA. The former Morningside College economics professor was active in the Iowa conservative scene, even hosting a talk radio show on local radio. Friends describe Clovis as a great spokesperson who’s knowledgeable on a wide variety of issues including agriculture, defense, and foreign policy.

In 2014, he made a run for the U.S. Senate seat in Iowa eventually won by Joni Ernst. Clovis was the Iowa director for Rick Perry’s 2016 presidential bid before leaving that post in August 2015 to join the Trump team. Clovis is a graduate of the Air Force Academy, where he served as a fighter pilot in the 70th Fighter Squadron for 25 years, ultimately rising to the rank of Colonel. Clovis holds an M.B.A. from Golden Gate University and a Ph.D. in public administration from the University of Alabama. 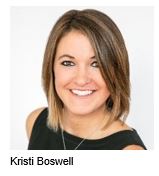 A former American Farm Bureau director of congressional relations, Boswell was an early hire to Perdue’s team, where she’ll work on farm labor issues for USDA. That was a key assignment for her former employer, and an AFBF coworker told Agri-Pulse that, while they were sad to see her go, “what better place for her to be?”

Before joining USDA and working for five years at AFBF, Boswell practiced corporate defense litigation and worked as a political aide for a Nebraska state senator. One of her first jobs was serving as the Ag Youth Coordinator for the Nebraska Department of Agriculture.

An environmental scientist and licensed attorney, Adcock attended the University of Tennessee, Knoxville as an undergraduate and later obtained her J.D. from the University of Kentucky College of Law. Shortly after graduation, she joined the Kentucky Farm Bureau as its director of natural resources. That work led to a job with the American Farm Bureau in Washington in 2002, where she handled environmental and regulatory issues for the nation’s largest farm group.

In 2008, she was selected as counsel to the Senate Committee on Environment and Public Works and two years later, joined CropLife America as senior director of government relations. She has previously served on EPA’s Pesticide Program Dialogue Committee and has chaired the Pesticide Policy Coalition.

Adcock is no stranger to the Trump agenda. She was active during the presidential campaign, serving on the Trump Agricultural Advisory Team and, in at least one debate that was organized by CropLife, served as a spokesperson for the campaign