WASHINGTON, May 24, 2017 - American egg farmers face more challenges than just building new chicken housing as they convert, as now projected, up to half of their 375 million laying hens from cages to open barns, called aviaries, or pastured-based systems of housing by 2025 or so.

Indeed, the move is on: All top 25 U.S. grocers and a majority of the largest 20 fast food chains are now trying to meet their public pledges toward marketing cage-free eggs, reports the Foundation for Food and Agriculture Research (FFAR), created in the 2014 farm bill.

However, aviary and outdoors hens will have to be bred, fed and/or managed differently than caged hens to keep them healthy and optimally productive, experts say. So, one of the first two grants to be offered in FFAR’s Accelerating Advances in Animal Welfare initiative will aim to help egg farmers with a wholesale shift in layer housing. 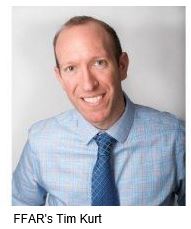 Specifically, research on keeping hens from fracturing their breast (keel) bones will be FFAR’s first focus of laying hen research, with proposals to be invited at the end of May. “The economic impact of keel bone fractures . . . is actually quite significant,” says Tim Kurt, who coordinates FFAR’s animal welfare research. He said that “birds with these fractures produce fewer eggs, with lower egg-quality scores and, what’s really important, they consume a lot more feed when they have fractures.” So, he said, the project might first focus on increasing bone strength through breeding, through new dietary formulations, for example, or on improving housing design to        reduce the chances of breast bone injuries.

The problem, says Cia Johnson, director of the American Veterinary Medical Association’s Animal Welfare Division, is that American layer breeds have been redesigned from their ancestors and “have increased wing loading; they have more weight per wing area,” so they can’t control their lifts or descents well. “We’re finding . . . that they get keel bone fractures as a result of failed landings (not landing on their feet).”

When hens just sit in cages or walk around in low-profile cages (called colonies), where they can’t lift off, they don’t have hard landings, she explained. But “birds will try to fly when they have the opportunity,” she said, and hens injure themselves when missing their landings, for example, or by flying into another flock. She noted a recent study of hens’ movements in aviaries, which found that “19 percent to 21 percent of hens’ landing were failed landings.”

Meanwhile, researchers with USDA’s Agricultural Research Service, in a 2016 study on “laying hen performance and well-being . . . in an aviary housing,” reported that “78 percent of laying hens had some issue with the keel bone.”

The vulnerability to breastbone fractures is not surprising, because hens bred for egg laying have lighter-framed breasts than broilers bred for meat production, said Hongwei Xin, director of the Egg Industry Center at Iowa State University. “There is not a whole lot of cushion around the keel bone” of most hens of those breeds, he said, since they are bred so that their “feed energy goes to egg production” and not for building large meaty breasts. He notes, too, that the frequency of keel bone breakage is determined in part by the hens’ disposition and how “excitable” they are. Strains that are flighty by nature have more collisions; thus, more fractures, he said.

Johnson and Xin points out that egg farmers face a host of hen health and welfare challenges beyond bone fractures when they open their caged hens to aviaries, and then more yet when they move to free range systems: predators, easier transmission of parasites and diseases, as well as food safety issues when, for example, the hens lay eggs on aviary floors rather than in nests. AVMA has a chart listing the animal welfare trade-offs between alternative chicken housing systems.

What’s more, U.S. farms have about 59 million hens that lay eggs to hatch chickens for meat (broilers), and those hens produce 8.8 billion broilers a year. The broilers are raised on one level in barns, where they don’t perch or fly.

But, broiler producers are also moving many flocks to outdoor pasturing systems, and their birds may have movement issues, too. Johnson points out that broilers “really don’t try to fly . . . They’re not trying to lift off.” Plus, broilers are bred to be proportionately large breasted, so “broilers are going to have some difficulty balancing (on a perch).”