WASHINGTON, May 24, 2017 - The Trump administration wants a complete picture of why the U.S. is running a $740 billion trade deficit in goods. That’s why the Commerce Department and the Office of the U.S. Trade Representative are working on a massive analysis, to be titled “Omnibus Report on Significant Trade Deficits,” and asking industry representatives to help.

The U.S. agriculture sector is mostly in agreement that farm-product exports are a bright spot in international trade, but groups like the National Biodiesel Board, the USA Rice Federation, the North American Wheat Growers Association and others are doing what they can to help point out difficulties with foreign markets.

Seven of the 39 people to testify at an all-day hearing held by Commerce last week represented farmers or farm products, but written testimony is also being filed.

“U.S. food and agriculture is one of the biggest success stories for U.S. trade, one that predates the nation’s founding,” the National Grain and Feed Association (NGFA) and North American Export Grain Association (NAEGA) said in a joint submission to Commerce and USTR. “Time and again over its rich history, U.S. agricultural producers and agribusinesses have ably demonstrated their ability to compete successfully in the global market for agricultural products ranging from raw commodities to value-added goods such as meat, dairy and biofuels.”

It’s a common sentiment in the agriculture sector, which commands an overall trade surplus, according to USDA data. The value of U.S. farm-product exports is now projected at $136 billion for fiscal 2017, compared to $114.5 billion in imports, according to the latest forecast from USDA’s Economic Research Service.

But there are problems. Global trade barriers that include everything from sanitary and phytosanitary restrictions on U.S. commodities to massive and sometimes complex domestic subsidies play a substantial role in constricting U.S. exports of wheat, corn, potatoes, soybeans, catfish, pork, shrimp and other products.

Anne Steckel, a vice president at the National Biodiesel Board, was one of the witnesses at the hearing last week. She called attention to a growing trade deficit created by Indonesia’s substantial domestic subsidies for the renewable fuel, much of which is made from soybean oil.

“Unfairly traded Indonesian imports account for a substantial proportion of imported biodiesel,” Steckel said. “Forced to compete with Indonesian producers’ dumped and subsidized prices, U.S. biodiesel producers’ financial condition has declined significantly. This has caused U.S. producers to pull back on investments to expand production capacity in what continues to be a growing market.”

While Indonesia is accused of doing significant damage to U.S. biodiesel producers and exporters, China is the center of most complaints.

The country continues to maintain substantial domestic price supports for wheat, corn and rice, distorting world markets and causing billions of dollars in losses every year for U.S. farmers and exporters. China’s subsidies – which the U.S. is challenging at the World Trade Organization – are particularly damaging to U.S. wheat farmers, who say they could be selling much more to the country if it didn’t promote overproduction. 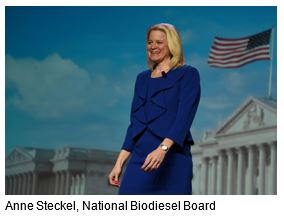 “China’s domestic support of rice prices has distorted the internal market, with prices well above world levels,” USA Rice said in a submission to Commerce and the USTR. “The result has been a surge of imports, such that China has emerged as a major rice importer, with imports of 4.8 million tons,” the group said. “U.S. exporters have been unable to take advantage of this demand because Chinese officials refuse to sign a phytosanitary protocol with the United States covering imports of milled rice, even though the protocol was agreed to by both sides in November 2015.”

The complaints against China go far beyond domestic subsidies, non-tariff barriers and the failure to fulfill WTO quotas.

China continues to refuse to overhaul its biotech approval process, causing massive delays in the U.S. commercialization of new seed traits and threatening U.S. exports of corn, soybeans and other commodities. In recently renewed trade talk, however, China agreed to finalize the approval of eight biotech traits that had been in regulatory limbo for years.

Vietnam is another target for trade complaints. The country heavily subsidizes its rice and catfish production, and U.S. producers say the impacts are devastating.

U.S. rice has been completely pushed out of Cuba due to the low prices offered by Vietnamese exporters, who are selling subsidized grain. And U.S. catfish farmers have seen their domestic market slashed as cheaper product from thousands of miles away floods the U.S. market.

“The U.S. catfish industry has been struggling in the U.S. market due to the unrelenting flood of unfairly low-priced Vietnamese imports,” Danny Walker, CEO of the Mississippi-based Heartland Catfish Co., told Commerce and USTR in testimony. “Those imports have crippled our industry.”

Reducing imports and creating jobs are among top goals expressed by the Trump administration, which continues to spotlight overall deficits with countries like China, Mexico, Germany and Japan.

Commerce Secretary Wilbur Ross said the Omnibus report – meant to “produce a comprehensive analysis of the economic realities and details of America’s trading partners” – will be completed no later than June 30.

But despite all the grievances the U.S. ag sector has with countries like China, the reality for U.S. farmers is that the U.S. exports more corn, soybeans, wheat, rice, beef, pork, sorghum, apples and potatoes than it imports.

“While we understand the need to examine the underlying causes of trade deficits to various sectors of the U.S. economy, it also remains essential that the United States continue to recognize the economic principle of comparative advantage and the benefits that two-way trade contribute to advancing U.S. and world economic well-being and global security,” the National Grain and Feed Association and the North American Export Grain Association said in testimony.