WASHINGTON, June 21, 2017 - No single factor is behind the decline in honey bee health, a leading researcher said at presentations in Washington, D.C., Monday, the start of the officially designated National Pollinator Week. 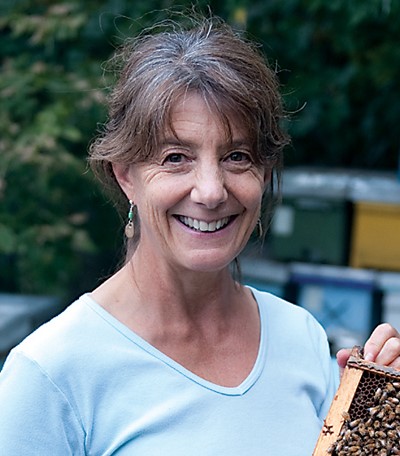 “I don’t think we’re going to find one driver,” said University of Minnesota entomologist Marla Spivak, who spoke as lead author of a commentary released the same day by the Council for Agricultural Science and Technology. She gave three presentations, including two on Capitol Hill.

Instead, she said the “four P’s” – parasites, pathogens, pesticides and poor nutrition – combine to compromise bee health or, in some cases, kill bees. Varroa mites spread viruses from hive to hive, pesticides can alter bee behavior in significant ways, and a lack of floral resources can leave bees less able to fight off the effects of the other stressors.

Beekeepers began “screaming bloody murder” in 2006 when they started losing colonies in large numbers, Spivak said, and while the latest colony survey by the Bee Informed Partnership showed annual losses of 33 percent, the second-lowest rate in seven years, that number is still well above what beekeepers consider acceptable.

The varroa mite, which Spivak called “a very obnoxious parasite,” feeds on the bees, reducing their body weight, including necessary proteins and carbohydrates. But “the most insidious thing about this pest,” she said, is that as it feeds on the bee, it picks up other viruses that were not causing problems and then transfers them to other bees.

Spivak said that when colony losses accelerated about 10 years ago, beekeepers “reluctantly” began treating their hives with miticides. Those who do not treat can increase the chances that colonies belonging to nearby beekeepers will become infected. But treatment can bring its own problems, Spivak said – residue in the wax comb and “secondary effects” on bee health.

She said it’s necessary to find ways to control mites without the use of synthetic compounds to which mites can become resistant. In the meantime, she said the Bee Informed Partnership – a collaborative effort of research labs and universities – has established tech transfer teams that will inspect hives for a fee and recommend ways to maintain bee health.

Pesticide exposure is a continuing problem for bees, Spivak said. “We’ve learned that on average, every load of pollen has five to six detectable pesticides in it,” she said. And while any bee that encounters an insecticide at a high enough level can die of acute toxicity, Spivak said “sublethal effects are incredibly important.”

Neonicotinoid insecticides, which are used in coatings on most corn and soybean seed, act systemically, moving through the plant tissue to the nectar and pollen. They “may persist in plant tissues or soil for long periods of time, in some cases more than a year, which violates the basic tenet of (Integrated Pest Management) and (Best Management Practices) regarding treating only when needed,” according to the commentary.

But they can also “unintentionally be released by farm equipment during planting and drift onto neighboring plants contaminating nectar, pollen, and water sources for foraging bees,” the commentary said. Bees exposed to neonics through contaminated pollen and nectar can exhibit “subtle behavioral and developmental impairments.” For instance said Spivak, they can “become disoriented and may not find their way home.”

Neonic manufacturers such as Syngenta and Bayer CropSciences are working to reduce “dust-off” of neonics during planting, which Spivak said “should be a relatively easy fix, I would hope.”

Neonics’ effects on bees have received the lion’s share of attention among all pesticides, Spivak said, noting that “many people think they are the major cause of bee death.” But she said that more research is needed on sublethal effects of “all classes of pesticides and fungicides.”

Herbicides have an indirect effect on bee health by killing off plants that provide floral sustenance, Spivak said. “Many of the weeds are flowering plants that bees really need and depend on for their nutrition,” she said, quoting beekeeper and co-author Browning, who said honey bees, wild bees and other pollinators are often “reduced to feeding on scraps.”

The importance of floral nutrition was driven home to Spivak by recent research showing that when bees feed on good nectar and pollen, they gain access to phytochemicals that help them fight off diseases and detoxify certain type of pesticides.

“Our greatest challenge going forward is how we protect our pollinators . . . and control our crop pests at the same time,” Spivak said, stressing that it is not an “either-or” proposition. Instead, a “rebalancing” needs to take place so bees can be protected next to corn and soybean fields, but also in apple orchards and almond groves.

But the recent run of high commodity prices and biofuel mandates has contributed to the loss of hundreds of thousands of Conservation Reserve Program acres in prime beekeeping territory such as the Northern Great Plains, the commentary said.

The conversion of grasslands to cropland “is having a severe impact on honey production,” Spivak said, and also eliminating many of the flowering plants that bees need.

Farmers need incentives through the farm bill to plant pollinator-attractive plants in marginal habitat, she said. “They’re happy to do it as long as they can do it on their own terms,” she noted, touting a seed mix from the Bee and Butterfly Habitat Fund.

“We are in the middle of this glorious pollinator revival, and people, because they’re paying attention to bees and monarch butterflies, they’re starting to realize they can help,” she said.

Spivak said about a third of the human diet, "if you eat lots of fruits and vegetables (as you should) is dependent on bee pollination." And the CAST commentary said that "pollination services contribute directly to the economy and food security," citing annual revenues of $11.7 billion from the sale of honey bee-pollinated fruit, vegetable, and nut crops in the United States. "The additional value of pollination services by the thousands of species of native bees that live in the wild throughout the (U.S.) is estimated at $3.4 billion annually, and the total economic value of pollination worldwide, by all bees, was estimated at $216 billion."