Trump reinforces support for (some) types of renewable energy

IOWA, June 28, 2017 - When President Donald Trump landed in Cedar Rapids, Iowa, last week, farmers and ethanol advocates were optimistic that he would once again mention his support for ethanol. After all, it was one of the most specific pledges he made on any topic during his 2016 presidential campaign.

With former Iowa Gov. Terry Branstad at his side, Trump once again delivered on his ethanol commitment.

“We will protect the corn-based ethanol and biofuels that power our country,” Trump said to the delight of renewable energy advocates in the room at Kirkwood Community College.

During a second stop downtown for a campaign rally, he mentioned ethanol once again.

Trump’s comments about wind energy, which is also widely popular and expanding in Iowa, were not nearly so kind. The president expressed concerns about the intermittent nature of wind energy.

“I don’t want to just hope the wind blows to light up your house and your factory as the birds fall to the ground,” Trump said, echoing previous concerns that he has discussed regarding wind energy.

Iowa Renewable Fuels Association (IRFA) Executive Director Monte Shaw applauded the President’s support for biofuels. He also called on the administration to take action by fighting against unfair and illegally subsidized imports in countries like China. 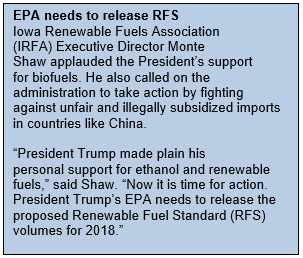 And when it came to solar energy, Trump harkened back to his campaign lines about building a wall along the southern border of the U.S., albeit with a different twist.

“We’re thinking about building the wall as a solar wall so it creates energy and pays for itself,” he said. “And this way, Mexico will have to pay much less money. And that’s good, right? ... Pretty good imagination, right? Good? My idea.”

It was a slightly different take on his previous comments about solar energy. During the campaign, Trump repeatedly described solar power as “very, very expensive” and “not working so good.”