BRAZIL, June 28, 2017 - It was an unprecedented move in 2013 when the U.S. and Brazil announced simultaneously that they were lifting their bans on each other’s beef. Critics were quick to warn back then that Brazilian standards weren’t up to the task and it turns out that they may have been right.

About a week ago, the USDA’s Food Safety and Inspection Service officially told Brazil that the agency was finding far too many safety violations to continue to allow imports from the country.

But about four years ago, USDA Under Secretary for Farm and Foreign Agricultural Services Michael Scuse was celebrating a historic deal with the Brazilians.

“Both Brazil and the United States maintain a strong commitment to science-based rulemaking,” Scuse said at the time. “USDA and (Brazil’s Ministry of Agriculture, Livestock, and Food Supply) recently agreed to a path forward to amend rules that currently limit bilateral beef trade. Bilateral trade of all beef and beef products could occur once each exporting country meets the importing country’s equivalence and technical requirements for animal health and food safety.”But about four years ago, USDA Under Secretary for Farm and Foreign Agricultural Services Michael Scuse was celebrating a historic deal with the Brazilians. 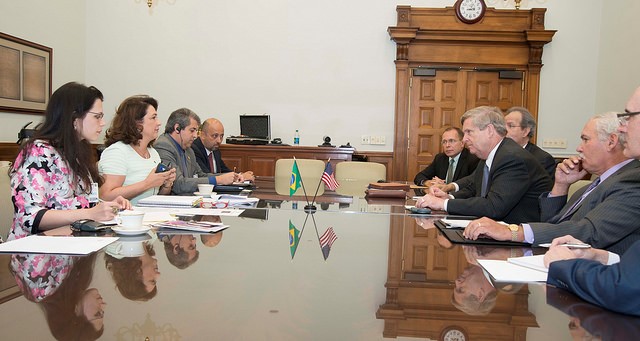 Jess Peterson, a spokesman for the U.S. Cattlemen’s Association (USCA), did not agree then and now he is struggling not to say “I told you so.”

“We’ve been battling this since day one,” Peterson said about imports of Brazilian beef.

Brazil is a major beef exporter and the largest supplier of China.

USCA back then was mostly concerned with Brazil’s struggle to contain foot and mouth disease (FMD), but the group was clear in its warning that the country wasn’t ready to be able to ship chilled or frozen beef to the U.S. The U.S. and Brazilian bans did not apply to pre-cooked beef, which are much less susceptible to health violations.

“USCA believes it important for USDA APHIS to take into consideration Brazil’s self-imposed label of developing country and analyze Brazil’s disease management plans with additional scrutiny,” the group told USDA in a 2010 letter.

Even after a corruption scandal rocked the Brazilian packing industry in March, the USDA ignored calls to put the ban back in place. Brazil’s federal police made arrests at several of the country’s largest packing plants because of allegations that food safety inspectors were being bribed to allow tainted product to be sold and exported.

Lawmakers called on the new Trump administration to ban Brazilian beef, but it didn’t happen.

Mike Young, acting deputy secretary and top USDA official at the time, said a ban was not needed and promised that none of the beef produced at facilities implicated in the scandal would make it into U.S. commerce.

“FSIS has strengthened the existing safeguards that protect the American food supply as a precaution and is monitoring the Brazilian government's investigation closely,” Young said in a March statement.

It was that strengthened monitoring – all shipments of Brazilian beef were inspected at the ports they arrived in – that allowed USDA to detect the extent of the problems with the product.

On Thursday, last week, the FSIS announced that it has blocked 11 percent of all Brazilian beef shipments – about 2 million pounds – since the agency began the increased inspection in March.

Brazil had tried to head off the full U.S. ban by voluntarily shutting off exports from five plants there that had been shipping tainted beef, but Rottenberg said that wasn’t enough. The problems, she said, indicated “a system-wide problem.”

Wenonah Hauter, executive director of Food & Water Watch, a nonprofit food safety watchdog group, is pleased the U.S. shut out Brazilian beef, but said it should have been done sooner.

“Three months after allegations surfaced that Brazilian meat exporters bribed inspectors to approve tainted beef for sale and export, USDA is finally halting meat shipments from Brazil,” she said. “The question is, why did it take so long?”

“With Brazil’s large market reopened to the United States, U.S. beef exports are poised for new growth,” USDA Secretary Sonny Perdue said recently. “I look forward to Brazilians getting the opportunity to eat delicious American beef, because once they taste it, they’ll want more of it.”