WASHINGTON, July 5, 2017 - House Agriculture Chairman Mike Conaway is expressing confidence that he can get a new farm bill enacted despite a potential cut to the Supplemental Nutrition Assistance Program. The size of the proposed cut has not been disclosed, but it has raised fears among farm bill watchers that singling out SNAP for reduction could fracture the urban-rural coalition that has traditionally been needed to pass farm bills.

“I would have preferred zero, but it’s not going to be zero,” Conaway, R-Texas, said of the SNAP reduction he has agreed to with Budget Chairwoman Diane Black, R-Tenn., during negotiations over the House’s fiscal 2018 budget resolution.

He declined to discuss the number, but he said in response to concerns about preserving the farm bill coalition that his committee will still have “the flexibility it needs to craft a farm bill that works for all of our various stakeholders.”

One major farm lobbyist said privately that cutting SNAP while leaving other farm bill spending alone would risk eroding support for the farm bill, a concern echoed by some in the nutrition community.  “It will make a crack in the coalition,” the lobbyist said. “So far, we've all stuck together – nutrition, ag, conservation, rural development -- but now it appears only one member of the coalition will be forced to take cuts.”

The concern extends to nutrition program advocates. “At a certain point, if SNAP is singled out for reconciliation instructions the coalition falls apart,” said Carrie Calvert, director of tax and commodity policy for Feeding America, the national association of food banks.

The budget resolution is critical to GOP plans to pass tax reform during this Congress. The resolution must be approved by both the House and Senate so that Republicans can use the budget reconciliation process to move a tax bill that will only need a simple majority vote to pass the Senate. A tax bill considered under regular order, rather than reconciliation, would require 60 votes to pass the Senate.

Negotiations over the budget resolution, however, bogged down in the House last week over demands by some conservatives to offset the cost of the tax cuts by making deep reductions in SNAP and other welfare programs.

Conaway, who was concerned that a big SNAP cut could jeopardize passage of a farm bill, came under fire from those conservatives for resisting their demands. Heritage Action Vice President Dan Holler slammed Conaway on June 28 for his “apparent unwillingness to cut a paltry amount of federal spending from his committee.”

Holler said Conaway’s stance was “a slap in the face to American taxpayers and jeopardizes historic tax reform.” Conaway reached a deal with Black the next day.

Heritage Action is the advocacy arm of the Heritage Foundation, a conservative think tank. Heritage and its allies in Congress, including leaders of the House Freedom Caucus, want lawmakers to add new work requirements to SNAP to push people off the program into jobs. They argue that too many able-bodied people without dependents (ABAWDs) are remaining unemployed and relying on federal assistance rather than getting training and looking for work. Defenders of the program say many ABAWDs can’t find work and some have undiagnosed mental illnesses despite being classified as “able-bodied.” 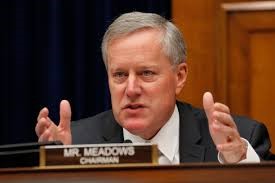 Freedom Caucus Chairman Mark Meadows, R-N.C., said Thursday that the White House supports the reform effort although it hasn’t gotten involved in negotiating the size of the spending cut. In explaining his position, Meadows said, “When I work I’ve had a greater sense of self-esteem than when I haven’t.”

Even with Conaway reaching a deal on SNAP, it still wasn’t clear that Republicans could reach agreement on the budget resolution. A group of moderate House Republicans known as the Tuesday Group warned in a June 30 letter to House Speaker Paul Ryan that the cut to mandatory spending programs that conservatives are demanding “is not practical and will make enacting tax reform even more difficult than it already will be.” The letter was signed by 20 lawmakers.

The chairman of the House Agriculture subcommittee that oversees SNAP, Glenn Thompson, R-Pa., said that a House-passed bill that he sponsored would provide a path for strengthening the work requirements while making it easier for SNAP beneficiaries to manage the transition to employment.

Thompson’s Strengthening Career and Technical Education for the 21st Century Act, which has bipartisan support, would overhaul an existing program to make it easier for states and local communities to apply for federal funding and give them more control over training programs to respond to regional employment needs.

The bill also is intended to ensure that employment training is more closely aligned with what local businesses need. The bill “creates access to more effective job training,” Thompson said.

Conaway said he still plans to begin moving a new farm bill before the end of this year or early in 2018.