CALIFORNIA, July 5, 2017 - Cogeneration is a common-sense idea of recycling the heat produced in electrical functions to produce more power. While the concept is easily grasped, putting it into practice is anything but elementary. However, a California engineering company has ironed out the logistics and is providing the technology to large-scale farms.

Brian Curtis founded Concentric Power in 2011, marrying his mechanical knowledge with his heritage in the so-called “Lettuce Bowl” of Salinas Valley, California, which produces 85 percent of the fresh vegetables in the United States.

“The energy business is a trillion-dollar business. And the food industry, everyone needs to eat. We just see those as two critical industries,” Curtis, Concentric’s CEO, told Agri-Pulse. “My personal background is engineering. I thought I could add value.”

Concentric holds patents on the software controls that make cogeneration happen, including complex logarithms. The company flexed its muscle last week, introducing its newest Clean Power Station at the 2017 Forbes AgTech Summit in the city of Salinas. The high-efficiency energy modules are designed for onsite electric power generation and low temperature refrigeration, a design that is already in use at True Leaf Farms, a large-scale vegetable operation. True Leaf Farms’ Clean Power Station includes a 2.0 megawatt electric generator, a high-efficiency internal combustion engine, and a 250-ton refrigeration module providing cooling to 18 degrees Fahrenheit.

“Their business is basically cooling fresh vegetables,” Curtis said. “We provide electric power for their facility and we also provide some level of their refrigeration. We do that using the waste heat from the power generation. We put that to work to drive the refrigeration,”

Optimizing energy efficiency, cogeneration reduces both greenhouse gas emissions and energy costs by more than 25 percent. Concentric innovatively uses the existing refrigeration systems and effectively captures heat that would otherwise be lost during the production of electricity. Curtis hopes that the modules will help the agricultural sector meet the skyrocketing demand for food. 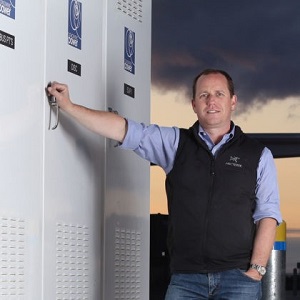 “By 2050 the planet will need to grow 70 percent more food than it did in 2009. With this incredible high demand and growth, the need for better sustainable, efficient and independent energy infrastructure in the agricultural sector will be critical,” said Curtis. “Our whole mission is to be able to really move the needle on global sustainability issues and being able to actually make an impact on climate change. This works and the economics are great. If we as an industry rally around it, we can make a big difference.”

Concentric Power, based in Campbell, California, was founded in 2011 to produce high-efficiency energy modules. The company is an inaugural member of the Western Growers Center for Innovation and Technology.