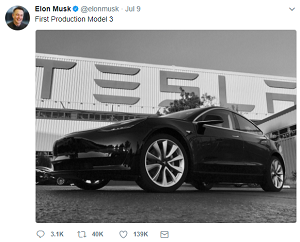 CALIFORNIA & NEW JERSEY, July 12, 2017 - Two major car companies announced big breakthroughs for the future of electric cars this past week. First, Tesla CEO Elon Musk revealed that the company was ready to start rolling out its latest, more affordable car. Then Volvo responded, announcing that all of their cars would be electric.

“Model 3 passed all regulatory requirements for production two weeks ahead of schedule,” Musk tweeted on July 3.

Orders for Model 3, the fourth version in Tesla’s line, had already reached 325,000 on April 7, 2016, just a week after the company began taking reservations. Musk projects the manufacturer would be able to bring production up to 20,000 cars monthly by the end of the year, which is half of Tesla’s 2018 monthly goal. At $35,000, Model 3 is nearly half the price of the 2017 Model S, which goes for $68,000, according to Car and Driver. The new offering also promises superior safety, speed, and a longer distance per charge.

“The Model 3 will not just be five-star on average. It will be five-star in every category. Even the base Model 3 will do zero to 60 miles an hour in less than 6 seconds,” Musk said during the Model 3 introduction. “In terms of range, the range will be at least the EPA rating of 215 miles. These are minimum numbers. We hope to exceed them.”

While Tesla busies itself with filling orders, Volvo is putting into motion its plan to go all electric. The company announced its mission for 2019 to offer consumers a choice of any electrified vehicle.

“This is about the customer,” said Hakan Samuelsson, Volvo president and chief executive. “People increasingly demand electrified cars and we want to respond to our customers’ current and future needs. You can now pick and choose whichever electrified Volvo you wish.”

Five fully electric cars will be introduced between 2019 and 2021, three of them from the Volvo line and the other two from the company’s Polestar line. All of them are to be supplemented with petrol and diesel plug-in hybrid and mild hybrid 48-volt options. The company’s intent is to phase out cars powered only by a combustion engine. 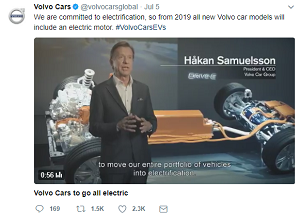 “This announcement marks the end of the solely combustion engine-powered car,” said Samuelsson. “Volvo Cars has stated that it plans to have sold a total of 1 million electrified cars by 2025. When we said it, we meant it. This is how we are going to do it.”

While Volvo’s current offerings are generally hybrids, Tesla, which does not work with combustion engines at all, is working on infrastructure, vowing to double charging stations over the coming year.