Following the subcommittee’s approval of a spending bill for fiscal 2018 that largely rejects cuts proposed by the Trump administration, Ag Appropriations subcommittee Chairman John Hoeven, R-N.D., said a bipartisan “manager’s amendment” would be offered to the spending bill when it is considered by the full committee on Thursday.

Hoeven said there is “a strong feeling on the committee that (the under secretary position) provides an emphasis on rural development that we want to see.” In a reorganization announced in May, Perdue said he was creating a new under secretary for trade position as authorized in the 2014 farm bill, but was getting rid of the rural development post. Instead, he named Anne Hazlett assistant to the secretary for rural development. Farm-state senators such as Hoeven and Senate Agriculture Committee ranking member Debbie Stabenow, D-Mich., criticized the realignment. 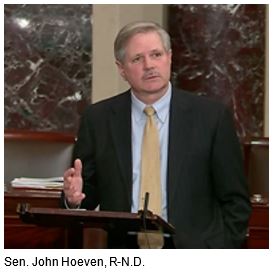 Hoeven said the amendment is not a knock on Perdue – “We have great confidence in him” – but that “particularly now when ag’s in a tough spot,” it’s important to show support for the programs and agencies in USDA Rural Development.

In the spending part of the bill, which funds USDA, the Food and Drug Administration, and the Commodity Futures Trading Commission, the subcommittee approved $145.4 billion in discretionary and mandatory funding, $4.85 billion above the administration’s request and $7.9 billion below the FY2017 enacted level.

Total discretionary spending in the bill is $20.525 billion, $352 million below the FY2017 enacted level and $525 million more than the House bill, which cleared the House Appropriations Committee last week.

The Senate bill provides $1.6 billion for Food for Peace grants, “which support the delivery of American-grown food to foreign countries experiencing chronic hunger crises,” the committee said in a news release. (The House bill provides $1.4 billion.) The McGovern-Dole International Food for Education and Child Nutrition Program would receive $206.62 million, about $21.5 million more than the House bill.

The bill funds other areas as follows:

--Natural Resources Conservation Service – $874.1 million, $9.6 million above the FY2017 enacted level and $108.1 million over the budget request. The bill includes $150 million for the Watershed and Flood Prevention Operations program to support investments in rural communities.

--Food and Drug Administration (FDA) – $2.8 billion in discretionary funding for the FDA, $1 million over the FY2017 enacted level.  Overall, total FDA funding, including user fee revenues, is $5.2 billion, which is $491 million above FY2017. The bill does not support new user fees or the associated cuts to budget authority as proposed in the budget request. Food safety activities are fully supported, and the bill provides $60 million as authorized in the 21st Century Cures Act.