WASHINGTON, July 26, 2017 - A financing program long touted as a simple way to add commercial and home solar and energy efficiency systems with no upfront costs has taken some criticism in recent months, including in Congress where a group of lawmakers is seeking additional regulatory legislation for the initiative.

Property-Assessed Clean Energy (PACE) financing, which Scientific American identifies as one of the top 20 “ways to build a cleaner, healthier, smarter world,” is a program under which funding is provided to property owners by private sector investors for renewable energy, energy efficiency or water conservation measures. That money is repaid by each participating home or business owner as a charge on their property tax bill. PACE is completely voluntary and only affects property owners who choose to participate.

Last year, the Obama administration took steps to scale-up PACE, seeing it as another tool in its “Clean Energy Savings for All Initiative” that aimed to accelerate efforts to reduce greenhouse gas emissions, increase grid resiliency and save consumers money, particularly in the residential sector.

The program originated in California more than a decade ago. Since then, PACE-enabling legislation has been passed in 30 states and the District of Columbia, most recently in Illinois, allowing local governments to establish their own PACE financing programs. But most of those states restrict PACE funding to commercial properties. Only three states currently provide for residential upgrade financing: California, Florida and Missouri.

Securing residential mortgage insurance on PACE properties had for years been nearly impossible because of restrictions on covering property with any mortgage liens other than those held by mortgage lenders. The fear has been that because PACE financing places a lien on the property, those liens could have first repayment priority in case of foreclosure, likely costing taxpayers’ money. The lack of federally-backed mortgage insurance has severely stifled the growth of PACE financing.

While many states have tried to overcome the roadblocks set up by federal insurers, California has proven to be the most successful, setting up a $10-million fund in 2013 that would cover any losses sustained by lenders to properties with PACE liens. However, the surge in foreclosures that federal officials feared would occur with PACE properties never happened. The California fund has not been touched.

To make the program viable for residential properties in more states, last year the Federal Housing Administration (FHA) and the Department of Veterans Affairs – working within the White House’s climate change efforts – changed their rules to authorize PACE financing for emission-reducing solutions like home efficiency improvements or no-carbon solar power. The agencies now back home mortgages for PACE properties, determining that mortgage lenders will retain top repayment priority in the event of a foreclosure. Furthermore, the agencies’ guidance also allows PACE assessments to transfer from one property owner to the next, including those who obtain the property through a foreclosure sale.

However, federal acceptance of PACE financing did not extend entirely across the board. The Federal Housing Finance Agency (FHFA), which guarantees many home mortgages through Fannie Mae and Freddie Mac, still holds to the argument that a PACE lender would have first claim in the event of a foreclosure and the agency won’t back a mortgage on PACE properties.

The FHFA resistance reflects criticism generated by a coalition of housing-related trade groups – the Mortgage Bankers Association, the American Bankers Association and the National Association of Realtors. In a letter to the FHA, the groups criticized the agency’s decision to insure mortgages that carried liens created under the PACE retrofit programs.

The coalition insisted that certain conditions could result in delinquent PACE loan amounts retaining a first lien position, stating in its letter, “Allowing any PACE loan amount to hold a senior priority undermines the lender’s (and the government’s) collateral position and disrupts the very nature of secured lending.”

The housing groups also object to the treatment of PACE financing repayments as a tax assessment rather than a loan repayment. They contend that PACE assessments should have the same disclosures and documentation required for mortgage loans, including federal Consumer Financial Protection Bureau disclosures and protections such as new “Know Before You Owe” disclosures, right of rescission protections or the “Ability to Repay” requirement.

PACE financing doesn’t meet those requirements because it “has been conveniently classified as a tax assessment rather than a loan,” the coalition’s letter to FHA states. “However, a PACE loan is still a financial obligation that can negatively affect one’s mortgage repayment ability. Borrowers may not fully understand the consequences of assuming an increased financial obligation on their tax bill.”

The traditional lending groups also have used a recent rash of “scams” in California and Florida, where particularly vulnerable homeowners have been conned by unethical contractors, to attack PACE financing in Congress and at the local level.

In most cases, the victims are elderly or low-income homeowners who have been offered solar panels, a new water heater or new energy efficient windows by fraudulent operators claiming the upgrades are part of a government-sponsored program. They imply the retrofits are free, but fail to tell the homeowner that the work is being done through PACE financing and they will be subject to higher tax bills.

Citing what they call “predatory lending” practices, the coalition of lending groups was successful this spring in getting Sens. Tom Cotton and John Boozman, both Arkansas Republicans, and Marco Rubio, R-Fla., as well as California Reps. Brad Sherman, a Democrat, and Ed Royce, a Republican, to introduce companion bills that would bring PACE financing under the Truth in Lending Act, applying the same disclosure requirements to the funding as that covering traditional loans. 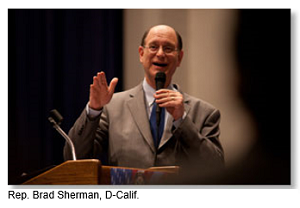 Sherman lauded PACE programs for providing an important source of financing for consumers looking to make upgrades to their home, but said “the current process presents homeowners with many challenges and can result in homeowners being misled about the terms of their loan.” He said the legislation would make PACE lenders subject to the “same basic disclosure requirements that apply to traditional lenders, including providing to consumers the annual percentage rate, a schedule of payments and the total cost of a loan.”

At the local level, officials in two cities in California – the latest being Bakersfield – have voted to close their PACE financing programs, citing the fraud potential and heeding complaints from real estate agents that the initiative makes home sales more complicated. But local PACE advocates allege the negative votes stem from exaggerated claims made by local real estate agents and that, despite the two votes, PACE programs are expanding in other municipalities in the state.

Of the bills pending in Congress, David Gabrielson, executive director of PACENation, says that “under the guise of consumer protections, and at the behest of the banking lobby, this bill would kill PACE.” He says California has most of the specific protections cited in the federal legislation, and says that Washington should provide legal safeties nationwide.

But, Gabrielson says, the bills offered by Cotton, Boozman, Sherman and the others would require local governments to alter the way they collect property taxes and assessments, and require them – as well as contractors – to become licensed as mortgage brokers. Gabrielson also contends the measures would impose what could be lengthy delays in funding projects.

“Municipalities and contractors will not, and likely cannot, comply with these requirements,” he says “As a result, PACE programs will find it nearly impossible to operate,” killing the initiative and protecting market share for mortgage bankers.

The PACE share has the potential to be quite big. Renovate America, the nation’s largest PACE lender, says that as of last year, California has seen more than 66,000 homeowners make more than $1.5 billion in efficiency improvements through PACE financing since 2012, creating more than 13,500 local jobs and generating more than $2.7 billion in local economic activity.