WASHINGTON, August 2, 2017 - Wind power projects in the second quarter were up 40 percent from the same period in 2016, according to data released by the American Wind Energy Association (AWEA).

Across the country, 29 wind projects either began construction or entered advanced development in the April-through June quarter, totaling nearly 26,000 megawatts (MW) when completed.  In the year-earlier period, just over 18,000 MW was under construction.

The bulk of current wind turbine construction and advanced development activity was in Texas, the Midwest, and the Mountain West, where wind resources are plentiful. Other highlights in the second quarter include six major commercial and industrial customers buying U.S. wind power for the first time, including Apple and General Mills, and two offshore wind projects being awarded Maryland offshore renewable energy credits (ORECs), a key step in their development.

“The path to unlocking America’s full energy potential is clear with another strong jump in the number of wind projects moving forward,” said Tom Kiernan, CEO of AWEA. “Wind energy makes our power system more reliable and resilient and protects consumers by diversifying our energy mix. The wind industry is propelling American energy production, manufacturing, and job creation into the 21st century.”

She noted that in July, President Trump signed an executive order establishing a Presidential Advisory Council on Infrastructure.

“The Council is tasked with studying and recommending ways the federal government can advance infrastructure, and it recognizes both renewable energy generation and electricity transmission,” she said. “Transmission plays a critical role in delivering benefits from wind energy and all forms of American energy. The administration’s strategic focus on boosting America’s critical infrastructure will mean more opportunity for energy growth,” she said.

During the quarter, strong wind power development continued in rural America, where wind has become a major source of new investment and jobs in many communities.

Kansas just became the fifth state to surpass 5,000 MW of installed wind power capacity, as the largest U.S. wind project installed this quarter added 178 MW in the state. Kansas now has enough wind power capacity to supply 1.5 million average homes, supporting nearly 6,000 jobs, and making lease payments of up to $15 million a year to its farmers and ranchers. Gov. Sam Brownback said it was a goal he set when he took office in 2011. 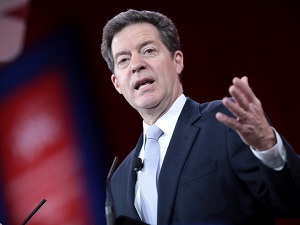 “I wanted Kansas to also be known as the Renewables State. Fast forward six years, and Kansas has made major strides to achieving that lofty goal. Today, Kansas can officially say it has joined the ‘5,000 Megawatt Club’ a distinction only four other states have achieved,” Brownback said.

“But, we don’t intend to stop,” he continued. “A year ago, I announced another goal for Kansas – to be powered 50 percent by renewable energy by January 2019 – one of the most aggressive renewable energy policies in the country. Here’s to the next 5,000 megawatts of wind energy capacity in Kansas and the jobs, businesses and private capital it brings to all parts of our great state.”

And Massachusetts, in partnership with local electric distribution companies, issued a request for proposals for between 400 MW and 800 MW of offshore wind power.

These companies join recent purchasers General Motors, Procter & Gamble, and many others who are buying wind because it’s good for their bottom line, locking in clean energy at a stable price for many years into the future, AWEA said.

Nationally, the U.S. now has 84,405 MW of installed wind power capacity, with more than 52,000 commercial wind turbines currently operating in 41 states plus Guam and Puerto Rico.

AWEA will celebrate the rapid growth of the industry and its benefits to rural America with its first-ever “American Wind Week,” Aug. 6-12, featuring tours of wind farms and factories and other opportunities to learn more about wind power. The week’s festivities will be capped with a community fair at noon on Saturday, Aug. 12 in the town square in Fowler, Indiana, population 2,300, whose economy has been transformed by the business from several nearby wind farms.