“Most order delays are lasting 11 days or more, putting perishable goods waiting for shipment at risk of rot and grain mills or livestock operations reliant on a steady stream of raw materials and feed in limbo,” the AFBF analysis says. Most of the unfilled grain orders were concentrated in the Upper Midwest and central Plains. 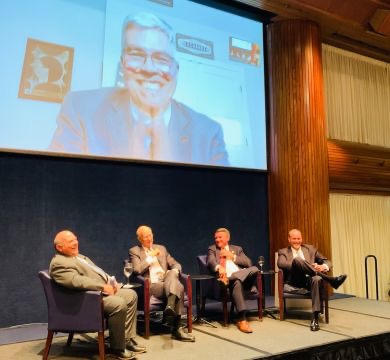 Dale Moore beams on a screen at his retirement bash. Seated on stage are American Farm Bureau Federation President Zippy Duvall, former Sen. Pat Roberts, National Council of Farmer Cooperatives President/CEO Chuck Conner, and President of The Russell Group, Randy Russell. Moore, who is retiring as Executive Vice President of AFBF, could not attend because of illness.

A certified organic farmer in Minnesota who sold non-GMO grains labeled as organic has been indicted for defrauding grain buyers, the Justice Department announced Monday.

James Clayton Wolf of Cottonwood County “repeatedly purchased non-organic corn and soybeans from a grain seller and resold the grain as organic product,” the U.S. Attorney’s Office in Minnesota said in a news release. “As part of his scheme, Wolf also grew conventionally farmed crops using chemical fertilizers and pesticides, in violation of organic farming standards.”

Wolf received more than $46 million in payments from grain buyers between 2004 and 2010, the USAO said. He was charged with three counts of wire fraud.

The Environmental Protection Agency is seeking comments on a petition to revoke tolerances and cancel registrations for food uses for organophosphate pesticides that risk assessments find to be unsafe.

Among the 15 OPs on which the petition seeks action are acephate, diazinon, malathion and phosmet. The comment deadline is Aug. 11.

Russian retreat from island a boost to Ukraine grain exports

Russia’s retreat from Zmiinyi Island – known commonly as Snake Island – off the coast of Ukraine, together with the restoration of shipping infrastructure on the Danube River, is expected to give a boost to Ukrainian grain exports, according to the country’s agriculture ministry.

The island is off the coast and just north of the Sulina branch of the Danube River. It’s the final length of the river that Ukrainians have been sending barges full of grain down to be loaded into ships on the Black Sea.

Martin Griffiths, the United Nations Under-Secretary-General for Humanitarian Affairs, says he is encouraged by the developments, but stressed it won’t be enough to alleviate the problems caused by the Russian blockade that has shut down most Ukrainian exports through Odesa.

The group, which represents over 4,000 wheat producers, said the draft report released by Murray and Inslee last month “significantly underestimates the impact dam breaching would have on farm families across Washington.” They argue it ignores rising input costs, the impacts of last year’s drought and volatile markets stemming from the current war in Ukraine.

Take note: The public comment period for Inslee and Murray’s draft report closes today, bringing the duo one step closer to announcing their proposal for reviving salmon populations. Neither has officially taken a position on dam breaching.

California Rep. John Garamendi is predicting that more than 22,000 West Coast port workers and operators should reach an agreement soon on a new contract

In remarks Monday at the Agri-Pulse Food and Ag Policy Summit West, Garamendi, a Democrat, said he’s spoken with both sides recently and is optimistic about the talks.

“While the current contract has expired, both sides stated that they believe that they will have a contract in short order and there will be a contract that will increase the efficiency of the port,” said Garamendi.
The representative’s northern California district stretches from Sacramento to the westernmost reaches of the San Francisco Bay Area.

Senegal has adopted a new set of laws regulating biotechnology that are expected to allow the technology to flourish in the West African nation, according to a new report from USDA’s Foreign Agricultural Service.

The government is currently consolidating 18 separate implementing decrees for the law that “will enable Senegal to comply with its international commitments and take the maximum benefit from the advantages offered by modern biotechnology.”

The 2022 law, unlike its predecessor in 2009, sets up paths to “allow the entry, research, and commercialization” of genetically engineered products, says FAS.

The African Union Development Agency announced support for the law, saying Senegal would “be able to operationalize its biosafety framework and safely harness modern biotechnologies for its development.”

He said it: “As food security mounts around the world, opening the Black Sea route is our best bet to mitigate global hunger. The world can’t wait.” – Martin Griffiths, the United Nations Under-Secretary-General for Humanitarian Affairs.