The latest evidence of this transformation is a partnership announced last week by ag co-op Co-Alliance, which is headquartered in Indiana, and Indoor Farms of America.

Growing plants intensively with little or no soil has a long tradition which some say dates back to the Hanging Gardens of Babylon and includes 20th century hydroponics (growing plants in water). The most recent addition is aeroponics (growing high-density crops under LED lighting in a data-based, precisely calibrated nutrient mist).

This latest development linking CEA with the traditional farm sector is supported by Indoor Farms’ commitment to make it possible and profitable for traditional farm operators of all sizes to “Farm anywhere you are. All Year. Every Year.”

“We want to have traditional agriculture embrace the new technologies to supplement their existing operations and thereby create year-around income for the family farm and not just seven or eight or nine months’ worth,” says Indoor Farms CEO Dave Martin.

With a traditional Midwest ag background himself, Martin explains that “When the fields are frozen or it’s too cold and you’re shut down from October to April in many cases, the income doesn’t need to stop. These famers already have the existing pathways to market as well as knowledge of how to grow plants.” 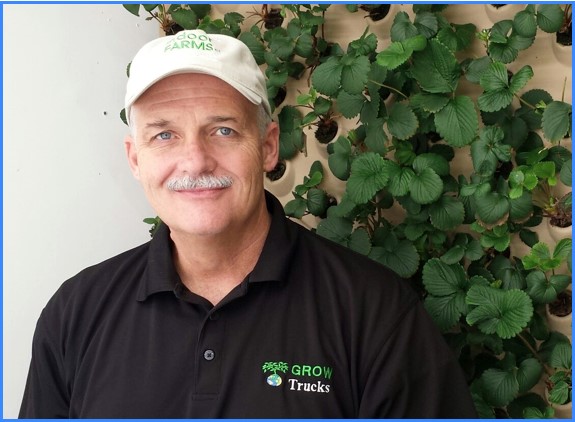 Martin points out that traditional ag has tended to see indoor farming as a competitive threat. So he considers it a major breakthrough that last week Co-Alliance bought Indoor Farms’ equipment for two large “warehouse style” indoor farms in Indiana.

Co-Alliance Business Development Manager Darren Radde explains that “Co-Alliance has been investigating several companies and the equipment available for the indoor agriculture space for some time. Our team understands quality equipment, and after reviewing numerous growing platforms, we believe the equipment developed and manufactured by Indoor Farms of America will provide our farmer members with a viable means of supplementing their income, allowing them to farm new crops all year long, and be within 30 minutes to two hours delivery time to any major market they can serve from their existing farm.” He says the two new indoor farms should be up and running in the fall.

Martin says “Co-Alliance is a perfect partner for us in terms of demonstrating to traditional farming that our technology creates the best opportunity for farmers to actually make money.”

Martin also notes that enough of the farm sector is seeing the opportunity that after 2016’s “very good sales for our first year,” Indoor Farms matched its 2016 sales in the first four months this year and “now, two months later, we’ve more than doubled that.”

Indoor Farms of America says,  “Our equipment will mean higher yields, lower investment costs, lower labor costs, and better ROI (return on investment): Indoor Agriculture Equipment designed for now and 30 years from now – easy to operate, with the ability to grow multiple crops in one device, and in one farm.”

Martin is confident his company’s hyper growth will continue because its partnership with Co-Alliance is proving the concept of working with traditional ag. He adds that the key is aeroponics, “A superior means of growing a plant” that he says enables farmers to produce the healthiest possible crops by fine-tuning everything a plant needs from light, water, and nutrients to heat or cooling.

Alberta, Canada-farmer Wayne Lohr is another aeroponics fan. After experimenting over the past year with Indoor Farms equipment on a small scale, this week Lohr is going big – planting 8,000 strawberry plants in his farm’s 15,000 square foot equestrian facility converted to house a commercial-scale aeroponic farm.

With his past experience raising beef cattle, grains and oilseeds, Lohr tells Agri-Pulse that anyone with a farming background can do well with indoor farming, but that “the key thing is marketing. You’ve got to have a market for this before you start.” Having a signed contract with a major retailer for his strawberries and lettuce, Lohr looks forward to making steady sales year-around.

Lohr says aeroponics empowers rural as well as urban areas to benefit from “local production on a small scale that will satisfy the local needs, year-around. You don’t need to be trucking this produce all over the country.” Even better for a Canadian farmer, he adds, “We don’t care whether it’s 40 below outdoors, or 40 above.”

The promise of CEA has attracted major investors with the prospect that sales of high-yield indoor-grown produce could skyrocket from an estimated $1 billion in 2015 to over $11 billion by 2025. In a January report, Vertical Farming Market . . . Global Forecast to 2022, MarketsandMarkets forecast that the vertical farming market is expected to grow by almost 25 percent from 2016 to reach $5.8 billion by 2022.

A similar report from Stratistics MRC put the global vertical farming market in 2015 at $1.15 billion and said it was “poised to reach $6.31 billion by 2022,” moving at a combined annual growth rate of 27.5 percent.” Stratistics expects this rapid growth to result from “increasing inclination towards healthy food without pesticides, rising urban population, and no weather related crop failures.”

Forecasts from Research and Markets in August 2016 echoed the other reports’ figures but added that although hydroponics currently dominates the market, “the maximum growth is expected to be made in aeroponic techniques.”

Counting on this market growing by more than 25 percent per year, this July investors including Amazon’s Jeff Bezos and Google’s Eric Schmidt provided $200 million in venture funding to the fledgling indoor-farming company Plenty.

San Francisco-based Plenty’s own commitment is that it will “build our farms next to where people live, so our produce is grown a short drive from your local store” and will grow its crops “without harmful pesticides or herbicides.”

Still, delivering on the promise of locally grown, pesticide-free produce isn’t easy. In its first 20 years, the vertical farming industry has racked up a string of expensive failures. Unable to lower their costs enough to compete, indoor farming startups that have shut down include Atlanta’s Podponics, Chicago’s FarmedHere, and Vancouver’s LocalGarden.

Those failures are no surprise to Indoor Farms’ Martin or to his Canadian customer Lohr. Both say that to make it in vertical farming it takes much more than re-purposing an abandoned urban warehouse and hiring computer savvy technicians to juggle complex plant-pleasing algorithms.

Dave Martin says many of the failures stemmed from “pie-in-the sky ROI dreams” and using “old technology, stacking trays vertically 30 feet high in warehouses that were too expensive, using electricity that was too expensive.” He says one answer is to “locate your indoor farm next to a co-gen plant” or other source of low-cost energy for heating, cooling, and lighting. Another, says Lohr, is to have a solid background in actually growing field crops.

(CLARIFICATION: The original photograph that appeared at the top of this story on our website may have given the impression that the equipment shown in the photo was produced by Indoor Farms of America. That was not the case and Agri-Pulse apologizes for any confusion.)