SACRAMENTO, August 9, 2017 - The countdown has begun for the trial of California nursery owner John Duarte, who faces millions of dollars in fines and mitigation costs in a Clean Water Act prosecution that has become somewhat of a cause célèbre in the agricultural community.

U.S. District Judge Kimberly Mueller has scheduled trial to begin in Sacramento on Friday, Aug. 15, but efforts are still being made to get the Justice Department to drop the case.

“There’s lots being done behind the scenes to try to stop the persecution and the prosecution,” said Gary Baise, a lawyer at OFW Law in Washington, D.C., who is on Duarte’s legal team. Sen. Chuck Grassley, R-Iowa, met with EPA Administrator Scott Pruitt in Des Moines yesterday, and Agriculture Secretary Sonny Perdue said on a conference call with reporters on Monday that he also planned to meet with Pruitt and Attorney General Jeff Sessions.

Grassley told Agri-Pulse he gave Pruitt a two-page briefing paper expressing his views and declined to discuss the matter further, pointing out that as a U.S. senator he could not interfere with an ongoing court case.

Perdue said he had thought there had been a “reconciliation” in the case “but it appears that it’s going forward.” He said he was “hoping the Justice Department could see fit to hold off” until EPA finishes its rewrite of the “waters of the U.S.” rule.

EPA recently proposed to withdraw the Obama-era rule, long a target of most of the farming community, which has claimed that it vastly – and illegally – expands the government’s jurisdiction.

“This appears to be from what I can tell very normal farming practices, and I think it would send a huge chill over American agriculture if we have farmers facing criminal charges and civil charges over normal agricultural practice,” Perdue said.

The issue of whether the plowing (or, as the government alleges, ripping) constituted an ongoing farming activity has already been decided by Judge Mueller, who ruled over a year ago that Duarte’s actions – even while not performed by him personally but by a business associate – violated the Clean Water Act.

“The court is not persuaded that, after nearly twenty-four years of no activity that meets the applicable definition of farming, the tillage and planting of wheat by plaintiffs can be considered a continuation of established and ongoing farming activities,” she said in her June 10, 2016, opinion.

She also found, based on aerial photos, that there was a “substantial amount of wetlands impacted by the tillage and planting activities” and that those wetlands had a “significant nexus” to the Sacramento River. The upcoming trial is being held to determine the penalties Duarte will be required to pay and the mitigation he will have to perform.

The activities at issue in the case took place in 2012, when “Duarte hired a contractor to conduct what they agreed were ‘ripping’ operations . . . not mere plowing,” as specified in the invoice for the work, the government said in its pretrial brief.

“They ripped in wetlands and in swales with standing water,” the Justice Department said in the brief. “They ripped in flowing streams and in running creeks. They drove the ripping equipment down into streams and ripped them lengthwise. They did all this despite a warning from Duarte’s own environmental consultant that they would be subject to ‘significant penalties’ unless they first obtained a permit from the Army Corps of Engineers.” 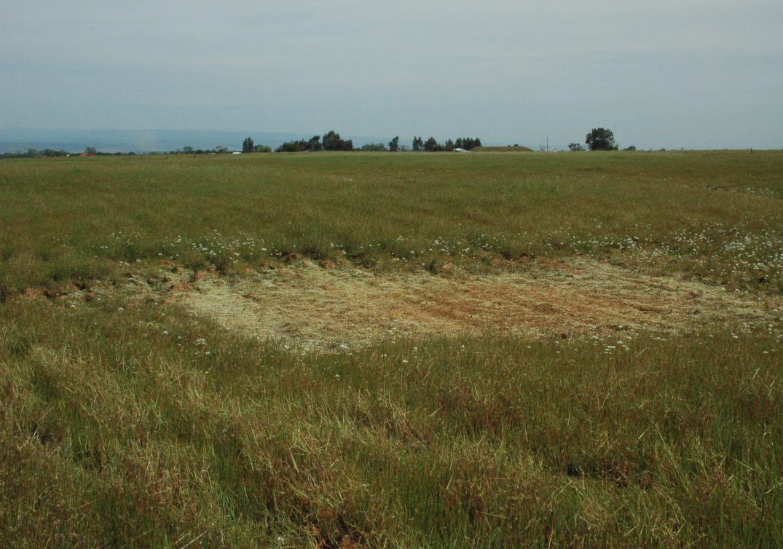 Shallow tillage at Duarte property, with wetlands in full bloom

Countering that argument, Duarte’s attorneys assert in their client’s trial brief that the real story involves an overzealous Corps regulator who happened by the property and falsely accused Duarte of tilling three feet deep and damaging vernal pools. Instead, Duarte’s lawyers contend that only “shallow tillage” was conducted at the site and there was no damage to vernal pools.

“All Duarte has to show for this case is a still-empty field in Tehama County, a wheat crop that moldered into the ground, and millions of dollars in fees to lawyers and experts retained to defend against the Corps’ efforts to extract ruinous penalties for merely shallowly tilling a previously tilled field to plant wheat,” the brief says.

Prows said settlement discussions are continuing but could not provide any details. He said he is confident that the judge will agree that the Corps failed to show it has “subject matter jurisdiction” in the case and dismiss it, as requested by Duarte on July 23.

Duarte’s attorneys contend that because the case involves an “unpermitted discharge,” the Clean Water Act requires that EPA, and not the Corps, was the proper agency to pursue any claims against Duarte. In its response to Duarte’s motion to dismiss the case, the Justice Department shot back that the jurisdictional argument is simply Duarte’s attempt to “stave off the inevitable” and avoid trial.

Duarte says on his GoFundMe page that his legal fees are $1.5 million and growing. (The page says he has raised close to $34,000.) At a recent House Agriculture Committee “listening session” in Modesto, Calif., he said he was being sued “for planting wheat in a wheat field,” and that the next farm bill needs to include “right to farm” protections.

Judge Mueller, however, said in her pretrial order that the parties “have not had any meaningful settlement negotiations.” She laid out a series of disputed factual issues to be resolved, including: