DECATUR, Ill., Aug. 30, 2017 – A House Agriculture Committee farm bill listening session in the heart of the Corn Belt had its fair share of talk about protecting crop insurance, but speakers also urged support for USDA conservation and nutrition programs.

Six members of the House Agriculture Committee heard from stakeholders at the session near the Farm Progress Show in Decatur, Illinois. Speakers hit heavily on their desire to see support for programs key to the area’s corn and soybean production, especially crop insurance. That’s a familiar theme carrying over from previous listening sessions, and Illinois Republican Rodney Davis said that’s helpful to the committee.

“There’s a lot of consistency in the issues that our agriculture producers are bringing up,” Davis, attending his third listening session, told Agri-Pulse. “They may be different crops, but they’re consistent issues, which makes it easier for us as policymakers to address those consistencies.”

Davis – the representative for the state's 13th Congressional District, where the Farm Progress Show was held this year – also attended previous listening sessions in Minnesota and Texas. The committee has also held events in Florida and California.

Producers speaking at the session were as blunt as they were persistent in their calls for support of crop insurance.

“I want to leave you with six easy words to remember: crop insurance, safety net, no changes,” said farmer Troy Uphoff, speaking on behalf of Illinois Farm Bureau. Another farmer put it just as succinctly when he told the lawmakers “crop insurance is working. Don’t screw it up.”

“The most consistent thing said all day was ‘don’t mess with crop insurance,’” he said.

A number of speakers also urged the committee to do what it could to support conservation programs through the legislation. Some pushed for an increase to the Conservation Reserve Program’s acreage cap – 40 million acres, to be specific. Others just said that the programs are good policy and deserve the committee’s support.

“We’re both third-, fourth-generation farmers,” Heisdorffer said as he pointed to another ASA officer across the room. “We want to keep that going, and the only way you can do that is to take care of the soil. I think that’s why it’s such a big deal to farmers.”

One of the most poignant moments of the listening session came from the testimony of Kelly Hurst, a former user of the Supplemental Nutrition Assistance Program who went on to be an educator and school administrator. She used SNAP as a college student, when she and her then 3-year-old daughter needed the assistance. 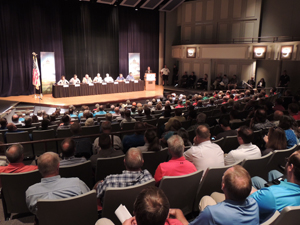 The audience filled an auditorium at Richland Community College in Decatur for the listening session.

“I am the face of someone that has used SNAP benefits in order to get out of some very tough times,” she said. Raising her daughter with the help of SNAP benefits, she said, taught her the value of nutrition.

“I just appreciate being able to have shown her exactly what it is that our nation is capable of doing when we care about our neighbors and when we feed them,” Hurst added.

A litany of other topics such as the foot and mouth disease vaccine bank, research funding, and animal welfare legislation were also discussed.

At this point, no other listening sessions are on the schedule. A committee source tells Agri-Pulse that could change, especially if the process is slowed by legislative difficulties on other subjects in September, when Congress will need to raise the debt ceiling and avoid a government shutdown.

Conaway reiterated a schedule that could place the farm bill on the House floor before the end of the year or early in 2018, and a committee markup would likely come about three weeks before that anticipated floor date. Rep. Collin Peterson, the committee’s top Democrat, said he and Conaway are prepared to begin their work.

“Mike and I are ready to go back and get this thing done,” he said.

In addition to Conaway, Peterson, and Davis, committee members Mike Bost, R-Ill.; Cheri Bustos, D-Ill.; and Glenn Thompson, R-Pa., attended the session. Darin LaHood, R-Ill, also sat in but he is not a member of the ag committee.