Californians are steadily ratcheting up their defenses against a potentially ruinous invasion of citrus greening disease.

So far, they are holding the fort.

Officials and growers in California have committed to a man-the-front-lines style of defense against both ACPs and HLB, starting with statewide surveillance for ACPs, spraying entire tracts of citrus trees where the tiny insects show up, quickly removing any infected tree and killing psyllids in all nearby citrus trees.

Pete Spyke, a veteran citrus grower who runs Arapaho Citrus Management in Fort Pierce, Florida, has been visiting California growers. Citrus greening has infected nearly all Florida orchards – cutting the state’s orange production in half since 2005 – and he suggests West Coast producers “should not do what Florida did,” which was to respond too slowly to HLB’s arrival, allowing it to get out of hand.

“What I am telling the California guys is ... if you find an infected tree, whether it’s a backyard tree or a commercial tree, you need to take that tree out of the ground, inspect the trees around it and remove all infected trees. You need to be all-in on early detection,” Spyke says.

That’s just what the California Department of Food and Agriculture (CDFA), USDA, and growers are trying to do. CDFA recently updated its action plan against ACP and HLB, including a new requirement that all citrus fruit shipments be in enclosed vehicles or tarped. It also plans to revise its quarantine zones, further restricting the movement of citrus between regions of the state.

“We’ve been fortunate in California,” said Melinda Klein, chief scientist for the California Citrus Research Board. CDFA and a growers-sponsored program have “focused on tracking and sampling and searching for infected trees,” she said. “The industry has worked very hard to limit the spread, and has done a lot of monitoring and trapping of psyllids.”

Despite the defensive program, the front lines of the battle have been busy. The psyllids have continued to pop up and have drifted as far north as Sacramento County. What’s more, CDFA’s Citrus Pest and Disease Prevention Program (CPDP) has identified and removed more than 100 infected trees so far, all from residential lots and all in Los Angeles, Orange and San Bernardino counties in the state’s southern end.

The HLB zones “are based on a five-square-mile radius around a detection,” explains Victoria Hornbaker, CFDA’s integrated pest control branch manager.

Hornbaker says she is constantly impressed “by how cooperative people are, both growers and residents. We are going onto people’s property, we are cutting pieces of their trees, we’re releasing biocontrol agents.” There are occasional objections or resistance, she said, “but for the most part, people get it; they understand the importance of protecting California citrus.”

The long-term outlook for California’s fight against HLB is mixed. 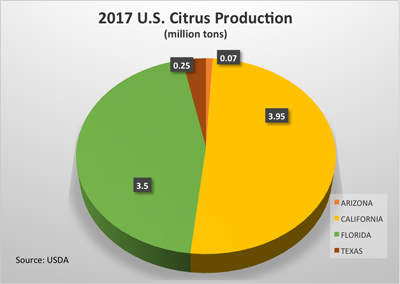 “There is a lot of work going on now toward developing HLB resistant and tolerant scions,” Hornbaker said. Researchers with the University of Florida, USDA, and the California’s CRB, cooperate in such work, but “it is really early in the stages for us in California,” she said.

Harold Browning, the chief operating officer for the Florida-based Citrus Research and Development Foundation, says researchers in Florida, Texas and California continue to produce new citrus strains along with pursuing HLB resistance, and more of the HLB work is being focused on California citrus. All types of citrus remain vulnerable to HLB to varying degrees, Browning says, and scientists haven’t yet developed any commercial citrus varieties with strong resistance to the disease. “We really don’t have a variety that is equivalent to a boat sitting on the pond with no holes in it,” he says.

However, while CRDF has no list of resistant varieties, some Florida farmers who’ve been fighting HLB report varying degrees of tolerance to the disease for some citrus varieties when they are nursed along intensely (with slow-release fertilizers, pest control, drip irrigation, etc.). A seedy variety of tangerine called Temple, for example, has surfaced as quite resistant, though it has little use commercially.

Spyke, of Fort Pierce, agrees with Browning’s assessment but notes that selection of the right root stock can help impart some HLB tolerance. He says he has gotten some strains to flourish on his farm despite the presence of HLB and psyllids. They include Page oranges (which are actually a tangerine-grapefruit cross), and some navel orange trees – the top variety produced in California.