Hurricane Harvey: Recovery for refiners and boost for renewables?

TEXAS, September 6, 2017 - The tremendous resilience of the Texas petroleum refining industry was reaffirmed Tuesday as refiners began restarting operations after the devastating effects of Hurricane Harvey.

Further affirmation came in the form of price shifts Tuesday. AAA reported that U.S. average gasoline prices peaked at $2.65 a gallon in the hurricane’s wake, up from $2.35 a month earlier. At the same time, with Texas refineries and the Colonial Pipeline that runs from the Texas coastline to the East Coast restarting operations and rebuilding demand for crude oil, crude prices bounced back from their post-Harvey lows. U.S. West Texas Intermediate (WTI) crude futures climbed to $47.40 barrel, up 11 cents. Similarly, the Brent global price for crude oil was up 10 cents Tuesday to $52.44 a barrel. In a reciprocal move, gasoline futures were down 3.5 percent to $1.69 per gallon from $2.17 on Aug. 31, wiping out the post-Harvey spike in prices. 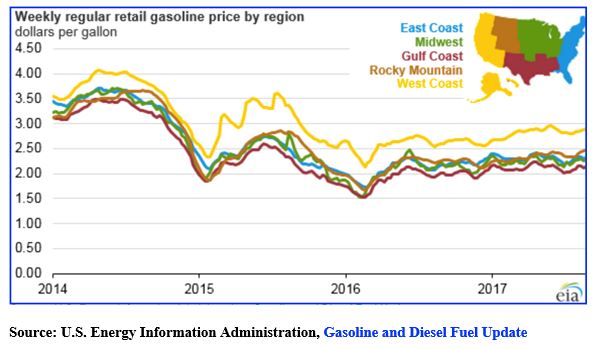 This return to more normal pricing comes despite earlier warnings that the refining capacity along the Gulf Coast – home to about half of U.S. petroleum refining capacity – could take weeks or even months to recover. Just 10 days after Hurricane Harvey made landfall in Texas, the U.S. Department of Energy (DOE) reported on Sept. 4 that “Eight refineries have begun the process of restarting after being shut down,” representing 18.3 percent of Gulf Coast refining capacity and 9.6 percent of total U.S. capacity. DOE noted that at least four other Gulf Coast refineries had resumed operating although at reduced rates.

At the peak of the oil-industry disruptions caused by Harvey, DOE reported on Aug. 31 that 10 Gulf Coast refineries remained shut, with six beginning the process of restarting. DOE warned then that this restarting “may take several days or weeks to start producing product.”

As concern over constricted gasoline supplies and spiking prices rose, renewable fuels advocates called on the EPA to remove normal summer restrictions on the use of E15 (15 percent ethanol). In an effort to make more fuel available at the pump, EPA complied, waiving the RVP (Reid Vapor Pressure) regulation that normally would have remained in effect until Sept. 15 due to concerns about fuel volatility and emissions during warmer weather.

In response, the Renewable Fuels Association welcomed EPA’s waiver, explaining that it was needed to provide “a badly needed source of additional supply and helping to offset gasoline shortfalls resulting from refinery and terminal outages.”

The Federal Emergency Management Agency (FEMA) also acted quickly in response to fears about gasoline price spikes. FEMA dismissed “rumors that the fuel shortages in Texas are due to either FEMA blocking sales or fuel being committed elsewhere” as false. “It is true that there are sporadic and localized fuel supply disruptions in the Southeast and Texas due to the impacts of Hurricane Harvey,” the agency said. But it pointed out that “With tight supplies due to Hurricane Harvey impacts, gas stations that purchase fuel on the open market may not be able to acquire fuel supply since pre-existing supply contracts will be met before gasoline is placed in the open market.”

FEMA said other factors affecting supplies and prices include “refinery damage, preemptive shutdowns, damage to fuel terminals, and restricted port access for oil delivery in the region.” It added that DOE “authorized the Strategic Petroleum Reserve (SPR) to negotiate and execute emergency exchange agreements” to provide more petroleum for commercial use and acted with EPA to waive limits on fuel supplies for the Colonial Pipeline. 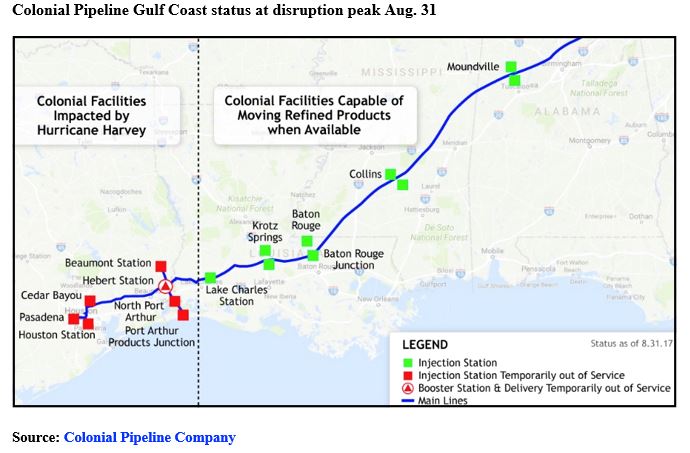 Along with offering storm-battered Texans his thoughts and prayers, biofuels advocate Ernie Shea calls Harvey and its costly aftermath “predictable” and “not a one-time event.” He points out that “the climatologists are telling us to expect more intense weather events” across large regions of the country. “Watch out for Irma coming next,” Shea said referring to the hurricane now threatening South Florida.

Shea, president of Solutions from the Land, says that as horrible as Harvey has been, “our scientific partners are saying be prepared for increased frequency of these types of weather-related disruptions.” He tells Agri-Pulse that “it’s unfortunate it takes a crisis to remind people” of the urgent need to transition as quickly as possible from fossil fuels to low- or zero-emissions renewable energy including ethanol, biodiesel, other biofuels, wind, and solar power.

Shea also points out that the U.S., as a whole, will continue to suffer gasoline price spikes and other disruptions as long as U.S. energy policy is driven by “legacy fossil fuel interests that want to see their monopoly on the liquid transportation fuel market maintained” and “an oil industry that focuses so much of its processing and exporting in a region that has, and will likely continue to remain, susceptible to calamitous weather episodes.”

Shea cites vital energy and national security gains from the shift to renewables that’s already under way. He notes that as with wind and solar facilities, “one of the multiple benefits of the ethanol and biodiesel industries is that they are distributed across a much larger geographic area, so they are not as vulnerable.”

Escalating this economic and national security risk, increased evaporation from the warmer Gulf water virtually guarantees that rainfall along the Texas and Louisiana coasts will be heavier and more persistent than in the past, scientists say. With Harvey responsible for at least 60 deaths and economic damages that could top $200 billion, flooding remains a severe problem more than a week after Harvey’s Aug. 25 landfall.

One consequence could be that more communities, businesses, and policymakers come to understand the Gulf Coast connections linking greenhouse gas emissions, warmer water, devastating storms, and persistent flooding. Green energy advocates say the next step could be increased understanding of the need to shift from fossil fuels toward greater use of renewables.