WASHINGTON, Sept. 13, 2017 – Hurricane Irma has devastated sugar cane and citrus crops in Florida and potentially spread citrus diseases such as canker and black spot from quarantined fields to healthy ones.

Officials from the Florida State Department of Agriculture and Ryan Weston, CEO of the Florida Sugar Cane League, stressed that preliminary damage assessments are not yet available and will not be until at least Wednesday, as the full extent of the damage to fields is still being evaluated.

The storm surge, combined with 130 mile-per-hour sustained winds, affected the sugar cane crop in the Southeast part of the state, with its characteristically tall stature, said Stewart Swanson of the University of Florida Extension Service. The width of the leaves when they are horizontal also disrupts the photosynthesis of the plants in the field, which affects growth, he said. 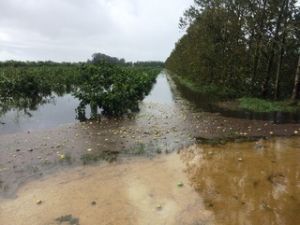 Winds took the top shoot off of the plants and created what’s called Apical dominance, a process whereby secondary side shoots start to take over the plant, Swanson said. These secondary shoots will then start to rob sugar from the mother plant.

“You also lose the ability to harvest the plant when it is all twisted and laying down,” Swanson said. “Stalks from one row are tangled up, and when we harvest it, it can pull plants out by the roots. That will affect yield next season, and cause us to lose plants per acre.”

Seed cane for planting into new fields also cannot be harvested mechanically and will likely have to be done by hand, which will drive up costs to as much as $125 per acre, Swanson said.

The citrus industry is worried about the potential for the winds to have blown diseases such as canker and black spot from quarantined fields in South Florida to healthy plants, said Florida Farm Bureau Secretary Steve Johnson.

Citrus growers in St. Lucie and Indian River counties said they have experienced a 50 percent grapefruit loss, a 25 percent navel loss and a 30 percent Valencia loss, said Garima Kakkar, University of Florida Fruit and Alternative Crops Agent. There will likely be more of a drop in the coming weeks as stems have weakened, she said. Most of the growers reported flooding as the main issue to tree health, and some have reported blown trees in the groves, Kakkar said.

In Hardy and Desoto counties, some producers have lost upwards of about half of the crop in some locations if they were right at the very center of the storm, said Citrus Extension Agent Stephen Futch of the University of Florida.

The citrus and cane industries combine for over $9.5 billion of economic impact, according to the Florida Agricultural Statistics Service. In addition, Florida produces about half of the U.S.’s sugarcane for production and seed and is worth well over $500 million annually, or 6 percent of the state’s total agricultural output.

Experts say that rehabilitation of impacted sugar cane and citrus fields will likely take months, and harvesting is now being delayed.