WASHINGTON, Sept. 15, 2017—Florida citrus growers have a lot on their hands – literally – as they begin to pick up the pieces from the devastation of hurricane Irma: Their oranges, grapefruits and tangerines, once a prominent part of the trees they grew on, are littering the ground as waste in waist-deep water, remnants of an industry that is now 50 percent decimated, with statewide losses estimated to exceed $1 billion, according to University of Florida Extension Agent Gene McAvoy.

The brunt of the storm’s impact on citrus crops was felt around Naples and in the smaller neighboring agricultural community of Immokalee in Collier County and north into Sebring, running up highway 29, in Highlands County, McAvoy said.

Damage is also very acute in Glades County, where localized losses to specific farms were between 70-80 percent of the total crop, Florida Farm Bureau Treasurer Steve Johnson said. It will take some two weeks for electricity to return to areas hardest hit.

“I would consider the damage to be unprecedented,” McAvoy said. “I’ve been around Wilma, Francis, and Charley, and this is much worse. Fifty to sixty percent of the citrus crop statewide is on the ground. In some localized cases, it is as high as 90 percent.”

Lisa Lochridge, director of public affairs at the Florida Fruit & Vegetable Association, said that damage estimates for citrus groves “vary widely, depending on the area of the state hit.” The damage in South Florida is more severe, with 30-70 percent crop loss there, depending on the region. “Losses are slightly less going north, but Irma cut a powerful swath through the epicenter of Florida’s citrus-growing region,” Lochridge said in a statement.

The water-logged fields are a breeding ground for several types of disease and serve to make an already difficult situation even worse: citrus greening, a disease originally brought to Florida from China, and known there as the ‘yellow dragon,’ has trimmed yields by 60 percent across the state since 2000 and made things challenging for growers. Now, the standing water will add to mounting losses from greening, which have lowered prices considerably.

Phytophthora, a disease characterized by roots that girdle and disintegrate, results from roots being deprived of oxygen, something exacerbated by the heavy amounts of water, Johnson said. In many cases, water cannot be removed immediately because there is already so much that is standing in retention areas adjacent to cropland, and because the dikes are failing, water is flowing back into the flooded areas, McAvoy said.

Canker and brown spot, which spread by warm, wind-blown rain, continue to be a problem and will also increase because of the storm.

The storm has also taken a toll on the residents who depend upon the agricultural economy, especially in counties like Hendry, where 78 percent of the adult population works in agriculture. 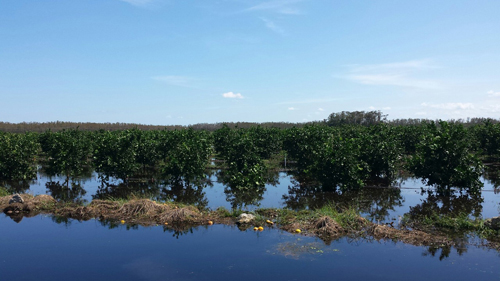 The sugar cane industry is “very much in recovery and assessment mode,” said Ryan Weston, CEO of the Florida Sugar Cane League. “We are still waiting for water to come off the fields” to get a better sense of the extent of the damage. He said he is grateful that USDA Secretary Sonny Perdue will be visiting the state and has been in touch with Ray Starling, special assistant to the President for Agriculture, Trade and Food Assistance, and Heidi Green, Perdue’s chief of staff.

“We’re going to have to look at all avenues (for assistance to growers) after the assessments are in,” Weston said, after noting that crop insurance for cane growers provides “pretty minimal” help.

“You have to suffer 50 percent damage and then you get 55 percent of the price,” he said.

Irma also wreaked havoc on other fruit and vegetable crops. In particular, Lochridge said “there was damage to (tomato and strawberry) fields that were about to be planted in south and central Florida – primarily plastic ground covering and irrigation systems ripped up. Fields are flooded as well. As a result, the tomato crop is expected to be light at the first part of November, but volume should build and we expect a solid December.”

Labor shortages could become a problem as growers try to recover from Irma. “A big concern for growers is finding available workers to help them in their recovery efforts,” Lochridge said. “The labor supply was already very tight, so this is also an issue they’re dealing with.”